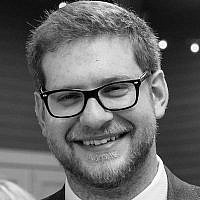 The Blogs
Jared Skoff
Apply for a Blog
Advertisement
Please note that the posts on The Blogs are contributed by third parties. The opinions, facts and any media content in them are presented solely by the authors, and neither The Times of Israel nor its partners assume any responsibility for them. Please contact us in case of abuse. In case of abuse,
Report this post.

What does our Judaism demand of us, in the sadness, grief, and danger of this moment?

This statement grates on modern ears. Because it seems to strip a person of their autonomy over their body. But what this principle does in practice, is it obligates personal autonomy, rather than undermine it. In Jewish law, the prevailing principle is: a person’s heart knows its own bitterness. A person is given ultimate trust to determine the physical, biological, psychological, financial, and emotional calculus that binds them to a course of action within Jewish law. In Judaism, there is no singular course of action, nor is there a binary choice. Each human being has a unique, valid, and complex set of circumstances, and they have a responsibility to act according to the best interests of their own health.

Why? Because the prime directive in the Jewish religion is to preserve life. And preserving life is not just about physical health. Jewish law considers mental health and psychological health to be deeply intertwined with a person’s physical well-being and obligation to their own life. Keeping a person’s body, mind, and soul aligned is considered to be equivalent to preserving life.

A person’s heart knows its own bitterness. The Talmud invokes this biblical proverb to explain that a person has autonomy to decide if they are physically and psychologically well enough to fast on Yom Kippur, considered the most serious ritual obligation over the course of the Jewish year. Judaism requires that we entrust each human being to navigate their own personal pain and struggle. We as a community or as a government have no right to impose on a person’s responsibility to their own health. In other words, even within a context of personal obligation, Judaism requires consent.

Certainly not all Jews identify as pro-choice, that is clear. This stance within Jewish law is not meant to enforce abortion or outlaw abortion. Just as a person may not be restricted from their access to abortion, a person may not be compelled to terminate their pregnancy against their will. The decisions of pregnancy and abortion are deeply private and personal decisions, and these decisions must be made by the birthing person, with the support of a doctor and people they trust. Judaism affirms that these decisions are unique for each individual; they do not belong within the realm of legislation.

Because the heart knows its own bitterness. And to compel a person who is pregnant to carry and deliver a child against their will is an assault on their human rights, and a violation of the Jewish religion of the highest order.

Even the most traditional Jews, who do not identify as pro-choice, have affirmed that abortion bans are a violation of Jewish law. The Orthodox Union, a confederation of American Orthodox rabbis, issued a statement opposing absolute bans on abortion, because of the Jewish legal responsibility to terminate a pregnancy that will cause danger to the birthing parent’s physical or mental health. [For an eloquent explanation of the Jewish legal reasoning behind permitting and, in certain cases, requiring abortion, please read Rabbi Maya Zinkow’s article.]

We have a principle called Dina d’malkhuta dina, that Jews must abide by the law of the land. However, we also know that our forebears opposed and undermined unjust legislation. Each year at the Passover seder, we recall rabbis who stayed up all night ostensibly discussing the story of the Exodus from Egypt, when we know in reality they were plotting the overthrow of their Roman oppressors within a Jewish idiom.

We do not need to plot rebellion in order to invoke the power of our religious freedom. Legislators, clergy, and health care providers who oppose abortion are not afraid to call upon Christian scripture as justification for denying abortion access and birth control to those who need it. As Jews, we cannot be shy about calling upon our own Jewish sources to justify the abortion access that our religion demands of us.

State bans on abortion will imminently prohibit the free exercise of the Jewish religion. What does our Judaism demand of this moment? Certainly we must continue to work toward political solutions, and financially support health care providers who preserve access to the fundamental human rights of abortion and sexual health care. But how can we leverage our own Jewish institutions to provide much needed human services? When Jewish immigrants first came to America, our first institutions were devoted primarily to mutual aid and social services – communal support that the unstable, transient, and impoverished Jewish community could not access anywhere else. We should begin to identify Jewish religious spaces that can provide free pregnancy testing, birth control, emergency contraception, and education about sexual and reproductive health. Our Jewish religious spaces should be coordinating the shipment of medication abortion into states where these medications cannot cross the border. Jewish geography is no longer a game; it is a call to action. Our responsibility to preserve life compels us to provide these fundamental human services to all people who need them, whether they are Jewish or not. And it ought to be within our constitutional right to establish synagogue-housed abortion clinics for all Americans who have nowhere else to turn.

We have to continue to make it known, widely: the Jewish tradition supports abortion as part of a person’s responsibility to preserve their own life and health. Any argument you may hear that qualifies when Judaism does or does not approve of abortion is a distraction from the reality that any state abortion ban is a violation of Jewish law. The human rights of anyone who is pregnant or can get pregnant are under assault, and in denying them the right to preserve their own life and health, state governments are putting the free exercise of Jewish religion under assault. We must enlist legal experts to educate ourselves as to the full extent of our legal power as a religious community. As our country descends into deeper moral poverty, we as Jews have a unique responsibility to help fill that void.

About the Author
Originally from Cleveland, OH, Jared Skoff is a student at the Ziegler School of Rabbinic Studies at American Jewish University in Los Angeles.
Related Topics
Related Posts