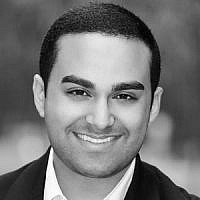 The Blogs
Matthew Lavi
Apply for a Blog
Advertisement
Please note that the posts on The Blogs are contributed by third parties. The opinions, facts and any media content in them are presented solely by the authors, and neither The Times of Israel nor its partners assume any responsibility for them. Please contact us in case of abuse. In case of abuse,
Report this post.

The past few weeks have been tough. First, the loss of three innocent lives. For the first time I wasn’t filled with anger, just sadness. And now we are faced with rocket attacks that have led to ‘Operation Protective Edge.’ My brother, who is currently a participant on Birthright, called me from a bomb shelter in Jerusalem the other day.  My cousin who’s on a short term program slept overnight one. My friends in Tel Aviv were running into nearby shelters as I was texting them. I spend a lot of time thinking ‘why’. When we hear news like this we must wonder why. We want to know why horrible unjust kidnappings, murders, and situations of the like happen. I have come to a disturbing yet interesting conclusion.

Since the beginning of history the people of Israel have suffered. We have always reflected on how our people have been persecuted from the days of Egypt as slaves to the austerities of the Holocaust. Today is no different. We’ll look back on this time a hundred years from now and remember how we suffered from heinous murders like the three innocent boys. In the early 2000’s it was suicide bombings. Nowadays it’s kidnappings like the Gilad Shalit ordeal. There will always be something. Tragedies like these bring Jews and the people of Israel closer to one another. We are the largest closest community. Maybe we’re meant to suffer and face persecution as a people until the end of time. It brings us closer and forces us to be stronger lovers and advocates for Israel. Imagine for a second if there really was peace. I wonder if Israel would be so beloved by millions across the world or if people would jump to defend its right to exist as much.

Having said this, we shouldn’t give up the fight for peace. Our ultimate goal must be peace and stabilization of the region. Many people say making peace is the answer. I’d like to believe that but find it hard to make peace with people who only want our destruction. When your enemy can’t adhere to moral and international rules, there is no fair fight. It’s sad that the few (Hamas) have to ruin it for all. Real Palestinian advocates of peace need to stand up and fight against this hate their people spread. The people of Palestine who really believe in constructing a state that can live alongside the Jewish state need to push their way to the front and become the real partners of peace. They need to fight to de-legitimize Hamas and Hezbollah. Nothing can be solved with leaders who only want Israel’s destruction.

There are only two roads to choose from. We either continue to live in a world of pain and suffering on both sides of the border, or we find peace. We find a solution. The only way this can happen is if the right representatives are working to form this solution. We can see who represents the people of Israel clearly. Having formed one unified government, Israel is one step closer to making peace. The Palestinians on the other hand have many different factions and leaders, which doesn’t allow them to move forward. They need to find real representation that will make obtainable demands and fight for realistic goals. The more these terrorist organizations continue to receive funding and grow, the more they sadly gain legitimacy. Hamas and Hezbollah need to be treated as the outrageous terror-driver organizations they are by their own people. Once Palestinians can cut them off like the dead weight they are, maybe we can inch a tad bit closer to the glimmer of hope we call peace.

Regardless of all this, Israelis are the strongest people I know. The current situation has not stopped them from enjoying the beautiful warm waters of the Mediterranean or going out to enjoy a drink at a local pub. They will continue to live their lives and choose to only be inconvenienced. That is how Israel is able to survive today, support of its citizens. The second line of defense are people who make Aliyah. Therein lies another set of heroes and real advocates. The people who choose to go to Israel even though they may be warned by outsiders not to. What others don’t understand is how amazing the quality of life really is. Because life is so valuable people choose to enjoy it so much more. Maybe what doesn’t kill you really does make you stronger.

About the Author
Matthew is a 25 year old Los Angeles native who has been to Israel over a dozen times. Matthew helped form and lead the pro-Israel organization on his university campus. Following graduation he became president of LedorVador, a non-profit Jewish youth organization. Matthew began leading Taglit Birthright trips over the past three years. The joy of guiding fresh new faces to Israel was extremely rewarding. After his latest trip in the summer of 2013 he decided to stay and work at a high tech start up in Tel Aviv. Becoming fully immersed in Israeli culture solidified his devotion to the land. An unfortunate leg injury brought Matthew back Los Angeles.
Related Topics
Related Posts
Comments