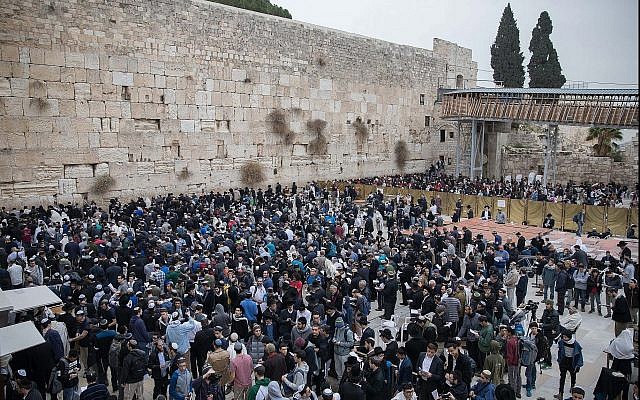 Illustrative: Jews gather at the Western Wall in Jerusalem's Old City to pray for rain, on December 28, 2017. (Flash90)

Among large sections of American Jewry, there is a real question today about how much Israel is home to them”
— Alan Hoffman, director-general of the Jewish Agency, speaking in Ha’aretz, 22 January 2018

I had to fill out a form recently for one of my kids. It asked whether said child was White, Hispanic, Asian or Pacific Islander, Black or African American or Hawaiian. And, as is the case every time I encounter one of these questions and there’s no box for “other,” I’m stymied.

Is this really worth bothering about? They most likely want to know if I tick off any of the enumerated “non-White” categories, anyway. And while I’ve never experienced myself as White per se, I understand the privilege that I have. That I have benefited in so many ways by virtue of my not being seen as belonging in one of those “non-White” boxes.

My hand hovers over that “White” box, me wondering if I’d ever really be able to pass, to effortlessly belong. In the end, I decide to leave it blank. I defy categorization, I am my own woman, I think. Or, maybe it would be more true to say — I never fit in.

This. This is what Israelis fundamentally misunderstand about Diaspora Jews. The feeling of being connected to something, deeply, but never truly being of that thing. Of having our fates tied to decisions made by people who may, or may not, have our best interests at heart. Of always, no matter where we are, experiencing ourselves on the outside, looking in.

There are benefits to being on the outside, peering in through the windows. The Torah needs to constantly remind us that we should take care of the stranger, because we were once strangers. But those of us in the Diaspora feel it in our bones. We don’t remember what it is to be strangers. We are strangers, still. Perhaps this explains why so many American Jews consistently vote against their economic self-interest. It is most certainly the reason we have dominated fields like comedy and cultural criticism. The best critics and observers are just that. They observe from the outside, where it is easiest to see the forest for the trees.

The question is even more complicated when it comes to Diaspora Jews and Israel. We are told again and again that Israel is the home for ALL Jews. And then, when we comment on the way some Jews are being treated in said homeland, we hear that we have no right to comment. That we don’t understand what it means to live in Israel.

Maybe. All told, I’ve spent about four years of my life in Israel. It’s not the same as living there all the time. I make no claim that it is. But it is enough that I’ve experienced a lot of the things that I’m told I can’t possibly understand. I’ve been scolded for buying the wrong thing in the line at the grocery checkout. Been flummoxed by the unwritten expectations and assumptions as a parent (for 16 years) at Israeli summer camps. I’ve had the plumber enter my apartment, and, before even the pretense of getting to work, demand that I bring him a cup of coffee. I have been spit on because I walked a block in the wrong direction wearing (gasp!) short sleeves. I have spent hours blocked in a building while police thwarted a terrorist attack. I have run with my children into a bomb shelter and lied to their faces that everything would be okay. And I have felt the anxiety as my teenagers contemplate going into the Israeli army, where they won’t have their parents to come home to for laundry and coddling on Shabbat.

And still, I am told nearly daily, I do not belong. At least not enough to have my own concerns voiced when it comes to how my fellow liberal Jews are treated by their very own government. That I can’t comment on coalitions or defense spending, international alliances or corruption. Because that is for those who have committed themselves completely to the Jewish state. Even my clear eyed insights, gleaned because I can sometimes visualize the whole picture, are of no use. My bird’s eye view is a curiosity, nothing more.

But the Kotel, you told me the Kotel belonged to me. You told me that it belonged to every Jew, everywhere on the face of the earth. That it was a symbol of how “kol yisrael areivim zeh bazeh,” all Jews are responsible one for the other. And I wanted so badly to celebrate that fact, and I arrived, prepared to thank God for my many blessings in the best way I know how, with a Torah and a tallit and a voice loud with song, in thanksgiving, and not in provocation, and you said, NO. Even here you do not belong. There is no small corner of the Earth where you can say you are truly at home. This is OUR home and we will not honor your customs, because all you ask for — you ask for in greed and self-centeredness, and for that you will never call this place your own.

And my liberal friends point out to me — you never really believed that the Kotel was a place where a Jew could be closer to the Divine. You worried that it might be a symbol of idolatry. That no set of stones has the power to give Jews a leg up when they beg for help. Or forgiveness. Or mercy. It’s just a symbol.

And a symbol it is. For Diaspora Jews, the Kotel was a symbol not only of God being close to us here on earth, not only of our shared history, but of a place where there was no “us” and “them.” A place where we could finally tick the box that said “Jew” and that would be sufficient. No, Israel tells me. That is not your box to check. Even here, your box is “outsider,” your box is “doesn’t quite belong,” your box is “other.” And if you can’t find one of those boxes, just as well to leave it blank.