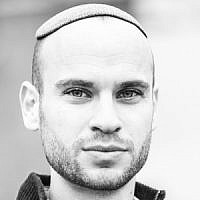 The Blogs
Natan Davidovics
Apply for a Blog
Advertisement
Please note that the posts on The Blogs are contributed by third parties. The opinions, facts and any media content in them are presented solely by the authors, and neither The Times of Israel nor its partners assume any responsibility for them. Please contact us in case of abuse. In case of abuse,
Report this post.

I read an article earlier today about a Palestinian Catholic priest organizing aid for Gazans impacted by this latest round of fighting. He was surprised to discover that around half of the 600-700 donors — donating things ranging from diapers to their blood — were Israeli Jews. Israelis are famous for the way they help those in distress around the world, be it Haitians who survived a massively destructive earthquake, residents of the Philippines recovering from category 5 typhoon Haiyan, or injured Syrian refugees. They now have the opportunity to help another neighbor in distress — the civilians in Gaza who have lost loved ones and have had their lives turned upside down.

You can blame Hamas for using these people as human shields, or you can blame Israel for using disproportionate force, but either way the civilian population of Gaza are the ones who have suffered. Yes, the majority of them voted for Hamas in 2006 and it’s possible that many of them wish harm upon Israelis and even Jews in general (I’m sure many more so after this current conflict), but does this mean they deserve to suffer like they have? Is feeling hatred towards somebody (if that is what they feel) a punishable offense? This is war. People are dying. It is difficult to blame either side for hating the other during this time of heightened emotions. Just like German civilians during WWII who wished harm upon Americans did not deserve to die for their feelings, so too Gazan civilians who wish harm upon Israelis don’t deserve this kind of punishment.

The IDF asserts that they do not target innocent civilians and that they painstakingly go to great lengths to minimize such casualties (warning civilians ahead of impending attacks even though this also warns Hamas militants, holding off attacks altogether because they would have resulted in too many civilian casualties, sacrificing ground troops instead of using air attacks in order to spare civilian lives, etc.). Nothing would prove that Israelis care about the lives of Gazan civilians more than ordinary Israeli citizens voluntarily donating to helping out Gazans as they recover and rebuild from this month-long conflict that has devastated so many lives. I’m not talking about the Israeli government here. That could be construed as a shrewd political maneuver by the Gazans instead of a gesture of goodwill. I’m talking about everyday Israelis rising up en masse and trying to do something to better the situations of those that have suffered, on both sides of the conflict. Giving blood, collecting food, toys, diapers and other necessary supplies, and even writing letters are all steps in the right direction. Israeli companies can donate lotions or fruit juice to the cause. None of this will replace what has been lost. But every gift can have a positive impact.

Performing acts of kindness and generosity often take time and energy that most people find difficult to give. They are rightfully busy with their own lives and their own problems. But even those with limited time can contribute and make a difference. I just came across an internet campaign started by an Israeli named Gershon Baskin (well-known for negotiating with Hamas for the release of Gilad Shilat) called “Emergency Food Aid for Gaza.” The goal of this campaign is to purchase surplus potatoes from Israeli farmers (that will be destroyed this Sunday if not purchased) and ship them to the most needy in Gaza. All funds contributed to the campaign will go directly towards this purchase. The funds must be committed by Saturday, August 16, 2014. This is a concrete and simple cause that all people, regardless of ethnicity or religion, can and should contribute to. So far, around $50,000 of the $730,000 goal has been raised. I hope that Israeli Jews can put aside any anger they might feel and reach out to their neighbors in need by leading the charge in this campaign (which helps both Israeli farmers and poor Gazans), in addition to coming up with other ways to prove that Israelis really do not wish harm upon innocent Gazan civilians.

Hamas is claiming victory. This may seem like a twisted view of reality when the people they supposedly represent have suffered so much, but in a sense, they have won. With all of the carnage and hopelessness in Gaza now, more and more will likely turn their anger against Israel and support Hamas, sowing the seeds for the next conflict and the next conflict and so on. Obviously, there are many significant hurdles to peace between Palestinians and Israelis. But maybe if the Gazans could see how caring the Jewish people can be – not just 300 of them but millions of them – they may see that the light at the end of the tunnel is not a rocket on its way to an Israeli city, but it’s a thriving future with peaceful neighbors. And if I’m wrong and this kindness is met with more hatred, then what have the Israelis lost by striving to live in the charitable way in which the Torah dictates?

About the Author
Natan Davidovics grew up in the New York area and currently resides in Baltimore, MD. He writes on topics ranging from philosophy to science to politics.
Comments