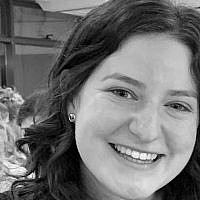 The Blogs
Jodi Fishbein
Apply for a Blog
Advertisement
Please note that the posts on The Blogs are contributed by third parties. The opinions, facts and any media content in them are presented solely by the authors, and neither The Times of Israel nor its partners assume any responsibility for them. Please contact us in case of abuse. In case of abuse,
Report this post.

I remember the first time I heard that word so clearly.

On 1 September  2018, I took my first steps into the building that would become my home for the next two years. It wasn’t the campus of the University that I had applied and been accepted to just the previous year, nor was it a  Seminary where I would spend some time learning and growing.

No, it was the place where I had chosen to serve Sherut Leumi, the Ministry of Foreign Affairs. As I crossed through the doors, I immediately felt out of place. My American “business formal” outfit, my hard ל and soft ר, and my clear lack of understanding of the Hebrew language were definitely among the contributing factors. But the biggest difference was that while every other new Bat Sherut was being dropped off by her family members, who she would kiss goodbye and see at the end of the week, I walked in completely alone.

With a facade of confidence, I strode up the stairs to my office. When I walked in, my direct bosses greeted me with a smile and a welcome speech in English. But as I turned to set up my new cubicle I heard one boss whisper to the other

מסכנה. A word that I’ve come to both  hate and identify with. After a search on Morfix, I found out that it literally translates as “poor girl,” in other words, nebach. I felt a bit embarrassed that my bosses thought I was some pity case, but on paper it does seem like it. A young girl, alone in a new country, with no place to call home but her grimey Sherut Leumi apartment, saddled with all of the responsibilities of adulthood- when she could have been living the stereotypical American dream. But I figured that it was the first day, and I had yet to show them what I was made of- I would prove their presumptions wrong.

But as time progressed, I realized that it wasn’t going to be a fight-of-proof against just them.

Polina the janitor. Roni from the cafeteria. Naomie from the legal division. My rakezet, my roommates, my fellow bnot sherut. Each and every one of them has has had the same reaction when I tell them that I’m a בת שירות בודדה.

Unfortunately, the infrastructure for Lone Bnot Sherut is wobbly. There is no budget for Bnot Sherut in Israel in general, let alone the small group of us from חו”ל. Our apartments are not equipped with the basic appliances and amenities that we were promised, but often are stocked with the ones that we weren’t- mold, grime, and power outages. We are externally looked up to but practically looked down upon by our Israeli counterparts, who perceive us as fools for leaving “insert-country-here”. There are  few people to turn to when we get sick or have problems setting up our governmental and daily lives here. And when we are most in need of a hug, we have to wait until the next time we see a friend going through the same situations that we are encountering.

Us floundering and lonely 19-20 year olds are tasked with the almost impossible task of landing on our feet here in every aspect. And even when we do, we are still regarding as מסכנות solely because of what people perceive our situations to be.

It’s time for that to change.

I and many other girls serving the country here have fallen into the trap  set for us the second that someone calls us מסכנה- we believe it. We complain and stress over things that are totally worthy of complaint and stress, but fail to recognize that the power to overcome these issues and inconveniences is within our grasp. Like the Jewish slaves in Egypt, we have begun to adopt that same perspective the general public has of us- we are stuck, powerless, and alone.

I’m not saying that this will be an easy fix. Everyone who has written pieces prior to this one has voiced valid opinions. Trust me, I’m in the situation too, and I can tell you with no doubt that the next year and a half of my service will have some frustrating and sucky parts to it.  I will still struggle over my hebrew, my apartment will still be gross, and I will still be here as a בודדה.

But I will not take any of it sitting down.

When my dad came to visit a few weeks ago, I told him the story of how the janitor for my wing of the Ministry still calls me מסכנה. He thought it was funny at first, because I never was a “weak” kid- always with a stubborn streak and capability to make things work in my favor. But then he started to get frustrated- who are they to put me in a box? To deem me as “poor girl” before they even see what I’m made of?

As I hugged him goodbye before he headed back to the States, he whispered the following to me

“Don’t listen to them. You are strong, you are capable, and you are made of thicker stuff than you know. Redefine what מסכנה means, so that when they write your biography, מסכנה will be the title.”

Lone Bnot Sherut  live on the periphery of the Israeli public’s vision. They will not be buying us mold-free apartments, paying us more than our meager salary, or even ensuring that we can get to the doctors office on our ימי מחלה. And though that isn’t fair, it is the reality.

Yes, the infrastructure is wobbly- but it is up to current and past lone bnot sherut to fortify it. We need to realize that there are things that are within our control, and that we can band together to support ourselves and each other against  the things that are not. We need to make our voices heard by the organizations that will actually listen. We need to network amongst ourselves to ensure that the future Lone Bnot Sherut don’t encounter the struggles and hardships that we may have had to. We need to stop complaining and start doing.

And most importantly? We need to redefine מסכנה.

About the Author
Jodi made Aliyah from New Jersey in December of 2017. After a year in Midrasha, she is serving as a Bat Sherut Bodedah in the Ministry of Foreign Affairs in Jerusalem.
Comments