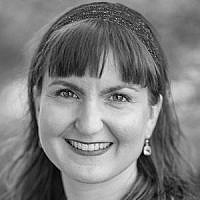 The Blogs
Leah M. Kahn
Apply for a Blog
Advertisement
Please note that the posts on The Blogs are contributed by third parties. The opinions, facts and any media content in them are presented solely by the authors, and neither The Times of Israel nor its partners assume any responsibility for them. Please contact us in case of abuse. In case of abuse,
Report this post.

In 1936, Martha Graham, the highly influential American modern dancer, declined an invitation from the government of Nazi Germany to perform at the International Dance Festival, part of the Olympic Games in Berlin. By representing the US at the festival, she would have enhanced her fame and her prospects for substantial financial support. She refused. Martha knew that the Nazis were already persecuting Jews and other minorities. She wrote to Joseph Goebbels, the German propaganda minister:

I would find it impossible to dance in Germany at the present time. So many artists whom I respect and admire have been persecuted, have been deprived of the right to work for ridiculous and unsatisfactory reasons, that I should consider it impossible to identify myself, by accepting your invitation, with the regime that has made such things possible. In addition, some of my concert group would not be welcomed in Germany.”

Several members of her group were Jewish. German authorities insisted that all of Graham’s dancers would be treated respectfully, but she refused to put them at risk, even for an opportunity that would attract such public attention. As a Jew, an American, and a dancer, Graham’s concern for her dancers always moved me, but I gained an even deeper appreciation after living in Israel for a few years.

When my husband and I moved to Israel, we left behind a vibrant Jewish life in Chicago, with an amazing community, close friends and great jobs. We moved to Israel because we wanted to be a part of the contemporary Jewish State in real time. Unlike many Jews who fled their home country for fear of their safety, or the ability to live Jewishly without fear of persecution, we went there by choice. Like many young Jews in America today, I do not have the memory of the founding of the State of Israel, I didn’t experience the fear of the global Jewish community during the war of 1967 and I wasn’t born when the mass Russian aliyah happened in the 1970s. I’ve never been the target of serious anti-Semitism, despite the fact that, growing up in small town Ohio, I was one of only five Jews in my school, and my non-Jewish friends were consistently interested in learning about my heritage.

In the States, I observed and practiced Judaism freely and without fear. In Jerusalem, the communal experience was much different from my American Jewish experience — it is a community formed by being the majority. The flower guy on my corner was always there to wish me a “Shabbat Shalom” on Fridays; I could ask the cab driver how his seder was during Chol Hamoed Pesach; on Chanukah, I saw chanukiot in almost every window; and I discussed Yom Ha’atzmut with my beautician while she waxed my eyebrows. These experiences expanded my understanding of how living in a society where Jewish life is fully in the public sphere can affect my modern Jewish identity. But what really drove it home was being a dancer in Israel.

I studied dance in college and fell in love with Shabbat in my 20s. In the States, performances are almost always on Friday and Saturday nights. Even though it’s not completely in the “spirit” of the day, I am comfortable performing on Shabbat and I don’t have to break any halachot to do so. (Thank God I’m not a musician!). If I were not willing to perform on Shabbat, I would have to sacrifice months of a rehearsal process that I deeply love. However, I still have to make accommodations. During performances, I walk when the theater is close enough and stay in hotels near the theater when they aren’t. I bring grape juice and challah so I can make the blessings in my dressing room before going on stage. In the past, when I told my choreographer about my religious practice, I worried about them thinking I was weird. I worried about my professionalism — what if they couldn’t get in touch with me on a Saturday afternoon before a performance because my cell phone was turned off until sundown?

I’ve been lucky to work with some great people who were interested and non-judgmental, but explaining my spiritual practices to people who are unfamiliar with the concept of Shabbat felt like opening up something very personal early in the artistic process. I could make it work for sure, but to “live in multiple worlds,” it took a lot of juggling. I guess that’s the reality when one doesn’t fit neatly into a box, but it’s not always easy to hold multiple identities together at once.

Back to Jerusalem. Since college, I had dreamed of an opportunity to study dance in Israel. Much like high tech, Israel is on the cutting edge of the contemporary dance world and is recognized as a world leader in the field. When I auditioned for and was accepted into the dance ensemble Merchav Mechol (Dance Space), I sat down with the very talented Miriam Engel, my future artistic director. I told her that I was shomeret Shabbat and asked if that would be a challenge. For the first time in my artistic life, I didn’t have to explain what being shomeret Shabbat was because being Israeli and Jewish, she obviously knew exactly what I meant.

Would performances be on Friday nights? In Jerusalem, it is not even an option to perform on Friday nights because the theaters typically aren’t open. Shows would be on Thursday nights or another day. Would we have extra rehearsals on the weekend? Extra rehearsals would be on motzei Shabbat or some other time. In that initial conversation, I experienced a freedom that I hadn’t previously felt in my artistic life when living in Chicago. Because in Israel there is a shared language, a shared calendar and a shared Jewish experience, my Jewish identity didn’t need to be explained, managed or juggled because that identity was already integrated into the society. I didn’t need to figure out how to merge my personal identity into my public life, because Jewish life sets the tone for the public space.

Gadi Taub, a modern Zionist thinker who teaches at Hebrew University, spoke at Makom’s Global Jewish Forum in 2013. During his speech, he said: “In order to truly be free, one must have a public dimension to one’s identity. Zionism reconciles private Jewish identity with public sovereignty and that the right to self-determination is an extension of the individual in the public sphere.”

Before living in Jerusalem, if someone had asked me if I felt totally free to be Jewish in America, I would have said, “Yes. Absolutely!” In America, and specifically in the Midwest, I felt free to express my Jewish identity. I didn’t have to hide, I didn’t experience much anti-Semitism, and my community was vibrant. But were all aspects of my life incorporated into the public space? That no matter who I wanted to be professionally, artistically, and personally, that I could do all those things and still be Jewish in the way I wanted to, in an integrated life? After living in Israel, I learned that when the public sphere is Jewish, it means that it is easier to fully integrate all the parts of who I am.  For me, modern Zionism creates the opportunity to freely and simultaneously integrate of all my values and identities — artistic, Jewish, and spiritual — to be Jewish in the way I want, in all aspects of my life.

Young Jews today don’t have first-hand memories of the Holocaust or of the founding of the State of Israel, and the majority don’t feel the need to flee from America because of anti-Semitism. However, one of the amazing opportunities that the modern Jewish state offers all Jews, is to live in or experience a public space where Jewish identity and values can be expressed, explored and determined in a public space and can integrate with all the other identities that we hold together in our modern lives.

Last year during class, Miriam showed us a movement combination. One of the opportunities a dancer has in technique class is to perform the movement and treat every class like an audition in order to enhance one’s performance skills. Before she turned on the music to start, she said: “Banot, tazuzu! Bitzua! Im lo achshav, ay-mattai? “Girls, move! Perform! If not now, when?”

About the Author
Leah Kahn is the Senior Jewish Educator at Berkeley Hillel. She lived in Jerusalem from 2011-2014. During her time there, she studied intensively at the Pardes Center for Jewish Educators in the Experiential Educators Program, and was a dancer in Merchav Mechol (Dance Space).
Related Topics
Related Posts
Comments