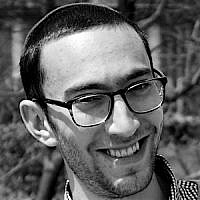 The Blogs
Ethan Stein
Apply for a Blog
Advertisement
Please note that the posts on The Blogs are contributed by third parties. The opinions, facts and any media content in them are presented solely by the authors, and neither The Times of Israel nor its partners assume any responsibility for them. Please contact us in case of abuse. In case of abuse,
Report this post.

Just about all Jewish organizations talk about engaging young Jews. In fact, since a 2013 Pew Research Report discovered that a growing number of young American Jews are completely unaffiliated, “engagement” has become somewhat of a buzzword among the Jewish establishment.

As a young Jew, I have been regularly on the receiving end of that engagement in the form of Jewish social events, holiday parties, or Israel trips. However, throughout my five years at Brandeis University—four years as an undergraduate, and a fifth graduate year—I learned that not all “engagement” is quite the same, and one organization far surpasses the rest.

Chabad on Campus is consistently impacting young Jewish lives across the world. Working on nearly every campus in the U.S., rabbis and rebbetzins are successfully attracting thousands of young people to their centers and educating them about their heritage. While my story definitely demonstrates this, a recent study performed by Brandeis Professor Mark Rosen and his co-authors has actually proven it. How they do it is all a matter of effective engagement, set to the tune of love, acceptance, and authenticity.

This question plagued me for the first three weeks of my return to Brandeis University in pursuit of my master’s degree in computer science, just over a year ago. I had completed my undergraduate studies several months before, only to return, without telling many, for a fifth year. Why did I return? Was it the opportunity to further my knowledge in an ever-growing field? The merit scholarship? There were many positive factors, but one surpassed all: the opportunity to spend a fifth year with Chanie and Rabbi Peretz Chein, the Chabad-Lubavitch emissaries at Brandeis.

Sixteen years ago, Peretz and Chanie came to Waltham, Massachusetts with a mission, a dream, and an empty bank account. Inspired by the teachings of the Lubavitcher Rebbe, Rabbi Menachem Mendel Schneerson, they planned to dedicate their lives to inspiring and igniting a flame in the hearts and souls of young Jews.

I had been attending Chabad events since I started attending university. As an observant Jew I visited them for prayer services, Shabbat dinners, and holiday events. But I was content with my minimal involvement and was not really looking to take it further. That is, until Saturday, June 28th 2014, when Peretz asked me to be president of the Brandeis Chabad House.

There is a drastic difference between knowing about every event, class, and function that goes on in an institution and knowing about what goes into planning, executing, and delivering that programming. From the moment I walked into the Chabad House my freshman year, I had been floored by the magic that took place at 54 Turner Street. But my devotion, respect and admiration for Chabad continued to grow each year of my experience. I realized that what Chabad on Campus had that other organizations didn’t was the knowledge that engagement is not only about programing, but relationships.

Once I became Chabad president, I thought that my relationship to Chanie and Peretz was stronger than that of other students. With every meeting, encounter, and call, my connection to them grew significantly — I even felt as if I was genetically part of their family. [On a recent visit to Brandeis, Peretz, publicly introduced me as his adopted son.] I knew wholeheartedly what we had was special, and I was humbled by that. But in truth, as this is what I saw and experienced, I didn’t need a recent 132-page Brandeis University report commissioned by the Hertog Foundation to prove that I am not an anomaly.

The study, which was based on qualitative research from 22 Chabad on Campus centers and the results of surveys from over 2,400 alumni under the age of 30, highlights the impactful results that Chabad on Campus emissaries are consistently having on young Jews. In all critical areas of life following college that the study measured, students who had participated at Chabad were more likely to take their Judaism into account. This included their likelihood to marry Jewish, celebrate Jewish holidays, participate in Jewish learning, support Jewish institutions, and many other areas. The study demonstrates that this is likely due to the authentic and enduring relationship that exists between each student and his or her rabbi and rebbetzin.

But it is not that students are affected by Chabad during their university years and then move on. In fact, many students continue to be in contact with their rabbis and rebbetzins long after they graduate. Whether it’s asking rabbis to officiate at their weddings or turning to their shluchim (emissaries) when in crisis for guidance and referral, the relationships created at a Chabad House continue long after graduation. At such a formidable time in students’ lives, the Chabad on Campus emissaries act as role models for these young adults. Instead of shunning clergy, these young Jewish people are showing an appreciation for a religious figure in their lives.

So it is for these reasons that students are flocking to Chabad Houses, where the focus is on the students today, not just on what they will do or who they will become in the future. The leadership of these emissaries, however, ultimately does impact the students’ Jewish futures, for they lead by example. The warmth and openness at Chabad creates a place where all are one. It is a place where students are challenged mentally and spiritually to reach new heights, and to live in that moment. Chabad lets us, wants us, and helps us feel unique, while being a part of something greater. They model a picturesque Jewish home and show the beauty of Torah and Mitzvot.

Looking back  on my fifth year at Brandeis, yes, I walked away with another degree, new knowledge and new friends. But I really graduated with so much more. I am elated that I was able to spend a fifth year with two spiritual giants who I am fortunate to call my teachers, my mentors, and my friends. I am proud to have been involved with the important work that Chabad is doing throughout the world and on college campuses specifically. I am thrilled that I was able to find a way to spend more time with Chanie and Peretz, because Chabad at Brandeis will always be my home-away-from-home, my community, and my family.

About the Author
Ethan Stein is the Business Development Manager for North America at MPP Global. MPP Global delivers the only fully integrated cloud platform to identify, engage and monetize digital audiences in the media & entertainment industries. He is an accomplished entrepreneur and problem solver with a focus on the technology space, and holds a BA/MA in Computer Science from Brandeis University.
Related Topics
Related Posts
Comments