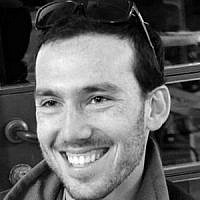 The Blogs
David A. Landau
Apply for a Blog
Advertisement
Please note that the posts on The Blogs are contributed by third parties. The opinions, facts and any media content in them are presented solely by the authors, and neither The Times of Israel nor its partners assume any responsibility for them. Please contact us in case of abuse. In case of abuse,
Report this post.

Over the last week, I can’t get the heroic images of King Hussein of Jordan out of my head. It was a day like any other in mid-March of 1997 when a Jordanian soldier opened fire on a group of Israeli school girls on a field trip, at a place ironically called the “Island of Peace” on the Jordanian border. The insane attacker took the lives of seven schoolgirls and wounded 5 others.

The soldier who opened fire had no regrets, maybe only that his gun jammed in the middle of his raged rampage and he didn’t succeed in taking the lives of the rest of the group. His mother, too, was quoted as being proud of her son’s actions and bringing pride to the Arab world. He was sentenced to 25 years in prison.

Just a few days after the massacre, King Hussein took action and did the unthinkable. He paid visits to the grieving families of the murdered girls, saying we are all “members of one family”, and visited the wounded in the hospitals. He placed politics, history, and all other petty interferences to the side and did not what was popular, but what was right. That is the mark of a true leader. Coincidence or not, Binyamin Netanyahu was the Prime Minister at the time and accompanied King Hussein in his visits.

Over the last week, we have seen the best and the worst of Israeli society brought out in the aftermath of the horrendous murders of Gil-ad, Naftali and Eyal. The best – support when times are difficult, the unwavering hope despite the odds, and a sense of communal togetherness that binds us. The worst – hateful words permeating the air and virtual media, violent protests calling for vengeance and spewing animosity, and the despicable murder of an Arab-Israeli boy that we now know to be by the hands of hate-driven vengeful Jews.

Israel needs to deal justly with Hamas, both in the West Bank and in Gaza, and the country is waiting to see what the leaders will do. News broadcasts are glued to cabinet meetings; who calls for settlement building, for a full-scale operation in Gaza, for retribution and for restraint. The Left and the Right are pulling each their own ways. To add fuel to the fire, Arab-Israelis are staging violent riots in Jerusalem, in the north and in the south. And here, amidst all this politically charged angst, this just might be an opportunity for true leadership on both sides, like that which we saw 17 years ago.

A game changer. Consider the following: Netanyahu, accompanied by Abu Mazen, visits the grieving family of Muhammad Abu Khdeir, after which Abu Mazen, accompanied by Netanyahu, visits the families of Gil-ad, Naftali and Eyal, each condemning the heinous murder of their respective sons, and expressing as did King Hussein, we are all “members of one family”. I know, what a radical idea! They would each be taking great risk in their respective political realms but, however unpopular they would become, they would be doing the right thing.

Both Netanyahu and Abu Mazen have condemned the murders; but as important as those statements are, and they are important, actions speak louder. And in the spirit of action, it wouldn’t hurt Netanyahu to crack down hard on Jewish terror – those who incite and act against Palestinian’s and their property; and Abu Mazen to sever his ties with Hamas and put an end to sponsoring hate-breading educational programs for Palestinian children and rewarding terrorists’ families for their “contributions”.

There is no proper way to murder, because murder is inhumane. However there is a proper way to console, to show empathy, because that is the essence of humanity, of what connects us on the most basic of levels.

I’m sure it won’t solve all our problems, but it will put us on the right path, on a path to the most basic of mutual understanding, that which comes before nationality, religion and history: that of human connection. It will show both sides of the spectrum that behind the facades of politics there is something more real, more authentic than declarations and demands of seasoned politicians. From that point, we can see one another first and foremost as humans, as people, and not as simply “the other”. It may be naïve, but it’s been done before, and our relationship with Jordan has not been all that bad, to say the least.

About the Author
Since making Aliyah from Los Angeles in 2007, David lived on a kibbutz near Sderot working in agriculture, served 3 years in the IDF and is currently pursuing a degree in Law and a Master’s in Philosophy at Bar Ilan University. He is a licensed Israeli tour guide, enjoys hiking, cooking, getting to know people from all walks of life and connecting them to the land he loves.
Related Topics
Related Posts
Comments