Israel is a tiny country with a massively disproportionate amount of blame, criticism and attacks, both verbal and actual; we tolerate and absorb a tremendous amount. We will NOT absorb this. As I write these words, the IDF is out in full force, and will leave no stone unturned to find three missing teenagers.

In case you are living under a rock, three Israeli boys were taken against their will. Kidnapped. Captured. Call it whatever you want. 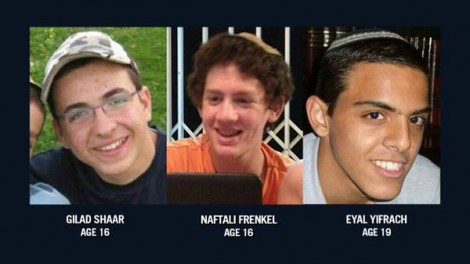 The three missing boys. Photos from images released by the IDF for the internet

Three families spent a nightmarish Shabbat in anguish, wondering where their sons are. The friends and classmates of three boys are terrified thinking about what hell their buddies are going through; the fear they must be experiencing. In fact, all of Israel is united, for a change, praying, hoping, worrying, offering to help in any way. Well, no, that’s not exactly true. Not ALL of Israel. Amongst the Arab population there is great celebration.

I hate lumping people together. Despite whatever terror has come from our Arab neighbors, I have always insisted, publicly and to my children, that it is the terrorists that are evil – not the ‘regular people’. And then this happened. And the ‘regular people’ have been passing out candy and celebrating at the kidnapping of teenagers. TEENAGERS! That could easily have been my child kidnapped. Or yours. While we are collectively holding our breath, and waiting for news – any news – of their safety and, G-d willing, their return, they are utterly delighting in this. 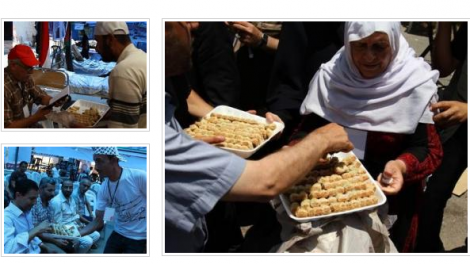 Screenshot from wattan.tv news from 6/14/14 of Arabs celebrating the kidnapping of 3 boys.

How do we possibly create any sort of peace with people like this? Where is their humanity? When negotiating for peace there are a few assumption there. A simple one is that the other party consists of human beings with the same basic values. People who value life. I’m beginning to wonder…

One thing I DO know: That this crazy country that I call home and Home seems to have it’s priorities straight right now. Listening to the news bulletins where EVERY point was about these boys. Where asking people to say tehillim (psalms) on national radio was absolutely natural. Where we have all taken to social media doing whatever we can do…perhaps nothing tangible, but sharing in our communal anguish, and joining together in our hopes and prayers for our boys.

Because frankly, what matters now is one thing: Naftali, Eyal and Gilad should be rescued, healthy, and returned to the loving embrace of their families. 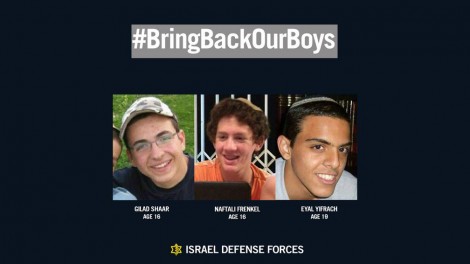 #BringBackOurBoys – Photo distributed by the IDF
About the Author
Laura Ben-David is a photographer, public speaker and Israel advocate. Inspired by her Aliyah experience, Laura began writing and never stopped. She is the author of the book, MOVING UP: An Aliyah Journal, a memoir of her move to Israel. She has spoken all over the world about Israel, Aliyah and other topics, often with beautiful photographic presentations. Formerly the head of social media at Nefesh B'Nefesh, Laura is the director of marketing at Shavei Israel as well as a marketing consultant.
Related Topics
Related Posts
Comments