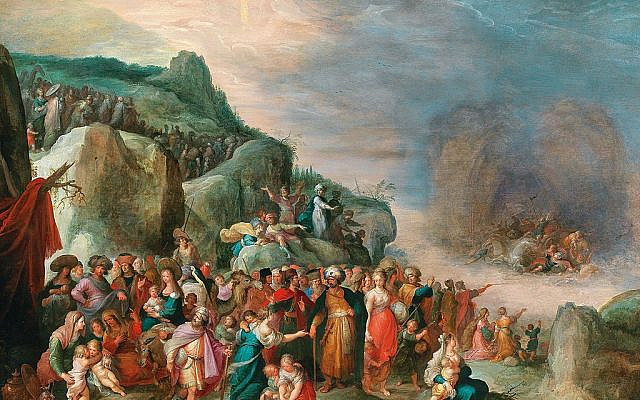 The Crossing of the Red Sea. Frans Francken the Younger and Ambrosius Francken II. 1642 (Wikipedia)

What body of water was split for the Isrealites to cross? Why include very specific locations and maneuvers when describing what is presumably a very simple set of events?

The unfortunate consequence of misinterpreting narratives is the loss of their depth and true value. Biblical narratives are not exempt. One such example is the colloquial misunderstanding of the miraculous nature of the splitting of the sea. The delicately contrived circumstances that enabled the event to occur are underappreciated in their nuance in favor of a simplified supernatural tale. In reality, the textual depiction of the splitting of the sea presents a tantalizingly plausible mechanism. Similar to how almost all of the plagues are coincidentally convenient natural phenomena for the region, the splitting of the sea is illustrated to the reader with enough detail to construct a phenomenologically natural etiology. However, it is the complexity of those intertwining elements combined with the logistics of the narrative that ultimately create a far more impressive expression of divine power.

The overly simplified common understanding of the closing scenes to the exodus begin with Israel trapped between the Red Sea and the Egyptian army. Moshe reassured the people of their impending salvation (Shmot 14:13-14). He stretched out his hands and a wind blew all night over the sea (14:21). The implication from the text is that this wind was the force through which the sea was split, however imagining a body of water dozens or hundreds of feet deep splitting using only wind is anything but plausible. This is the fundamental colloquial misconception; this is the miracle of ‘splitting the sea.’

The sea is referred in the text as yam suf (13:18), which is incorrectly translated as the Red Sea, the large body of water between Egypt and the Sinai peninsula. The yam suf is correctly translated as the ‘sea of reeds,’ similar to the suf, reeds, within which Moshe was placed as an infant on the bank of the Nile (refer to “Was Yocheved No Better a Mother than Hagar?”). The Egyptian reed, Cyperus papyrus, is a freshwater marsh plant that grows plentifully in the Nile river delta within the marshland and adjacent freshwater lakes. It grows in thick bunches in the millions appearing ‘sea like’ in their distribution, often growing in densities great enough to limit transit. Reeds prefer moist soil or to be submerged in shallow water. The Red Sea, being a salt water body, cannot support reeds. The actual marshes of the sea of reeds was bordered by deserts to the south and the east and was likely the margin along which travelers made a southern path into Egypt, termed the “Way of the Desert” (13:18).

This sea of reeds was once located in great abundance within the Nile delta which radiates out as it extends north towards the Mediterranean Sea. The entire story of the exodus takes place within the eastern most region of the delta located to the north of the Red Sea along the land between the historical land of Goshen, the location of Jewish slave habitation, and the Sinai peninsula. The marshland would deepen during the annual flooding of the Nile beginning around June. After the waters subsided the marshland would begin to shallow and dry during the harvest season, shemu, starting in March. This would have meant that during the Exodus, the marshlands were at their shallowest. Likely moist but not deep in water (refer to “The Remarkable Biblical Timetable of the Final Plagues”). Furthermore, the marshlands were deepest and most abundant closer to the Nile which flows south to north. This results in less concentrated marshland along the northern coast, which is likely why the dominant main highway of the time between Egypt and the Levant was located along the northern coast called the ‘Way of the Philistines’ (13:17). It connected Egypt to the rest of the fertile crescent towards the northeast as it travels along the coast into Philistine territories on the southwest of Canaan. The text is clear that the people were directed to avoid this route for fear of conflict (13:17).

The most impressive component of the miracle at the sea is not the splitting itself, rather it is manifest through the ingenious manipulation of events and personalities (refer to “Moses never actually said ‘Let My People Go'”). Only days following the final plague, Israel was directed to avoid the main route to the north, forcing them to travel southeast on the less common desert route that would bring them into the Sinai peninsula (13:18). Perched on the edge of the desert (13:20), at the limits of Egyptian control, Israel could taste their freedom. Yet instead of seizing victory the nation was instructed to retrace their steps back into Egyptian territory, closer to their captors (14:2).

Returning back to Egypt was precisely what Pharoah had expected. He had thought that Israel was only on a three day holiday and would return. The nascent nation, however, was under the impression they were escaping to freedom. Returning back towards Egypt likely reassured Pharoah that his slave nation was returning, but also made the Israelites doubt the wisdom of their leader and their confidence in his promise of freedom. As they began their return back towards Egypt God had them turn north in order to lure Pharoah into pursuit convinced that Israel was planning to escape but momentarily lost and confused (14:2-5).

Reversing course from the wilderness brought the nation back to the marshlands as they headed northwest. However, they did not go far enough north to travel along the more traversable coastal route, rather they were instructed to stop between migdol and the sea of reeds before pi hachirote (14:2) meaning the “gate of freedom.” This was likely the convergence between the northern coastal main road and the southern wilderness road as they combined on their way into Egypt. They were also instructed not to return too far north, coming to rest before reaching baal tzefon, roughly translated as the “Master of the North.” Encamping at this junction sent a very clear message to Pharoah. Had the nation intended to go to the desert for a three day holiday and then return to Egypt they would have simply continued on the road back to Egypt upon reaching this fork. Stopping at the fork suggested a plan for escape, presumably via the more common main route, the “Way of the Philistines.”

The scene was now set. The people were scared and doubted the plan and their leadership. Pharoah was enticed to pursue his slaves and return them by force. Israel had cornered themselves topographically, positioned centrally within the Nile delta. The Egyptian army was approaching from the west. Their fastest means of escape would be to travel along one of the main roads, north or south, however the Egyptian army would easily catch up to them. The sea of reeds to the east was impassable even this late in the flood season and this far north.

Astonishingly, God declared their salvation would be via the sea of reeds, through which they would travel on dry land (14:15) flanked on either side by walls of the impassable waters (14:21), protecting them from attack should the Egyptian army attempt to maneuver around and attack from the side. It was late in the harvest season. The marshes were receding and Israel was located near the northern edge of the Nile delta where the swamp was at its shallowest. Should this marshland be exposed to a sustained mono-directional current of dry air from the desert to displace and evaporate the remaining moisture, then the soil would transition from impeding mud to being conducive for transit. Seeing the nation escaping through this convenient escape route enticed the Egyptians to pursue. Once the nation was across having returned to the edge of the desert, the wind subsided. The displaced shallow water quickly returned to the thirsty porous soil and its viscid consistency. Suddenly surrounded on all sides within this impassable and dangerous terrain, laden in armor with weapons and chariots, the Egyptian army was defeated.