Warning: [If you care about the anglo arts community in and or around Jerusalem or Israel, this article may upset you. Also it is long.]

After a year of attempts on my part to get press coverage from the Times of Israel for community theater performances here in Jerusalem, I finally received a letter from Culture Editor, Jessica Steinberg, that I had been expecting all along. It is official Times of Israel Policy, to not write articles discussing, talking about, promoting or reviewing, community theater in Jerusalem or Israel.

This isn’t simply a matter of a lack of resources, as I offered to find a writer who would write an article for free, so that Ms. Steinberg wouldn’t have to trouble herself or any of her writers, all of whom I’m sure, have very busy schedules. It is rather a conscious decision to not cover community theater in Jerusalem, or in Israel, and I take issue with it.

After almost a year of blowing me off, coming up with excuses as to why Ms. Steinberg, and the other writers who have covered arts at TOI were ‘unavailable’ to cover any of the performances that I had been producing, she finally fessed up and told me the truth. Community theater simply isn’t worth her time and apparently is of little or no interest to TOI readers simply because it is not ‘professional’, and because there is ‘too much of it’ to cover.

In the words of Ms. Steinberg: 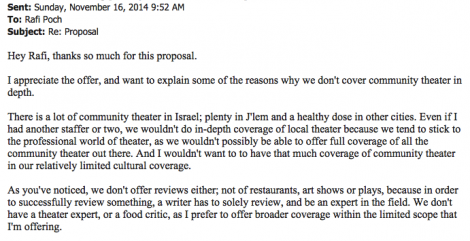 It always boggled my mind, how such a vibrant community that has a performance in English in Jerusalem almost every week of the calendar year (save for the holidays and three weeks of mourning over the summer months leading up to Tisha B’av) gets zero press coverage from one of Israel’s leading English newspapers. Ha’aretz and the Jerusalem Post by comparison, cover quite a lot of the shows that get put on, and often do in depth articles about the theater companies themselves, in addition to reviews and articles about shows. One was even published yesterday.

Now this is not to say that Times of Israel does not cover theater. Or does not think that theater is important. On the contrary, as Ms. Steinberg points out, it is due to the community aspect of the shows that these performances are not covered. “We tend to stick to the professional world of theater”.

As a matter of fact, TOI often covers theater that is taking place in other countries, especially if it has something to do with Judaism. For example: A wonderful article covering a hit play, Division Avenue that performed in New York and Dallas was written and published in July of last year. However, when the same play came to Jerusalem, just over six months after its New York debut, the story was no longer of interest to Ms. Steinberg. Not even as a follow up article. Ms Steinberg simply wrote in response to a request that she might be interested to do an article on the story, but then never did:

That statement in the past year has proven to be false, as out of the 17 full length theatrical performances that graced the stages of this city since December 2013, only one was covered by TOI, and that one, (Midsummer Night’s Dream– Theater in the Rough) was produced by Ms Steinberg’s sister Beth.

So is community theater in Jerusalem and Israel in general a ‘non-issue’? Something to be overlooked by the press, in favour of the more rare Jewishly oriented ‘professional’ theater that takes place in Israel or abroad? Let us look at some numbers.

Jerusalem is home to a vibrant community theater consisting of six english speaking community theater groups in the city including; Encore!, Israel Musicals, Beit Hillel, Theater in The Rough, Starcatcher, J-Town Playhouse, and up until last month JEST.  There are numerous others throughout the country including; LOGON, Raise Your Spirits, Desert Rose, The Stage, The Guild, Haifa English Theater, Sharon Players, Old Barn Players, English on Stage and a smattering of others.

There are over 400 community actors in Jerusalem alone. Many of whom perform for more than one of the various theater troupes each year. There were 17 full length productions performed in English since last December, and numerous other smaller shows such as music concerts, cabaret evenings, improv shows, etc…

There are a myriad of directors, producers, stage managers, backstage hands, make-up artists, set designers, painters, builders, box office staff, and other volunteer who help make community theater run, and all of this is done out of love, as almost all of the participants do it gratis. Some even pay for the experience depending upon which group they act with. As for audiences, since December last year, approximately 13,640 (low estimate) people have attended community theater shows in Jerusalem.

Israelis and anglos alike, from Tel Aviv and even as far away as Haifa, spend thousands of shekels of their own money commuting to Jerusalem to take part in the community theater productions, on a regular basis. Many of these avid aficionados, have professional training and some even work or teach professionally in schools such as Beit Tzvi, Seminar HaKibbutzim, Nissan Nativ and other acting schools. Some even act in the Cameri, and still come to participate in the Jerusalem community theater scene. Hence, the lines are often blurred between community and professional.

I cannot tell you how many people from Tel Aviv, who are ‘professional’ actors, have told me that they are terribly jealous of the community theater scene here in Jerusalem, and wish one just like it existed in Tel Aviv.

However all of this, is of no interest to Ms. Steinberg, and doesn’t even garner a mention on the pages of TOI. The only times that community theater has even been mentioned in TOI  in the last year has been in blogs that community members, or participants of the shows have written. Oh yeah, and in the one above mentioned token article, about which, I will let you draw your own conclusions.

It seems that the official writers and editors of the cultural section of TOI snub this ever expanding community time and again, with false promises that they may come and write, but no actualization, and no coverage. After receiving the letter from Ms. Steinberg, I am lead to believe that this is deliberate.

The numbers do not tell the whole story though. They simply show the interest of the community, and that the stories are certainly newsworthy.

But community theater has never been about the numbers. It is about heart. The heart that a nine year old girl has in learning about and portraying a character from the holocaust, even learning German to do the part correctly. The heart that audiences have in coming out to see a show amid air raid sirens and missiles falling on Jerusalem. The heart that directors and choreographers have staying up all night to finish a scene, or set painters pulling a ‘white night’ to make sure that the scenery is perfect for opening night. The heart and sacrifice that hundreds of people show everyday, coming out to rehearsals after putting in a full day at the office, just so they can make people smile at the end of a three or four month rehearsal period when the curtain finally goes up.

It is about passion. Passion is the real story behind community theater. And that is the part that Ms. Steinberg seems to miss. The passion that the community has to create something beautiful. Whether it is the same old show that has been performed every five years over the past three decades, or a newly written piece, the passion which goes into the project is the real story. And this passion is often more prevalent in community theater than it is in the professional one where acting has become a job.

The passion within the community, to do something other than worry about politics, or the security situation, that the media always touts. The passion to make people laugh, and to feel good. The passion to create youth projects where the youth themselves can take charge of one aspect or more of a show, and feel like they belong. That passion. That is what lies at the true heart of community theater.

It is about togetherness. The creation of a group mind. To know that when a group of people come together, anything is possible. Any emotion is attainable, and any moment in time or place can be recreated. That is what community theater is all about. The creation of a community!

But all of this apparently is of no interest to TOI or to Ms. Steinberg. Apparently, passion, community, creation, and art, if it is not ‘professional’, carry no weight, and have no place on the pages of the Times of Israel.

For this then must be a newspaper which cares not for the community, or the city from which it stems, and where it houses its main offices. Rather it cares only for the ‘professional’. And only those pieces will receive coverage.

Well I for one cry shame. Shame on you for not giving a voice to that for which you were created, to cover culture, art, passion, heart, and community. Shame on you for failing to write about ‘the little guy’, and telling one of the truly amazing stories that Jerusalem and Israel have to offer.

We face enough enemies and challenges all around us on a daily basis. The theater is the place where some of us can come to forget those challenges and to create something new, something beautiful. As of now, I for one, will think of the TOI cultural editorial staff as a challenge to be forgotten whenever I put on a play. As the Pulitzer Prize winning playwright and composer Jonathan Larson wrote into one of his songs in the hit musical Rent, ‘The opposite of war isn’t peace, it’s creation.”

Ms. Steinberg, every time I produce a play, I will not make peace with your scathing critique claiming that community theater is of little or no importance. I will simply create more of it. And I know that I will not be alone in that endeavor. I will continue to do so, until you and every other naysayer out there who claims; ‘that there is only importance in a show if it is ‘professional’’ realize, that community theater is something so special, so wonderful, that you simply cannot ignore it any longer.