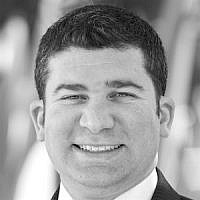 The Blogs
David Reinwald
Apply for a Blog
Please note that the posts on The Blogs are contributed by third parties. The opinions, facts and any media content in them are presented solely by the authors, and neither The Times of Israel nor its partners assume any responsibility for them. Please contact us in case of abuse. In case of abuse,
Report this post.

The creation of art and music during the Holocaust is an important piece of Holocaust history and a testament to a culture unwilling to be silenced. While countless victims of the Holocaust struggled to hang on to any semblance of their own humanity while imprisoned in the ghettos and camps, there were artists who managed to continue to make their voices heard through their art. It is imperative that we continue to honor these voices and carry them with us into the future — for the continuation of their legacy is our responsibility.

I have personally spent a lot of time with this music and each piece conjures up many feelings and memories. I am often reminded of a powerful moment when I first visited the U.S. Holocaust Memorial Museum in Washington, D.C. Walking through the main exhibit, I came upon a manuscript of a musical composition written by Viktor Ullmann (1898-1944), best known for his opera Der Kaiser von Atlantis. This one-act opera, which he collaborated on with the artist and poet Peter Kien as its lyricist, was rehearsed in the Terezín ghetto in Czechoslovakia in 1943, but was not performed until 1975, as the Nazis correctly interpreted this work as an act of rebellion. Der Kaiser von Atlantis is a dystopian and existential vision of a world that accurately reflected life under Nazi oppression. Ullmann made a strong impact with his compositions then and now. He and Kien both died in Auschwitz in October, 1944.

Displayed merely steps away from the opera’s manuscript at the museum is the infamous cattle car. Having these two artifacts side-by-side proved them to be silent witnesses that the horrors of physical captivity could not imprison the mind. The Nazis failed to destroy the last glimmer of hope, to banish the last creative thought, or silence the last outspoken cry of dissent.

While musical output during the Holocaust encompassed multiple styles and genres as well as a wide range of countries represented and languages spoken, there are universal lessons that emerge from the existence of so much art created within this abyss.

Hope does not easily die

Musicians, composers, and performers who had artistic careers prior to the war held on to their passions even during the Holocaust. Conditions in the Terezín ghetto and the Dutch transport camp of Westerbork (where in an ironic twist, the camp commandant was a fan of pre-war cabaret) enabled these artists the opportunity to continue to have a musical voice and sometimes even pursue new musical visions. For even when it was bleak, hope was still there. Max Garcia, a cabaret artist and prisoner of Auschwitz, was quoted saying: “the resistance was there, the resistance was among the prisoners. The resistance was not just in the music, it was not in the joking, it was not just in anything else we did. It was in the refusal. It was in the refusal of becoming inhuman and to refuse them the chance of totally dehumanizing us, those who were still at that time surviving.”

Throughout the ages, lyrics of songs have been rewritten to reflect the time and place of each individual singer. This happened with songs of all styles — lullabies, folk songs, and popular melodies from operettas. The repurposing of these songs, known as contrafacta, allowed for anyone to become a musical poet. Meanwhile, seasoned performers and composers found themselves continuing to pursue the musical styles they had championed. Yiddish playwrights and songwriters wrote new, contemporary pieces in the Vilna ghetto. Jazz ensembles like the Ghetto Swingers led by Martin Roman (1910-1996) in Terezín wrote ingenious catchy arrangements for the most popular cabaret performers of the day like Kurt Gerron (1897-1944). Viktor Ullmann continued to further the style of the Second Viennese School as a former prodigy and student of Arnold Schoenberg.

In Terezín, prisoners found moments of ecstatic emotion and short-lived oases of peace through the gathering of a choir singing the Verdi Requiem, despite the ominous foretelling of the requiem as a memorial prayer. Young prisoners found moments of pleasure performing the modern children’s opera Brundibár by Hans Krása (1899-1944). It was sung with joyous melody, despite its allegorical story of a heartless thief who steals from children trying to help their ill mother.

If we make the valiant effort to keep this music alive, we can promise to never silence a generation that fought to make their voices heard. They have left their legacy to us in their art. Their music made an impact on listeners then and should continue to be heard today. Frieda Rosenthal, an appreciative audience member of cabaret music in the Terezín ghetto, commented at the time: “They sing their song … and our hearts join in. It’ll be that way again. The agony of our longing disappears, thanks to our dear cabaret.”

About the Author
Cantor David Reinwald is the cantor of Temple Beth Sholom in Santa Ana, CA, and a member of the American Conference of Cantors. His research on cabaret music composed and performed during the Holocaust is archived at the U.S. Holocaust Memorial Museum and at Yad Vashem. He is also the host and producer of the podcast Tropeful, studying Torah through trope cantillation.
Related Topics
Related Posts
Comments