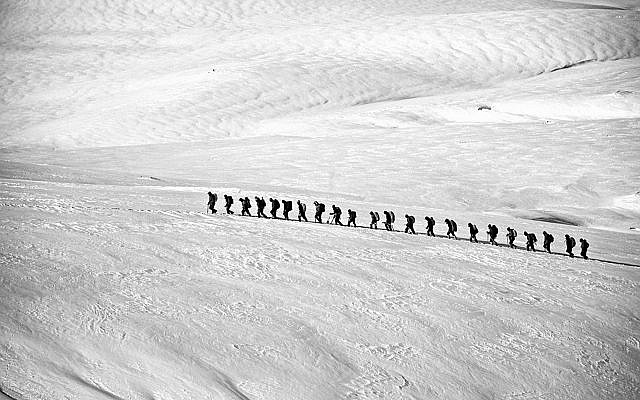 With the recent spike in antisemitism, we can be forgiven for wondering about our People’s survival amongst hostile nations and our fellow citizens. But the Torah gives us a powerful assurance that our People will overcome all odds and ultimately land on their feet no matter the intensity of animosity issuing from our adversaries.

As our forefather Jacob prepares to face his arch-nemesis Esau, he spends the night wrestling with a mysterious stranger whom the Midrash identifies as Esau’s angel. When he was unable to kill Jacob, the angel left at dawn, but only after he dislocated Jacob’s hip, causing him to limp. As he leaves, the angel actually blesses Jacob for his perseverance and changes his name from Jacob—meaning “heel” or “follower”—to Israel—meaning “leader” or “prince”—“for you have struggled with men and angels and you have prevailed over them both.”

As a result, the Torah bans the consumption of the sciatic nerve, which was touched by Jacob’s adversary, declaring it unkosher. Ever since, it’s nearly impossible to find a kosher rump or T-bone steak, all because of this enigmatic all-night encounter of our patriarch Jacob.

It seems surprising that this particular Biblical encounter should have such a respectable place in our culinary customs, unlike any other Torah episode. Our sages explain that this story actually represents much more than meets the eye:

Jacob’s struggle with the angel represents the Jews’ eternal struggle for legitimacy amongst the nations of the world. The all-night struggle foretells the long duration of our exile, in which we will not be able to win over our enemies, but neither will we succumb to them. In fact, we will endure to the very end of time and ultimately emerge victorious over all our enemies. Like Jacob, we will be bruised but not broken; battered but not beaten. Avoiding the sciatic nerve thus serves as an inspirational and timeless reminder of our nation’s promise of survival!

But there’s more to the meditation: It would have been enough—dayeinu—had the Torah just prohibited the thigh region from kosher catering. We would have internalized the prophecy of our nation’s endurance. The directive to ban just the sciatic nerve, the largest nerve in the human body, which spreads like a spider’s web through the thigh, reminds us that G-d’s promise for our survival applies not only to the nation in general but to each and every intimate detail of the struggles we face as well!

Notwithstanding the greatness of G-d and the pettiness of my personal struggles, G-d’s attention, and care extend to each and every fiber of my fears, just as the sciatic nerve snakes its way deep into the recesses of our hind quarters.

Hence the Talmud (Chullin 7b) states explicitly that “a person doesn’t stub his toe on this Earth unless it was so decreed in Heaven.” Every single thing that happens to us is for a reason. We are never alone in our struggles, as the famous Psalm (23:4) states: “Though I walk through the valley of death I fear no evil for you are with me.” What is supposed to happen to us, will happen and what is not meant to be, won’t.

Think of life as a magnificent symphony with thousands of musicians. An ordinary person might find some of the performers unnecessary or even annoying—their clamoring or trumpeting sounds more like a noise than music. But the trained ear understands the vital role that each one serves in producing the majesty of the final product!

Less than a century ago the world revered a great symphony conductor, an Italian maestro named Arturo Toscanini (1867 – 1957), who led concerts all over the world. He was known as an absolute perfectionist and had few peers. Toscanini had a biographer who would interview him periodically over the years as a part of a major book he was writing.

One evening he called Toscanini and told him that he would be in town the next night and asked if he could come to the house to interview him. Toscanini answered that he could not because he would be doing something special that would require absolute concentration; he could not be interrupted. “Maestro,” the biographer said, “what are you doing that’s so special?”

“There is a concert being played overseas. I used to be the conductor of that symphony orchestra, but I could not be there this year. So I’m going to listen to shortwave radio and hear how the other conductor leads the orchestra. I don’t want any interruptions whatsoever.”

“Maestro, it would be my greatest pleasure to watch how you listen to a concert played by an orchestra that you used to lead. I promise I won’t say anything. I’ll sit on the other side of the room, quietly.”

“If you promise to be perfectly quiet, you can come,” Toscanini said.

The next night, the biographer came and sat quietly while Toscanini listened to the concert, which lasted almost an hour. When it ended, the biographer remarked, “Wow, wasn’t that magnificent?”

“They were supposed to be 120 musicians, including 15 violinists. Only 14 of them played.”

The biographer thought he was joking. How could he know from six thousand miles away, over shortwave radio, that one of the violinists was missing? The biographer had his doubts but didn’t want to say anything and went home. The next morning, he called the concert hall overseas, asked for the music director, and inquired as to how many musicians were supposed to have been playing the night before versus how many had actually shown up. The concert hall director told him that there were supposed to be 120 musicians, including 15 violinists, but only 14 had shown up!

The biographer was amazed. He returned to Toscanini and said, “Sir, I owe you an apology. I thought you were just making it up the other night. But please, tell me, how could you know that one violinist was missing?”

“There is a great difference between you and me,” Toscanini answered. “To the audience, everything sounds wonderful. But I’m the conductor, and the conductor has to know every note of music that has to be played. When I realized that certain notes were not being played, I knew without a doubt that one of the violinists was missing.”

Every one of us has been given the gift of playing a part in the symphony of life. Each day in our lives, indeed each relationship, encounter, experience, and interaction serve a vital role that is most likely beyond our ability to grasp. It may seem insignificant to some, but the Conductor is intensely attentive to every note we hit correctly as well as every mistake that mars the beauty of the entire performance. Each of us is indispensable to the “Conductor” and Creator of the universe.

As we ruminate on our steaks this week, let’s meditate on the profoundly heart-warming awareness that every single detail in our lives is by Divine design, like the web of nerves spreading through our flesh.

Don’t curse your mazal. Don’t kill time. Experience every moment as you live it to the fullest, knowing that G-d is in full control. Everything will be good in the end; if it’s not good, it’s not the end!

About the Author
Raised in South Africa and educated in some of the finest Yeshivas in Israel, England, New York, and Australia, Rabbi Dovid Vigler strives to share the beauty and depth of Judaism in a clear, conversational, and down-to-earth manner. Whether in private counseling, relatable sermons, weekly email broadcasts, or in his popular Torah classes on social media, he reaches out to every Jew with unconditional love, patience, and compassion. His inspirational talks and uplifting messages can be found on YouTube.com/JewishGardens and Facebook.com/JewishGardens
Related Topics
Related Posts
Dovid Vigler