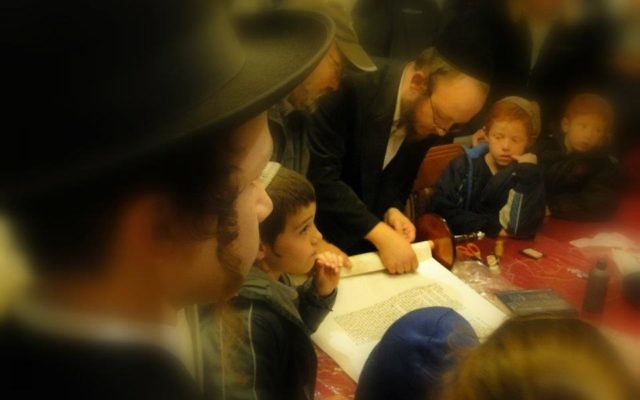 Many different kippahs and hats around the Torah

What’s in a kippah? Apparently a lot more than you would think. After the firestorm that’s been triggered by Rabbi Shalom Cohen in a recent video where he suggested that knit-kippah wearing national-religious Jews are not Jews, it seems the kippah battles have begun. A kippah, the common head covering for observant Jewish males – even seen occasionally on females – is one of the common denominators of the religious Jew. Although what each kippah has in common with the other is, well, almost nothing. The shape and size can vary from a tiny, flat disc to a huge, salad bowl-sized dome. This size variance seems to be of huge importance, particularly to the salad-bowl-sized wearing variety, the indication being the larger the size, the more religious/strict/particular the wearer must be. Or, the bigger the bald spot hiding beneath.

Much more important than size is the material the kippah is made of. After all, what better way to show your allegiance to G-d, than by wearing a kipah made of velvet? I mean of suede? Oops, I really meant of crocheted string.

Obviously these silly distinctions have no bearing on me. I have proudly taught my sons that they should wear the kippah that they like best – that day. And if the next day finds them in the mood for a huge, straight-sided, embroidered Bucharian kippah, so be it. Or if my girls have anything to say on a given day, the boys inevitably have on flat, crocheted discs, or neat, colored suede ones, carefully clipped to their hair.

It was thus to my complete astonishment that I experienced a particular phone call, a number of years ago. In a frantic attempt to find my son a high school, after the one we had planned for fell through, I got the number for a recommended place and called. I introduced myself, told them we live in Neve Daniel and was interested in their school for our son. The principal right away tried to explain to us that this may not be the school for us, and I was baffled as to, A.) Why he would even say this and B.) How could he possibly know anything about my son when all I had done was introduce myself?

Realizing that I wasn’t getting what he was getting at, he presented me with the bottom line: what kind of kippah does your son wear? After all, apparently if anything is telling about someone, it is certainly their kippah. Ah, but he does not know my son. What kind of kippah would you like him to wear? I innocently asked. He is flexible and would wear any kippah you like.

The man was beginning to get exasperated with me. I couldn’t understand why. I finally realized that I had actually called the wrong school. Then it hit me that, so what that I called the wrong school? Why can’t my son who lives in Neve Daniel stick on a big, black kippah, or whatever kind of kippah this school espoused, and be accepted like anyone else?

I hung up the phone feeling unjustly accused of, of what? I didn’t know. Of living in the wrong neighborhood? Of mixing with the wrong people? Of selecting the wrong way of life? No, that wasn’t it at all. I thought about it some more and realized that there was nothing more to it than that we wear the wrong kippahs – and everything that the wearing of wrong kippahs implies.

Upon further thought, I suppose it wasn’t unjust at all. I am guilty as charged. Guilty and proud. Proud that I feel no need to place myself or my family in a Jewish box, neither a ‘right’ box nor a ‘left’ box. Proud that while I am unshakably devoted to my religion, I encourage my children to find their Jewish comfort zone. And their comfortable kippah. After all, if the kippah fits, wear it.

About the Author
Laura Ben-David is a photographer, public speaker and Israel advocate. Inspired by her Aliyah experience, Laura began writing and never stopped. She is the author of the book, MOVING UP: An Aliyah Journal, a memoir of her move to Israel. She has spoken all over the world about Israel, Aliyah and other topics, often with beautiful photographic presentations. Formerly the head of social media at Nefesh B'Nefesh, Laura is the director of marketing at Shavei Israel as well as a marketing consultant.
Comments