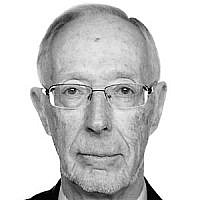 The Blogs
Terry O. Trowbridge
Apply for a Blog
Please note that the posts on The Blogs are contributed by third parties. The opinions, facts and any media content in them are presented solely by the authors, and neither The Times of Israel nor its partners assume any responsibility for them. Please contact us in case of abuse. In case of abuse,
Report this post.

(What is the missing element in our war against terror?)

In a world of increasing religious-based conflict, terror and personal tragedy we wonder how to stop it.  We wonder why it continues to increase even though we respond to this violence by defending our cities, by attacking the perpetrators, by killing or arresting them, by increasing our defense budgets, by deporting them when we find them, and so forth.

All of us have an obligation to find the answer to this dilemma — in all of our countries — because it affects all of us.

To do this we must go beyond tolerance.  We must use the terrorists’ tactics and be better at it than they are. Their basic tactic is education.  We must combat that by educating our people — our children — the opposite of how they are being educated by them.  Not emphasizing hate.  Not emphasizing religious differences as is often done in their homes, their schools, their media.  Not emphasizing violence — or violence in response to violence — to solve problems.

For too long they have had the advantage in education.  We must take that advantage away from them.  For too long we have attacked only the effects of this violence.  We must begin to seriously attack the causes as well.  And, the basic cause is their use of education to further their goals.  The future welfare and even the existence of civilization is dependent on the educational system.  Which system will prevail, their’s or our’s?

This education begins when the child is born, in kindergarten, then in school and in the universities, through our media and governments.  Yes, all have an important part to play.  This education must be at every level of our lives — beginning in our country and flowing to all lands through, what can be called, passive hegemony.

We can see how passive hegemony has worked by, for example, the “no smoking” laws and rules which originated in the USA several decades ago and have since flowed to many other countries — “passive” because this was not the result of any direct action of the USA that caused the flow to other countries. It flowed because people and governments decided it was a good idea once they understood it.

We, at every level, must teach to stop overemphasizing religious or other differences from which violence can ensue.  We must teach to always search for and emphasize those common threads of similarity that all religions have — though not in any way to diminish the importance of their differences.  We must teach that conflict and violence does not give the solution to religious differences.  We must teach that finding and emphasizing common threads of similarity reduces the emphasis on differences and therefore will, over the longer term, reduce such conflict and violence.  It will not stop it but it can begin to be controlled and managed so it will not to be the threat it is today.

This is an active, not a passive or altruistic, approach to combat the world’s current state of terror and violence.  It requires all of our efforts and is generational and long-term.  Without it we will continue to be mired in our contemporary and future conflicts, spending massive amounts of money, energy and blood of our young without the resultant success we search for.

Granted this is a long term activity.  But, clearly our current approach is not reducing this conflict though we have been pursuing it now for decades; in fact, according to all reports, the violence has been increasing.  Likewise, this current approach is not protecting our personal, group or national security which continues to deteriorate.  Has anyone a better answer?

Terry O. Trowbridge is an international lawyer and currently serves as Director of the Center for Reduction of Religious-Based Conflict an independent NGO headquartered in the USA.  His is the author of Beyond Tolerance and can be contacted at centerrel@center2000.org.

About the Author
Terry O. Trowbridge is an international lawyer and currently serves as Director of the Center for Reduction of Religious-Based Conflict an independent NGO headquartered in Naples, Florida. His is the author of Beyond Tolerance and can be contacted at centerrel@center2000.org.
Comments
Advertisement