It took a while, but eventually, at least some of the media have noticed the unfortunate fact that the organizers of the widely promoted Women’s Strike on March 8th include a female Palestinian terrorist convicted of murdering two young Israelis in February 1969. As the niece of one of the victims rightly noted, it’s fair to assume that Rasmea Odeh had hoped to kill even more people with the bombs she planted in a Jerusalem supermarket; incidentally, Odeh was also convicted of an attempt to bomb the British Consulate.

This story sounds apparently so much like “fake news” that the popular fact-checking site Snopes decided to take it up. Unfortunately, however, the Snopes post reads as if its author was also hoping that the story could be dismissed as “fake news.” As Professor William Jacobson noted on his blog, Snopes quotes extensively from an article by an anti-Israel activist “exonerating Rasmea [Odeh] based on demonstrably false assertions.”

Indeed, it seems that Odeh’s prominent role among the organizers of the Women’s Strike is one of the issues that most of the mainstream media still prefer to ignore – even though (or, more likely, precisely because) it tells us a lot about some of the problematic aspects of the “resistance” that has been forming against the Trump administration. But if you are serious about opposing Trump, you should be serious about understanding what feeds the rage against the “elites” that seems to motivate so many Trump supporters. The fact that Odeh was warmly embraced as a co-organizer of the Women’s Strike is an excellent example for how the “elites” are actually doing quite a bit to deserve the suspicion and despise of the “deplorables” who support Trump. It is arguably also an excellent example of the “progressive” anti-Semitism that has been promoted for many years under the cover of anti-Israel activism. 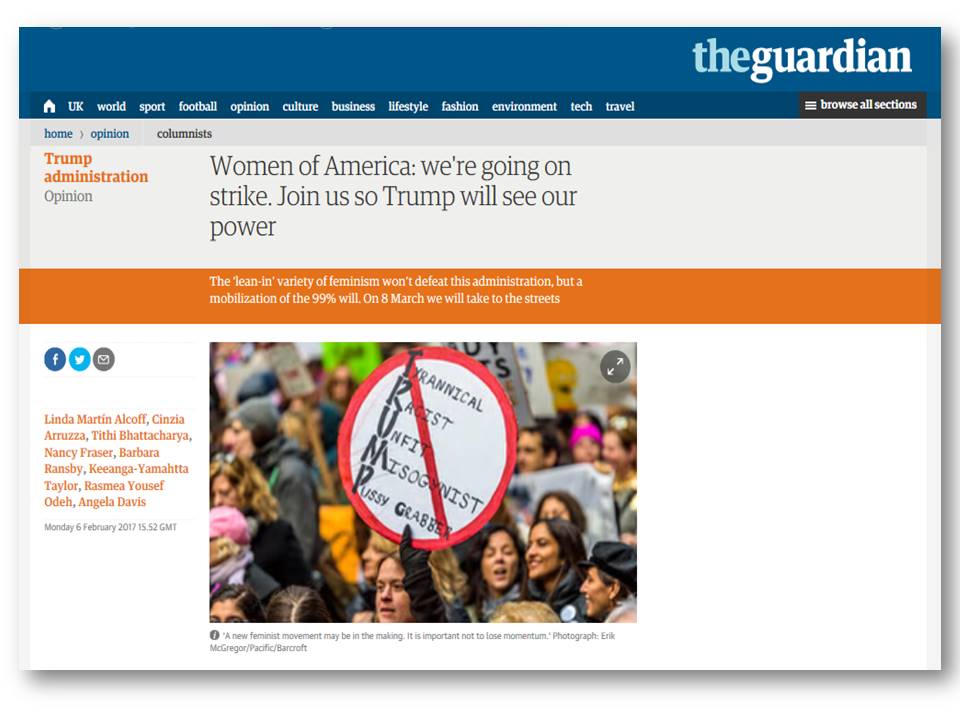 One of the first widely shared calls for the Women’s Strike was published in early February in The Guardian. It was co-authored by eight women, one of them Rasmea Odeh. Her Guardian profile [archived here] describes her as “the associate director of the Arab American Action Network, leader of that group’s Arab Women’s Committee and a former member of the Popular Front for the Liberation of Palestine [PFLP].” The fact that the profile mentions her “former” membership in the PFLP is noteworthy, since it obviously means that Odeh does not deny her association with the group, which is listed as a terrorist organization by the US, Canada, Australia, and the European Union. Together with the overwhelming evidence that her conviction for the 1969 bomb attack was indeed justified, this should disqualify Odeh not only from acquiring American citizenship (as she has by concealing her terrorist past), but also from being feted as a fellow feminist and progressive by US academics.

Yet, here are the Guardian profiles of Odeh’s co-authors:

“Linda Martín Alcoff is a professor of philosophy at Hunter College and the Cuny Graduate Center and the author of Visible Identities: Race, Gender, and the Self.”

“Cinzia Arruzza is an Assistant Professor of Philosophy at the New School for Social Research in New York and a feminist and socialist activist. She is the author of the author of Dangerous Liaisons: The Marriages and Divorces of Marxism and Feminism.”

“Tithi Bhattacharya teaches history at Purdue University. Her first book, The Sentinels of Culture: Class, Education, and the Colonial Intellectual in Bengal (Oxford, 2005), is about the obsession with culture and education in the middle class.”

“Nancy Fraser is professor of philosophy and politics at the New School for Social Research in New York. An Einstein fellow at the John F Kennedy Institute of the Free University of Berlin, she also holds the chair in global justice at the Collège d’Etudes Mondiales, Paris. … Her most recent book is Fortunes of Feminism: From State-Managed Capitalism to Neoliberal Crisis (Verso, 2013).”

“Barbara Ransby is an historian, writer and longtime activist. She is a Distinguished Professor of African American Studies, Gender and Women’s Studies, and History at the University of Illinois at Chicago.”

“Keeanga-Yamahtta Taylor is assistant professor in the department of African American studies at Princeton and author of From #BlackLivesMatter to Black Liberation.”

“Angela Davis is a political activist, writer and scholar. She is distinguished professor emerita at the University of California, Santa Cruz, and founder of Critical Resistance, a grassroots organisation that campaigns to end imprisonment as a solution to social problems. She is the author of Are Prisons Obsolete? (2003) and Abolition Democracy (2005); her autobiography was first published in 1974.”

These academics apparently felt that their cause was well-served by associating with a “former” member of a Palestinian terrorist organization that “is well known for pioneering armed aircraft hijackings in the late 1960s and early 70s” – i.e. just the time when Rasmea Odeh was a PFLP member. Did anyone ask her when and why exactly she stopped considering herself a member of the terror group? And were none of these academics – who surely all support advocacy for refugees and immigrants – bothered by the fact that Odeh acquired US citizenship by concealing her terrorist affiliation as well as her conviction for participating in one “successful” and one failed bomb attack? Did none of these academics bother to use Google in order to find out if Odeh’s claims of having been falsely convicted were trustworthy? Extensive documentation showing that Odeh’s claims have no merit whatsoever has been available since November 2014 at Legal Insurrection.

But I’m afraid these questions are sadly irrelevant: for years, being a “progressive” academic has meant embracing anti-Israel activism, even though – or maybe precisely because – this activism targets the world’s only Jewish state and campaigns for its elimination. This is of course a goal Odeh’s PFLP fully shared, and prominent anti-Israel activists who support Odeh – like e.g. Ali Abunimah – can be sure that their fervent admiration for an Islamist terrorist organizations like Hamas will not raise too many “progressive” eyebrows. Similarly, US academics who accept an “award” from an Islamist website with ties to Hamas need not worry about any damage to their career or reputation.

Odeh’s “progressive” academic friends may be inclined to regard her affiliation with a terror organization and the terrorist attacks for which she was convicted as justified “resistance,” or, in the case of Marc Lamont Hill, Distinguished Professor of Africana Studies at Morehouse College, as something that can be breezily subsumed under the euphemism of “four decades of community organizing experience.” For “progressives,” there is no need to doubt Odeh’s claims that her confession was extracted under the most heinous torture – as Linda Sarsour, another supporter of Odeh who has recently also become a prominent feminist icon, once put it: “Nothing is creepier than Zionism.” Just as in the Middle Ages no accusation against Jews was too heinous to be widely believed, nowadays no accusation against the ‘creepy’ Zionist state will seem suspect to “progressives.”

For the Trump administration, it is arguably good news that some of its most vocal opponents are freely associating themselves with a convicted terrorist murderer who illegally acquired US citizenship. And for those of us who fight anti-Semitism, it is just another depressing example that while right-wing anti-Semitism remains a widely condemned scourge, “progressives” remain proud of their support for those who treat Israel as the Jew among the nations – an evil, incomparably ‘creepy’ state that should be shunned and eliminated to make the world a more progressive place.