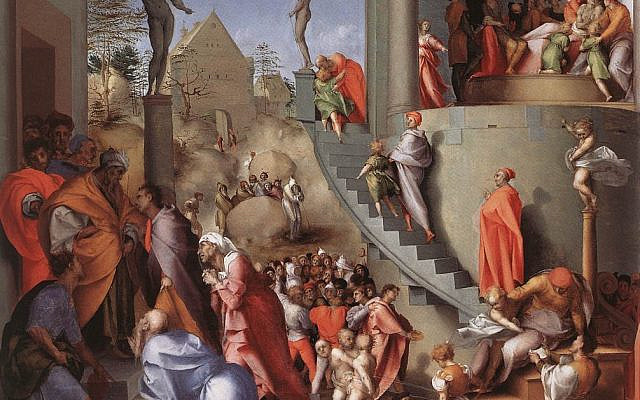 One of the most powerful themes in the biblical story of Joseph is that while he is rising to political prominence in Egypt, his father Jacob continues to believe he is dead. Jacob sank into a state of grief and despair on the day that his sons first deceived him into believing that Joseph had been killed by a wild animal. He did not emerge from that state until the moment, several years later, when they returned from Egypt to tell him that Joseph was, after all, not just alive, but was the viceroy of the land.

The ancient rabbinic interpreters of the Bible could not accept the idea that Jacob would be so self-absorbed, wallowing in grief, making no effort to understand why such a tragedy had befallen him, or how he was supposed to respond to it. This is the man who had spent his life overcoming adversity, standing up not only to his brother Esau and father-in-law Laban, but wrestling with God himself and prevailing. The man whom God had promised not to forsake, whose life would be lived under divine protection and through whom all the families of the earth would be blessed. Surely, the rabbis reasoned, a close examination of the text would show them that Jacob, far from being the victim of misfortune, was actually the instrument both of his own salvation and that of his descendants.

They found their answer in a single word, contained in an odd sentence: And Jacob saw that there was corn in Egypt and Jacob said to his sons ‘Why are you looking at yourselves?’ (42,1). What, asked the rabbis, did Jacob see, from his home in Beer Sheva, to convince him that he should send his sons to buy corn from Egypt? For, although there would still be some twists and turns on the way, this was the moment when Jacob’s life began to improve and the future destiny of Israel began to unfold.

The word that the rabbis homed in on was the Hebrew word for corn, shever. When written without vowels the word can also be read as sever, which means hope, particularly an aspect of hope that is grounded in reason. They found a verse, in Psalm 146, proclaiming that Jacob’s hope is in God. They deduced that the verse in Psalms was referring to this moment in Jacob’s life, his first positive moment since Joseph’s abduction, when he became filled with reasonable hope. Not simply because there was corn in Egypt, but because he was suddenly, once again, imbued with a spirit of prophecy. Jacob saw, said the rabbis of the Midrash, through a cloudy lens that his hope lay in Egypt. That was the moment that he sent his sons to buy corn from Egypt, the moment that led to his being reunited with Joseph. Far from being indulging his grief, Jacob seized the moment to become the architect of the future.

The rabbinic interpretation rests on reading the word shever, corn as sever, hope. But the reading is  only reasonable if we consider the rest of the sentence. Jacob asks his sons why they are looking at themselves; why they are introspecting, why they are consumed with inactivity. There is a famine in the land, the household is starving and yet the brothers are rooted in indecision, doing nothing, apparently accepting their fate. In the Midrashic interpretation of this verse, Jacob’s prophetic insight is contrasted with his sons’ vacillation. It is yet another illustration, one of several, in the biblical text, of the flawed characters of his elder sons.

Giving Jacob a prophetic role in the unfolding of the narrative also helps resolve another problem in the text. Joseph, his father’s favourite son, has become second only to Pharaoh in Egypt, the most powerful person in the land. Yet he has made no effort to tell his father he is still alive. This is a question that has bothered readers of the Bible for centuries. But of course, on this interpretation, he has no need to send a message to his father. Joseph can be confident that, through his prophetic insight, his father knows he is still alive.

Of course the interpretation of this Midrash throws up other problems. If Jacob knows that his hope lies in Egypt, why does he almost faint with astonishment when his sons eventually tell him that Joseph is alive? If Joseph has faith in his father’s prophetic spirit, why does he ask his brothers, when he finally reveals himself, whether Jacob is still alive?

One of the fundamental principles of Midrashic interpretation is that it can only be an adjunct to the plain meaning of the text. We cannot use Midrash to contradict what the Bible actually says. At the end of the day Jacob’s discovery that his hope lies in Egypt is nothing more than idea, a way of reading the text to stimulate further insights. Midrash can never be more than that.