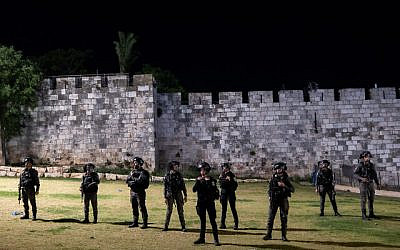 We Jews have been accused of a lot of things over the centuries, but up until now, stupidity has not been among them. The conduct of the Jerusalem Police over the last month or so has made me rethink that .

Some things are under our control.  This is one of them.  Rather than pointing fingers, I am convinced that it is much healthier to examine our own conduct and see what we can do better.  What happened in Jerusalem in the last month is a perfect example.

In the last weeks there has been increased angers among Arabs in Israel and on the West Bank. This anger is not without reason. Unfortunately, the Jerusalem police have served to increase that anger instead of trying to diffuse it.

One of the early mistakes it made was to blockade the entrance to Jerusalem’s Old City through the Damascus Gate — the Gate which leads from the Arab neighborhood immediately north of Old City into the Muslim Quarter of the Old City. This is the gate through which most of the Arabs who live north of the Old City go through to get into the Old City for various purposes, including going to shop and pray at Al Aqsa. The Jerusalem Police barricaded the gate so that nobody could go through it and stood looking as officious, oppressive, and militaristic as possible. After some initial rioting the Jerusalem police figured out that blocking the Damascus Gate was not such a good idea and took the barricades down.

At some point, a group of mostly-religious right wing Jews decided to throw gasoline onto the fire by marching near the Damascus Gate chanting, “Death to Arabs.” While this seems like a fairly obvious attempt by a group of Jews to incite a riot, instead of arresting any of the Jews for inciting a riot, the police attempted to separate the two groups, coming down harder on the Arabs, some of whom were, indeed, rioting than they did on the Jews.

A few days later, the Jerusalem police reinforced their image as oppressors when a Jerusalem policeman shot an unarmed, teenage Arab girl in the back with a rubber-coated bullet as she was attempting to walk into her home. Fortunately, the bullet “only” damaged her spine. While she was not killed, she will have a long recovery. Unfortunately for the police, the entire event was taped by an onlooker. That tape has been shown all over the internet. Not surprisingly, that tape increased the anger among Jerusalem Arabs. The police officer has been suspended.

There is no question that Hamas loves to see the anger of Arabs at Israel. The angrier they get, the better Hamas likes it. It took advantage of this anger when on May 10, 2021 it began firing missiles into Israel, some missiles reaching as far as Tel Aviv and Jerusalem.  That began a war which lasted for 11 days. The war  has been a great benefit to Hamas. According to a poll conducted by the Palestinian Center for Policy and Survey Research, 53% of the Arabs surveyed believe that Hamas is “most deserving of representing the Palestinian people.” According to the same poll, 77% of the Arabs polled believe that Hamas prevailed in the war.

That is bad enough, but it is the government and the police’s recent conduct has made me wonder whether they are using their brains. A mostly-religious, right-wing group of Jews decided to march through the Muslim Quarter for the annual Jerusalem Day march. While that march was postponed by the war, the march was rescheduled. The rescheduled march required the approval of Israel’s Security Cabinet, which is composed of politicians. Showing all the backbone of a wet noodle, the Security Cabinet approved the march, subject to approval by the Jerusalem police.

Hamas smartly threatened to respond if Israel allowed the proposed march to go forward. Predictably and stupidly, the Jerusalem police showed how tough they were. They weren’t going to cave in to Hamas and approved the march, allowing the marchers  to pass by the Damascus Gate before requiring  them to enter the Old City through the Jaffa Gate, which is in the middle of the wall facing West Jerusalem.

Those clever police also barricaded the Damascus Gate, again standing by the blockades looking as militaristic and oppressive as possible.

On Tuesday June 15, 2021, the march took place. It is estimated that 5,000 people, including three right-wing members of the Knesset, participated in the march. Not surprisingly some of the marchers again chanted “Death to Arabs.” Not surprisingly, there were riots again. Hamas must love it.

About the Author
After spending an adulthood as a lawyer in Colorado where much of my practice involved the public interest, I made aliyah. As I child I was told by my mother, a German, Jewish refugee, that Israel was a place for her and her child. When I came here, I understood what she meant. Though I am retired now, I have continued my interest in activism and the world in which I find myself.
Related Topics
Related Posts
Comments
Advertisement 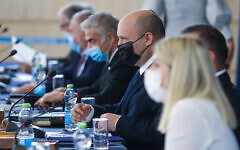