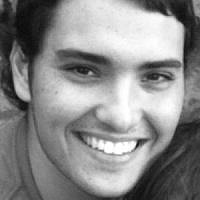 The Blogs
Aharon Friedland
Apply for a Blog
Advertisement
Please note that the posts on The Blogs are contributed by third parties. The opinions, facts and any media content in them are presented solely by the authors, and neither The Times of Israel nor its partners assume any responsibility for them. Please contact us in case of abuse. In case of abuse,
Report this post.

It’s inconceivable but true. Last week a bus load of Israelis and Palestinians — religious Jews, Muslims and Christians — travelled peacefully from Jerusalem to Tiberius to pray together.

I joined this expedition led by Eliyahu Mclean, coordinator of the Abrahamic Reunion.*

We travelled to the Tabgha Church of Multiplication in Tiberius just two months after the dreadful arson attack carried out by religious Jewish extremists. Significant destruction was wrought on this ancient monastery and place of worship which is almost 2000 years old.

Sitting in the sweltering Northern Israel heat, within the smoke-stained brick walls, the char in our nostrils, the expression of courage and hope uplifted us. Rabbis and religious Jews, Priest & Sheikhs expressed grief and deep sorrow at religiously motivated violence. With the hatred and mistrust, with the recent trauma and violence suffered by so many and with the divisiveness on all sides, it is easy to feel disheartened. It is also easy to feel angry.

It is not easy, however, to remember we are one family and to feel hopeful about peace. Yet, the pursuit of peace according to our Sages is the ultimate purpose of the whole Torah: “All that is written in the Torah was written for the sake of peace.” (Midrash Tanhuma – Tzav 3)

Perched on top of rambling green hills, overlooking the Kinneret (Sea of Galilee) a Rabbi, a Priest and a Sheikh spoke with one voice, the voice of religion. Rodef Shalom (Pursuer of Peace) Eliyahu Maclean, Father Mathias Karl, leader of the Tabgha church, and Sheikh Gassan Manasra director of Anwar Al Salaam (Lights of Peace) Association shared how this voice has to be heard saying “No! No more violence!”

Father Mattis, German Benedictine Monk explained how all Christians believe this to be the site where Jesus and his apostles fed 5000 needy, hungry people with just five loaves of bread.

We are so stuck fighting about our resources; this is my land, this is your land, this is my God this is your God. Somebody throws one match, it can start a huge fire and destroy. But the same way a fire can destroy, one little match of kindness, of love, of support, of us being here today, can spread like a fire. Who knows what this can lead to.”

Touching on these words, Rabbi Yaakov Drori of Tzfat shed light on the spiritual significance of this place, of the message of the multiplication. “(This attack) is against God, and against everything that we believe in. The work of God is about giving what I have, sharing with others, and this place; the Church of the Multiplication, is the symbol of that.”

Rabbi Alon Goshen-Gottstein, director of the Elijah Interfaith Institute fostering dialogue between Judaism and world religions initiated a fundraising campaign after he realised that the arson at Tabgha “was exclusively religious…and therefore people have to speak in the voice of religion and say ‘no’!” **

When religious Jews, Muslims and Christians get together in a show of support and against the spread of religious violence, racism and baseless hatred, we can spread a message of generosity. We can strengthen our love of God, and therefore of each other, with common goals and visions, not despite our differences but because of our differences. It shows the world that here are people determined to defeat this cancer of religious violence and hatred. This is the true work of God.

As is the practice every day in the Hebrew month of Elul, as the deepest call of prayer, Mordechai Zeller blew the shofar as a wake-up call to return to God. No words — not Hebrew, not Arabic, not English but the sound of the depths of our hearts. 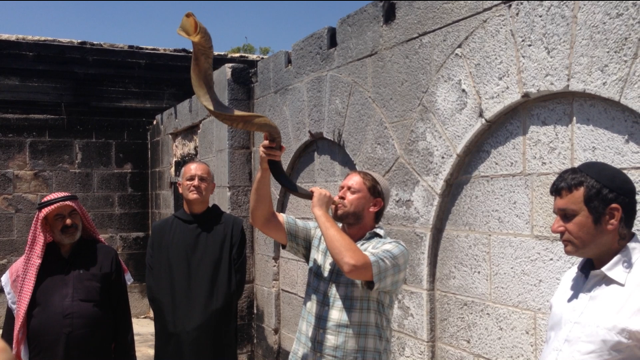 Mordechai Zeller (centre), alongside Father Matti, Sheikh Abu Adel (left) and Rabbi Drori (right), sounds the Shofar — a call for us all

Peace is not an abstract, left wing, atheist concept, it is the foundation on which our Torah is based. The presence of these religious individuals  — rabbis, priests and sheikhs — signals that we are not going to allow the extremists of our religions destroy and desecrate humanity and the name of God.

The only reason that the Holy One, blessed be He, created the world was so that there would be peace among humankind. (Bamidbar Rabbah 12A)

The Abrahamic Reunion, a group of spiritual leaders: Jews, Christians, Muslims, and Druze — have been working together for 10 years promoting inter-religious harmony in the Holy Land. We demonstrate by our personal example that we can live together in peace and cooperation.

At this difficult time, we want to reaffirm to the public our heartfelt conviction,  that (within) our religions is the pathways of love and peace.

We condemn the violence, hatred, racism, and suffering being inflicted upon our communities in the name of religion. We believe and we teach that the holy places of all the religions in the Holy Land must be respected, and not defaced in any way, for any reason.

** Although not all were present at this gathering, seventeen orthodox rabbis including Rabbi David Stav, Rabbi Nachum Rabinovitch of Ma’aleh Adumim and Rabbi Shlomo Riskin of Efrat helped to raise funds to rebuild the church, thus sending a message that rabbis will no longer tolerate religiously motivated violence.

About the Author
Aharon Friedland was born in South Africa, is an Australian citizen, and is currently living in Israel. He is studying at the moment at Yeshivat Otniel, in his second year of yeshiva. Aharon is involved in youth movement leadership.
Related Topics
Related Posts
Aharon Friedland
Comments