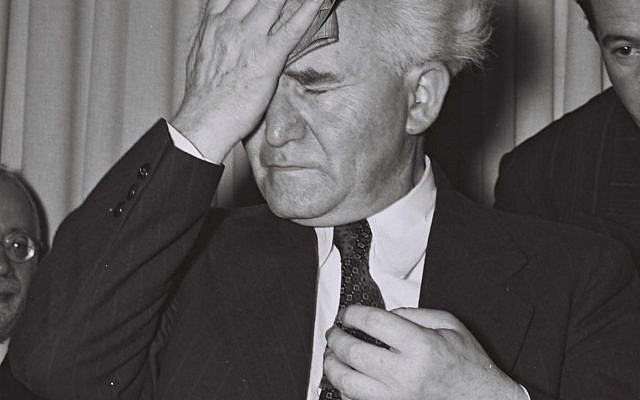 David Ben-Gurion before the declaration of independence, 1948. (Frank Scherschel, GPO)

The recent horrific attacks on Jews in New York have led some American Jews to think more seriously about moving to Israel. Less known, are the many Jews in Germany, Sweden, Holland, and several other countries who no longer feel safe where they are and are quietly packing up to go Israel. No matter what your political standing on Israel may be, we all must not take Israel for granted. To fully appreciate that, one only need to reflect on that time Israel never happened.

Jerusalem 1948- David Ben Gurion and the leadership of the Yishuv in Israel decided to do the logical thing, avoid an all-out war with their Arab neighbors. Reports showed that a declaration of a Jewish state would lead Syria, Egypt, Jordan, Iraq, and more Arab countries to attack. With heavy hearts, leaders of the Yishuv decided to avoid risking everything. The United Nations brokered a deal with the Arabs; the deal would extend the British mandate on Palestine and permit the immigration of 10,000 Jews a year to Palestine.

Hundreds of thousands of displaced Holocaust survivors would be granted citizenship in other member states of the United Nations. The world was more committed than ever, to protect Jewish minorities around the world.

The horrors of the Holocaust which could have been mitigated in through the 1938 Evian conference taught the world a lesson: we must stand up for Jewish minorities when they are threatened. Slowly but surely, year by year, Jewish life began to recover. Large Jewish communities in the United States, Canada, South America, France, Germany, Italy, and in the Soviet Union began to form. Jewish theaters, schools, and cultural organizations formed around the world. The world had learned its lesson; the danger and immorality of Antisemitism and complacency were finally clear to all.

True, countries like Iraq, Egypt, Tunisia, and more, which favored the Nazi occupation during the war saw an increase in intolerance to their large Jewish communities, but the world was committed to their protection. By the mid-1950s, mass migration from Arab countries became a real issue. While many Western countries showed grace and courage granting more than one hundred thousand Jewish refugees with citizenship. This saved those Jews from the plight of their brethren who remained, enduring violence and persecution.

Washington, 2020- the winter conference of Jewish leaders in Washington was not a happy place. Public anger against the Jews of Palestine was growing by the day. Having withdrawn from India, Hong Kong, and most of its other colonies, Britain was now ready to say goodbye to Palestine. No one thought they would miss it too much. Protecting the two million Jews who lived among the seven million Arabs was not a popularity-winning endeavor. American-Jewish leadership was in three different directions; between fighting rising levels of domestic antisemitism, advocating for Jewish refugees from around the world, and the need to find a solution for the stranded two million Jews of Palestine, their jobs were not easy. Chats of “From the River to the Sea Palestine Would be Free” can be heard on every campus across America. Many people around the world—including many Jews—supported the right of the Palestinian people for a state of their own, even if it meant removing the Jews from Palestine.

Having advocated for more than ten thousand visas for the Jews of Syria who fled the civil war, a staggering three hundred thousand for members of the former Soviet Union, two thousand for the hundreds of thousands of displaced Yemenites Jews, and even visas for several hundred Ethiopian Jews, American Jewry had a lot to be proud of. It was also were tired. They have overextended themselves with kindness and compassion for their Jewish brethren around the world; it was time to look inward. And yet, that was not a simple option either.

Negotiations for the withdrawal of British forces from Palestine began. Yassir El- Husseini, son of Jerusalem’s grand mufti, Haj-Amin El- Husseini continued in his father’s position as the leader of Palestine’s national movement, was charged with representing the Palestinian Majority. He demanded the immediate removal of all Jews living anywhere between the river of Jordan and the sea. His counterpart David Magnus, charged with representing the Jews of Palestine demanded an end to the spotted, yet ongoing, violence against Jews as a precondition to negotiations. Magnus demanded an autonomy for the Jews of Palestine which would extend along the coastal strip; stretching from Ashdod to Haifa, as well as the Kibbutzim of the North. Husseini wouldn’t hear any of it. The British, struggling with the woes of Brexit, and the Americans facing ever-increasing partisan rifts, were not in a position to broker a deal; no one was ready to put boots on the ground.

Panic ensued among the two million Jews of Palestine. Remembering the plight of the Jews of Syria, Yemen, Iraq, and Egypt, they knew danger was imminent. Repeated requests to the Jewish Federations of North America were returned with sympathy, yet with little concrete help. After all, how much can one community shoulder time and again? Now, Jews of the diaspora how their own battle to fight: the return of Anti-Semitism.

Many American Jews began thinking. What if our life becomes more similar to that of Jews in Europe? What if the rampant Anti-Semitism which was manifesting daily on the streets of Crown-Hights becomes the new norm in America? Where do we go then? With Europe no longer an option, Palestine on the verge of explosion, and China closed to migrants, a deep sense of despair quietly settled in. Jews who had the luck to try and claim Canadian and Australian citizenship began to do so frantically, but Jewish leaders knew all too well that the number of those would be limited. Once again, world Jewry— nine million in number— was feeling the noose tightening around its neck— with nowhere to go.

I a recent meeting with Israeli Ambassador Ron Dermer, one thing he shared with me and a diverse audience of Jewish American leaders, stood out more than anything: “no matter what your perspective is, don’t take Israel for granted.” No political conversation we American Jews are having, can ignore this simple fact.