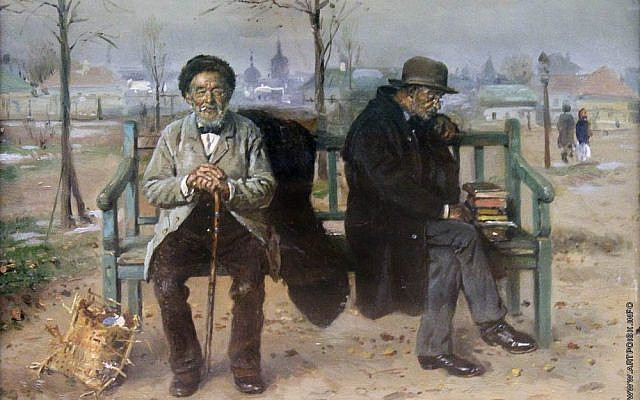 “Otto, you know what I just learned?”

“No Mort, I don’t know what you just learned.”

“Well, if  you click on Netflix’ search button—that’s the little magnifying glass symbol—and then type in the word “Jewish” a whole bunch of Israeli and Jewish-themed movies appear.”

“Well Otto, when I followed this procedure a French film entitled, They are Everywhere hit the screen; I decided to watch it.

A pretty interesting film—funny, irreverent and thought-provoking. It definitely merits a viewing.

And in that film, an actor—portraying a Jewish film director— sits and talks to his psychiatrist. The actor mentions that director, screen writer and producer, Billy Wilder once said, ‘The pessimists are in Hollywood and the optimists are in Auschwitz.'”

“Yah know, it took me several seconds to figure out what Wilder meant.”

“Mort, I got it right away. Because the way I heard it was, ‘The optimists died in the gas chambers, and the pessimists have pools in Beverly Hills. The Jews who were pessimistic about what Hitler was going to do to them fled Germany for the States and the optimistic Jews, the ones who thought Hitler was a passing phase, stuck it out in Germany and ended up in concentration camps. Wilder made a pretty astute observation from a Jew who got out of Germany early but who still lost his mother, his stepdad and his grandmother who remained behind.”

Yah, his quote got me thinking, ‘Optimism and pessimism are pretty complicated subjects. Everyone faces the same conundrum. Am I an optimist or a pessimist?”

“Well, Mort, I’m a pessimist. It was inbred into my personality and when it comes to Jews the glass is always half empty.”

“But it’s a true generalization. Based upon our unfortunate history, it’s pretty easy for us Jews to look at life through a dark filter.”

“Yet with each new generation, Jews keep talking about and writing blogs on how to cure anti-Semitism or even better yet, on how create peace between the Israelis and the Palestinians. Now, that’s optimism. Proving once and for all that there will always be Jews who see the glass as half full—even in Auschwitz.”