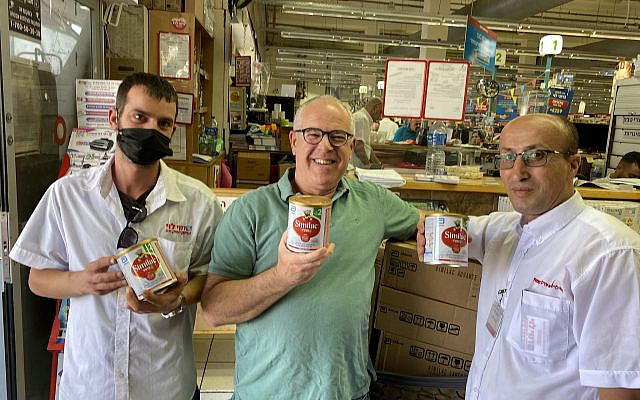 Buying the formula to help parents in need. (courtesy)

Without delving into why, the shortage of baby formula in the United States is shocking and troubling on many levels. With few exceptions, I think of the US as the land of abundance.  During World War II, my grandfather dealt on the black market to get bananas because my grandmother needed potassium.  Other than artificial shortages of oil (and gas) created by OPEC controlling the pipelines when I was a child, until recently outside of war time I am hard pressed to think of any time that in the US there was any particular shortage of anything.  A downside of this is the sense in America everything is so abundant that waste of things that are precious to others around the world is rampant.

Compounding “supply chain” induced shortages from anything to car parts, building supplies, and cream cheese, I was troubled to hear about a major shortage of baby formula in many states, and people turning to a unique means to get the precious powder that keeps their children nourished and even alive.  I don’t know if my grandmother’s need for potassium was life threatening, but the situation with baby formula today reminded me of my grandfather’s trafficking bananas, doing anything necessary to keep her well.

Before my second grandson started eating solid food, for much of his life he was using a particular formula that was non-dairy, non-soy, and not cheap.  This was due to allergies and was absolutely necessary for him to thrive.  That was stressful enough for my daughter and son in law.  I cannot imagine being a parent of a baby for whom there is simply no formula available.  If it were me, I’d turn to a black market if needed, drive to another state, or even fly overseas to get my baby what it needed.

So, since I was planning a trip to the US from my home in Israel where store shelves are fully stocked with formula, I decided to lend a hand, or rather a suitcase. Despite not traveling in two years, to its credit, United Airlines maintained my status allowing me an extra piece of luggage.  I joined social media groups of parents who were looking for, and sharing tips about where to find, formula.  I posted that I was willing to bring formula from Israel.

Despite one person cynically responding that it looked like a scam, I received lots of positive comments and personal requests from parents looking for particular kinds of formula.  I was concerned about bringing something to someone that wasn’t exactly what they needed, so went for the more traditional, off-the-shelf brands.

As I run the Genesis 123 Foundation which builds bridges between Jews and Christians and Christians with Israel, I reached out to a network of both Jewish and Christian friends where I would be landing and offered to bring as much as I could.  Yes, it’s a huge blessing bringing formula from Israel, literally a fulfillment of the verse in Genesis 12:3 which says that Israel will be a blessing to the families of the world.  I always had trouble with the word “families” and was inclined to broaden it to “nations.” I don’t know what God had in mind, but this is literally the fulfillment of blessing the families.

A few churches responded immediately and said they’d take as much as I could bring to give to families with young children. I didn’t distribute these in person, but it warms my heart to know that a number of families will have containers of baby formula with Hebrew writing sitting on their kitchen counters.

Since all this happened, I have had the occasion to teach many Christians the Hebrew word “chesed” which means kindness.  That’s not a word that will be printed on the containers of formula, but it is a word that will be infused in every bottle of formula. Personally, and on behalf of the Genesis 123 Foundation, there are few things that have excited me more in being able to make a meaningful, tangible difference, on a human level and as a blessing from Israel.

But it gets better. A major Israeli grocery store chain, Rami Levy, heard about what I was doing and offered me a discount to be able to participate in this “chesed.” Tawfik, the Palestinian Arab Moslem manager of my local branch from Hebron was moved to be able to participate. Then I started asking around if people had old suitcases they no longer needed, and in which I could pack and make a one-way trip to deliver the formula.  Several offers ensued, with thanks for letting them participate in this “chesed.”

I certainly never intended to make this a fund-raising project, but organically Israelis asked how they could donate. Whether the monetary discount, the actual donations, or just using an old suitcase as a way to deliver nourishment to children in America, I was moved how Israelis with no connections there jumped in to participate.  I mentioned this to a friend who thought it was such a good idea he also offered to buy and deliver a whole suitcase full of formula at his first stop to a church I work with there.

One of my board members in the US was so grateful that she made an extra donation, and encouraged me to offer others to be able to donate as well.  We discussed this that if I could find a flight that’s not too expensive, it would be worth making another trip just to do this.  Maybe with the donations that I wasn’t planning to ask for, I can take a trip that I wasn’t planning, and we can pay for another special delivery from Israel.

I pray that by the time I’d be able to consider another flight the formula shortage in the US will be resolved, and parents can rest easier.  Until then, who knows, maybe you’ll see me carrying along an extra suitcase of formula to help parents in need sooner than later.