The haftarah for “Shabbat Shuva,” the call to return to our truest and highest selves on the Shabbat before Yom Kippur is comprised of thee readings from Hosea, Micha and Joel.  I will permit myself also to string together several thoughts.

There are several well-known stories of rabbis calling on their congregations to eat on Yom Kippur during the Holocaust and in times of plagues and epidemics.  One of the best known, although there are many different versions, is of Rabbi Yisrael Salanter, who got up and ate in front of the congregation during the cholera epidemic of 1848. The debate is whether or not he blessed the food and wine. On a smaller scale, it is well known that one must follow a doctor’s advice if s/he tells you not to fast.  This is very relevant this year, in the midst of the the Covid pandemic.  The justification is that the commandments are given “so you shall live by them.” (Leviticus 18:5)  In the Jewish tradition, there are only three commandments that must not be violated, even to save human life: The prohibitions against murder, idolatry and sexual crimes.

This year we must expand this commandment way beyond the question of eating. It is also relevant to gathering.  Despite the fact that the number of Israelis infected with Covid is skyrocketing (I am waiting for the results of a test myself, and there is a good chance that I now have Covid. My apparent exposure was not at any gathering.), many sectors of the Israeli public feel that they are being unfairly targeted by Covid regulations, and/or the reason that they oppose the regulations is that what they are doing is of such importance that it outweighs life and death health considerations (just like eating on Yom Kippur).  Add in to the mix the fact that so many Israelis have lost trust in the government.

My record of civil disobedience demonstrates my firm believe that no government or any other authority should be followed blindly.  When I pray in the High Holy Day liturgy, “You will sweep the evil government from the earth, I admit that I think about both the Trump and Netanyahu governments.  I could easily add many others. However, the fact that on any given day somebody stands up and calls into question the most basic health precautions, violates “and you shall live by them.”

I have participated in the Balfour demonstrations to save Israel’s democracy, standing on the edge of the crowd in order to observe social distancing. Many others have not.  It is true that the right to demonstrate is a cornerstone of democracy.  The argument that the only solution to Israel’s corona crisis is a full time prime minister not consumed with keeping himself from being convicted may be partially true. but it cannot be an excuse for flouting social distancing. This is especially true given the fact that the demonstrations alone are not going to cause PM Netanyahu to resign.  The attempt to enforce pods at demonstrations failed. The fact that some of the politicians calling for the limitation of demonstrations are blatantly politically motivated does not motivate demonstrators to obey.  I agree with our Attorney General Mandleblitt who has stated that it is permissible to limit demonstrations in light of the health emergency, but the decision to limit demonstrations must not be made by the politicians who are the targets of the demonstrations, but rather by health officials.

I am a religious Jew, and a rabbi. Participating in public prayer is very important to me. It is an integral component of who I am, and what gives meaning to my life. I also find private prayer to be an opportunity for an intimate conversation with God, but there are times when one needs to be lifted up by those praying with you.  It is almost unbearable to think about synagogues being shut down, or limited. However, “and you shall live by them.”  I no more accept “but, they are allowing mass demonstrations” as an excuse, than I do “the imperative to defend democracy outweighs all other considerations.”  I do agree that there will be more public trust when it seems that the rules are consistent, but today many sectors in Israeli society, fueled by years of feeling holy victimhood, are not capable of rationally evaluating the restrictions being imposed upon them.  My syngogue strictly adheres to all regulations.

I feel the same way about weddings, and the other gatherings that various sectors refuse to compromise on.

Just as our Jewish tradition permits the violation of all but three commandments in order to preserve human life, we are in the midst of a crisis that demands of all of us to make painful compromises to combat the  Covid pandemic.

This week’s Torah portion, “Ha’azinu”  concludes with God reiterating that Moses is to die without entering the Land, for “breaking faith,”  failing to uphold God’s sanctity among the people (Deuteronomy 32:51). For leaders and public officials to fail to uphold the law is particularly egregious, because they are role models.

On a daily basis, we see in the Occupied Territories how law enforcement officials side with settlers to oppress Palestinians. This can be a sin of commission or of omission. This week we were protecting Palestinian shepherds from settler aggression in Dir Jarir, when one of the shepherds saw two settlers with a tractor dismantling an agricultural structure of another shepherd/farmer, and stealing the pieces.  Our volunteers rushed over in time to see the tractor on the main road, and later we followed the tractor into another outpost, where the stolen items were unloaded. We have pictures and video of everything.  This is in an area in which almost every seasonable and more permanent tent or other structure belonging to shepherds has received an order to dismantle, while unauthorized outposts go untouched.  I hope the owner of the stolen structure will not be afraid to submit a complaint, but I don’t accept the position of the police that they will do nothing without a complaint, despite the clear documentation of the theft by a settler “known to the police.” If a Palestinian stole in this way from a Jew, the police would be all over it. (And, the Jew would not be afraid to complain.) 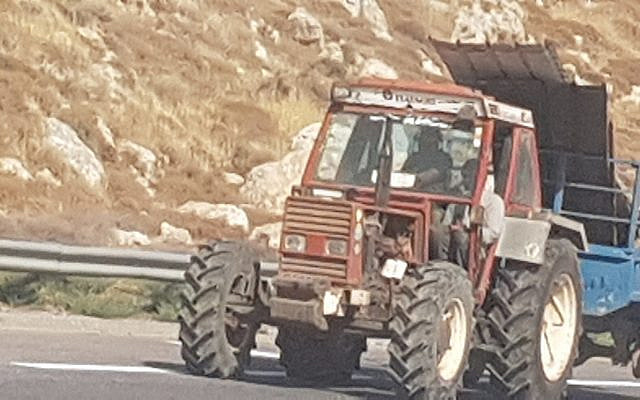 It is clear which side the police are on. Today, a settler and his flock were on private Palestinian land, trying to push out a Palestinian shepherd.  Our volunteers frustrated that, so the settler shepherd tried something else. He left a few of his sheep behind. A few moments later the police showed up. I have no doubt, as the Palestinian shepherd feared from past experience, that he was being framed for having stolen sheep.  However, we were witnesses. What did the police do? They said we had to leave because we were violating Covid regulations. I just finished explaining why we all need to observe Covid regulations. However, we had a permit because our work is in the open air, and allows us to maintain way more than the required social distancing.  The officers were not interested in our permit.  They had come to perhaps detain an innocent Palestinian shepherd, and our presence prevented that.

On this eve of Yom Kippur, it is not just a matter of returning, because I don’t know that we ever had the ideal society.  But it is a matter of returning to our true potential. May we achieve a society in which our disagreements are mediated by a shared   respect for the common good and a commitment to life.  May that commitment to the common good include Palestinian farmers and shepherds.