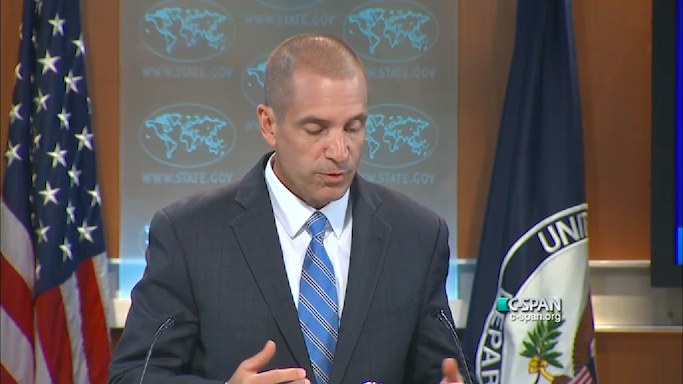 U.S. State Department deputy spokesperson Mark Toner appeared dumbstruck yesterday when AP reporter Matt Lee, following up on our tweet from Saturday, asked him why the State Department said last year that it was “appalled” by Israel’s “disgraceful” shelling, after it accidentally hit a school in Gaza, yet took an altogether different approach this weekend when the U.S. accidentally shelled an Afghan hospital.

Following the U.S. bombing on Saturday in Kunduz that killed 19, I compared it with last year’s bizarre statement by the Obama Administration, which was more akin to a typically-prejudiced UN reaction:

Our spotlight on this hypocrisy got picked up quickly and was sent to AP correspondent Matt Lee.

At the next day’s daily State Department briefing in Washington, Lee pointedly asked it if were still Administration policy that, as they told Israel last year, “the suspicion that militants are operating nearby a site like this … does not justify strikes that put at risk the lives of innocent civilians.”

Evidently startled by the question, deputy spokesperson Mark Toner –looking down and stumbling over his words, as you can see in this video — struggled desperately for several minutes yet failed to explain in any way the glaring inconsistency exposed by recent events.

Though his department condemned Israel immediately, before the facts of Hamas action in the vicinity were known, in the case of the U.S. shelling, said Toner, “the facts are still emerging”, “we’ll let those investigations run their course,” and “we’re still collecting the facts.”

AP’s Matt Lee pressed again the obvious hypocrisy given the State Department’s opposite reaction to the Israeli incident.

It’s just – uh, look, Matt, um, you know, I think it’s safe to say, you know, that this attack, this bombing, was, uh, not intentional. I can’t get into what may or may not have happened on the ground, whether the coordinates were known, whether they were acknowledged. It’s just too much speculation at this point.

And then the State Department requested a basic courtesy that it would not grant Israel:

So you’ll hopefully, uh, give me a pass if we wait for the investigation to run its course.

Perhaps next time the State Department will apply the same common sense approach to Israel’s fight against Islamist terrorists that it applies to that of its own military. Transcript follows below.

AP (Matt Lee): Right. I want to start in Afghanistan.

AP: I realize that the Pentagon has already spoken to this —

AP: — as has your colleague at the White House. And I do understand I’m coming at this with understanding that the State Department is probably somewhat limited and – well, first of all didn’t really have – play any role in what happened in Kunduz. But also because of the investigation that’s underway, I understand you’re going to – you’re not going to have much to say beyond what has already been said.

AP: But what I want to ask about is just Administration policy in general. So not that long ago – in fact, just a little over a year ago, in August of 2014 – Israel, during the Gaza conflict, was accused of and, in fact, did bomb a – an UNRWA school in Gaza that killed about 10 people – or did kill 10 people. At the time, this building – in fact, the spokeswoman – issued a statement that was very, very strong, saying, “The United States is appalled by today’s disgraceful shelling outside an UNRWA school in Rafah sheltering some 3,000 displaced people. The coordinates of the school, like all UN facilities in Gaza, have been repeatedly communicated to the Israeli Defense Forces. We once again stress that Israel must do more to meet its own standards and avoid civilian casualties. UN facilities, especially those sheltering civilians, must be protected and must not be used by bases from which to launch attacks.”

And then the sentence that’s key here, and this is what I want to ask about, it says, “The suspicion that militants are operating nearby does not justify strikes that put at risk the lives of so many innocent civilians.” And then it goes on to call for an investigation.

So I just want to – let me see – is it Administration – still Administration policy that the suspicion that militants are operating nearby a site like this, which is a school, that that suspicion does not justify strikes that put at risk the lives of innocent civilians? Is that still the Administration’s position?

STATE DEPT: Well, first of all, um, you know, I just would like to add the State Department’s voice to what the President and Department of Defense have already said. We mourn, obviously, the loss of life at the Doctors Without Borders/Medecins Sans Frontieres hospital in Kunduz which occurred on October 3rd.

Uh, you know, it goes without saying these doctors perform heroic work throughout the world including in Afghanistan, and our thoughts and prayers are with the families, friends, and colleagues of those affected by this tragic incident.

What we’re looking at right now in terms of what happened in Kunduz, the facts are still emerging. There’s, I think, now three investigations underway: one by the Department of Defense, one by Resolute Support, and I think one joint Afghan and U.S. investigation. So we’ll let those investigations run their course.

But generally, these are difficult situations. It was, I think – General Campbell spoke to this as well, saying that it was an active combat zone and just trying to put that in the framework that they were called into – that air strikes were called in, without necessarily even saying that these were the airstrikes that hit that hospital, because we don’t know yet. We’re still collecting the facts.

AP: Right. I understand that and I understood —

AP: But my question was not about the idea – and I’m not challenging the idea that you take – that the military makes every effort to avoid civilian casualties. What I’m most curious about is that this statement said the suspicion that militants are operating nearby does not justify strikes, which – and the military has said that it was called in because the Afghans asked for it. But MSF says that they had been given the coordinates much in the same way the IDF had been given the coordinates of the school in Rafah.

So the question is – and I realize this is under investigation. But the question is if – the question is: If the suspicion that militants are operating nearby does not justify strikes on a humanitarian facility for which the coordinates had been given, that it seems to have changed.

STATE DEPT: It’s just – uh, look, Matt, um, you know, I think it’s safe to say, you know, that this attack, this bombing, was, uh, not intentional. I can’t get into what may or may not have happened on the ground, whether the coordinates were known, whether they were acknowledged. It’s just too much speculation at this point.

STATE DEPT: So you’ll hopefully, uh, give me a pass if we wait for the investigation to run its course.

AP: Okay. That’s – and that’s fine. I understand it. But in the case of this – the Rafah situation, you called for a full and prompt investigation of this incident, as well as others like it.

AP: But that statement began by saying that the U.S. is appalled by the disgraceful shelling. That’s before an investigation even happened. So can you say now, knowing what you did, that you – that this shelling of this hospital was disgraceful and appalling?

STATE DEPT: Um, again, I, I would only just reiterate our, uh, our, uh, sincere condolences to the victims of this attack and just again underscore the fact that we’re going to investigate this thoroughly. And as I said, once those investigations are complete, we’re going to take steps to – either to hold any responsible parties accountable or to take measures that avoid any kind of accident like this in the future.