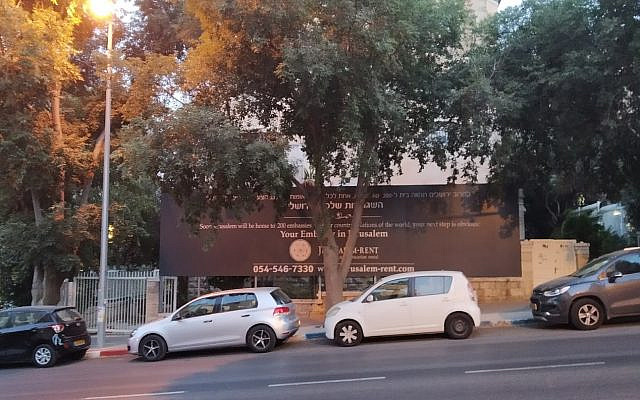 "Soon Jerusalem will be home to 200 embassies," reads this hopeful billboard from a Jerusalem developer. Photo: Author.

It’s been a frenetic few weeks on the diplomatic front for Israel.

To recap some of the breathtaking developments (and what’s speculated might be next to come):

Meanwhile, news of potential embassy openings in Jerusalem has been equally fast paced, undoubtedly accelerated by Israel’s unexpected breakthroughs in normalizing its relations with the Arab world:

The US and Guetemala: A Lonely Duo 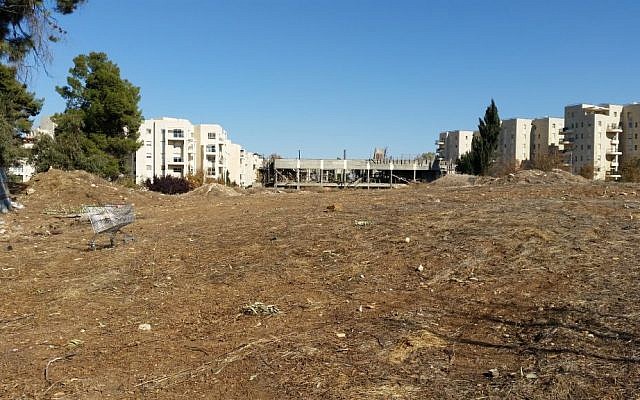 Allenby Barracks located at the junction of Derekh Hevron and Daniel Yanovsky street which is reportedly one of the sites the US is considering for a Jerusalem embassy. Photo: Raphael Ahern / TOI

Despite the ambitious signage erected by some Jerusalem developers, promising that “soon, Jerusalem will be home to 200 embassies,” (above) Israel’s capital is currently home to only two of the 89 resident embassies in the State of Israel, the vast majority of which are located in Tel Aviv and the adjoining city of Ramat Gan.

The United States famously moved its mission to Jerusalem in May 2018, prompting speculation that an influx of embassies was about to begin. Currently, the US Embassy is located on a meandering road off the Arnona neighborhood — housed in the same building that, up to the change of status, housed the US Consulate to Jerusalem. The mission in Arnona also formerly subsumed the Consulate close to the King David hotel in downtown Jerusalem which was shuttered after the State Department vested the Embassy with authority to engage in direct talks with the Palestinian Authority (PA). However, the site is not intended to serve permanently as the US’s Embassy in Israel. Apparently a site closer to Derekh Hevron, in Arnona, is the preferred location.

The only other UN member state with a permanent embassy currently in Jerusalem is Guetemala, whose mission is located within the high tech park in Malha in South Jerusalem. Guetemala and Paraguay both moved their embassies to Jerusalem shortly after the US did but only Guetemala stayed put. Just four months after moving to Jerusalem, Paraguay, a poor Latin-American country of just under seven million citizens, returned to Israel’s coast — causing Israel to shutter its mission to the country in turn.

Amid the frenzied excitement that accompanied the US’s move, few noted that it was not the first country to have moved its embassy to Jerusalem since the foundation of the state — or that Jerusalem previously enjoyed a now historic embassy era.

Until 2012, Paraguay itself maintained its embassy in Mevasseret Tsion. According to Israeli journalist Gideon Remez, the city was once home to 13 embassies with El Salvador the last country to up sticks and move back to the coast. According to Remez Israel’s passage in 1980 of Basic Law: Jerusalem, Capital of Israel — which affirmed Israeli sovereignty over both halves of the city — gave the remaining embassies the impetus to leave.

Other even older missions to Jerusalem were and are primarily ecclesiastical in nature. The Vatican maintains a mission in the East of the city. The Russian Consulate — now a historical landmark — was established in the mid 19th century. Jerusalem’s oldest formal diplomatic missions represented the interests of pilgrims. Most of its current ones liaise (quietly) with the PA. And perhaps in the future they will be accredited to the State of Israel. 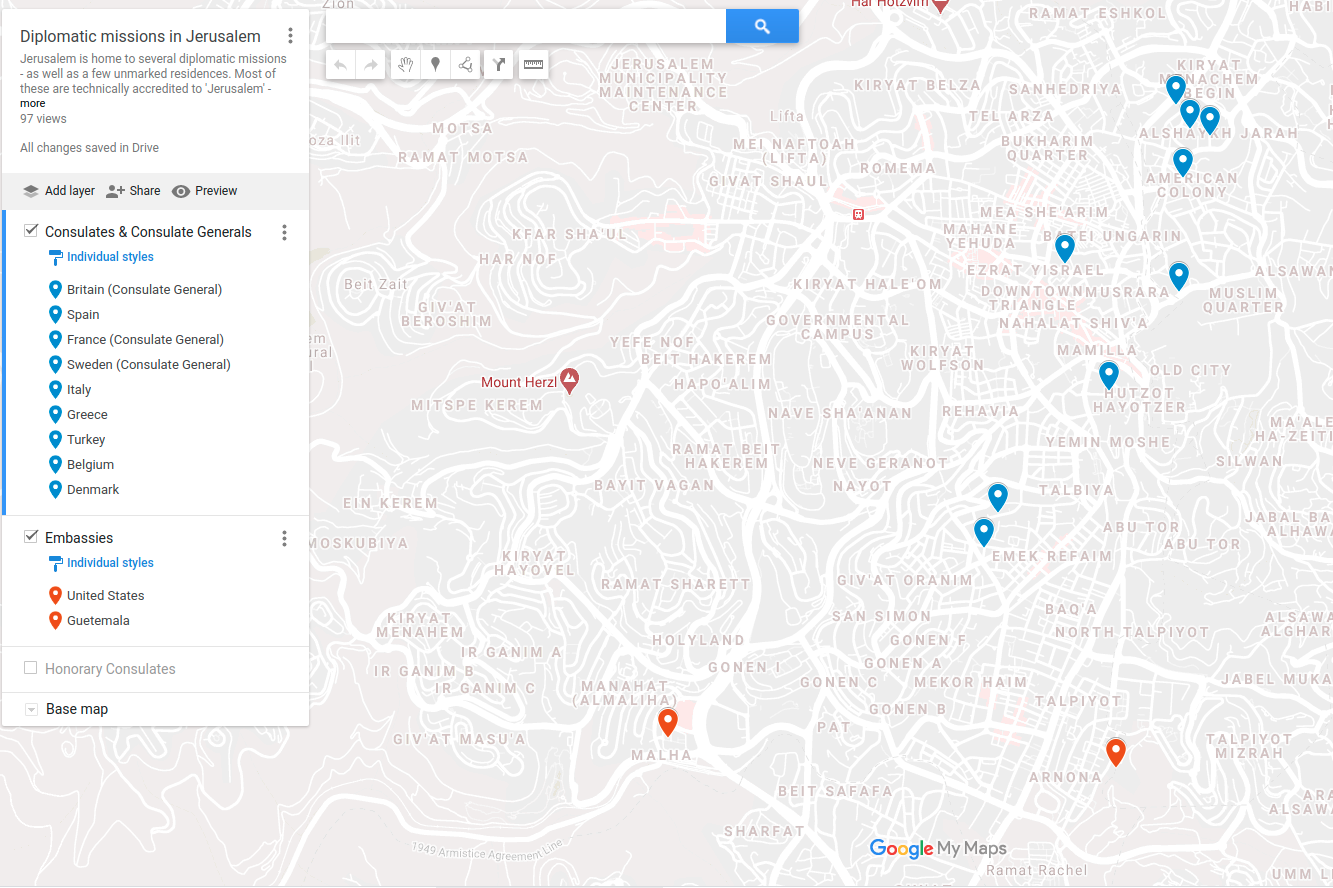 A custom map of embassies and consulates in Jerusalem. Source: Author.

These days, in addition to the two embassies currently located in Israel’s capital, the city is home to nine consulates and consulate-generals (a consulate general is typically the highest ranking mission below an embassy for countries that maintain a network of consulates in a receiving country).

Many mistakenly assume that these are diplomatic missions to the State of Israel, although subtle clues — like the absence of Israeli flags at these missions — belie the strange truth. Surprisingly, not only is this not the case, but none of the missions in the city even recognize Israel’s claim to sovereignty over Jerusalem (at least not past the Green Line).

As Eylon Aslan-Levy reported in this excellent piece for The Tower the missions are sui generis institutions in several respects. For one, in most cases, they are officially accredited to Jerusalem — the city — in a strange hangover from the time when the international community envisioned Jerusalem as a corpus separatum, governed by a plurality of foreign nations, or rather by a taskforce of them. An examination of the websites of the missions bears this out. The website of the British Consulate General in Jerusalem, for instance, describes the mission’s purpose as representing the UK “in Jerusalem, West Bank, and Gaza.” The Wikipedia page for the Consulate General of France in Jerusalem — which has a colorful history dating back to the 17th century — baldly notes that the mission “does not have diplomatic relations with the State of Israel.”

De facto the mostly European missions in Jerusalem serve as representations to the Palestinian Authority (PA) — quasi-embassies effectively despite their formal status as consulates — while Israel begrudgingly tolerates their continuance in a city they refuse to recognize its sovereignty over.

Several are also self-contained diplomatic missions not subservient to their sending country’s embassy to the State of Israel — located, of course, an hour’s drive to the West. There are other less intriguing curiosities about them. Nobody I have spoken to — including those working at missions to Ramallah — seems quite sure why some missions to the PA are based in Ramallah itself while others are stationed in Jerusalem. It’s a strange situation — in both its history and its continuation. 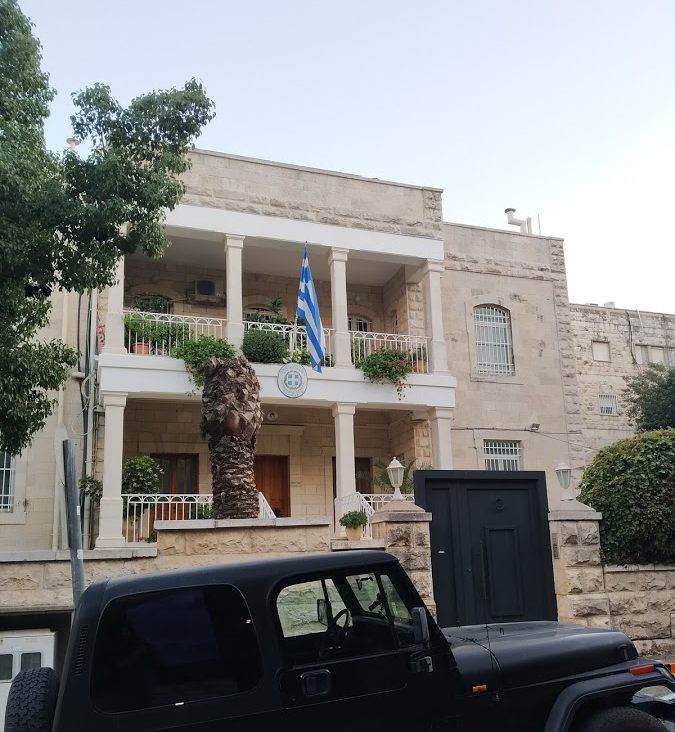 Most of the international community continues to repudiate Israel’s claims to sovereignty over the city of Jerusalem — at least the whole of it. Israel’s sovereignty over the the part of the city to the West of the Green Line is a consensus issue only on a de facto basis, although, amidst warming ties, Russia recognized Israel’s sovereignty over West Jerusalem de jure in 2017. Progress in the international community’s relationship with Jerusalem, where it comes, is fitting. And the poisoned root of the issue — and of the strange preponderance of “foreign” embassies in Jerusalem — is Israel’s conquest of East Jerusalem, in 1967, which was done by force and promptly deemed illegal by the United Nations (UNGAR 69/12). The poisoned relationship most countries have with Jerusalem is far-reaching. The protocol of most countries requires their Israeli embassies to studiously refrain from holding national day celebrations in the city. But interacting with Israeli government bodies there is, of course, a requirement of the job.

So who exactly is “in” Jerusalem besides the two embassies to the State?

The UK, Spain, France, Sweden, Italy, Greece, Turkey, Belgium, and Denmark all maintain Consulates or Consulate-Generals in the city. While the missions of France, Greece, Denmark, and Italy are located to the west of the Green Line, the others are nestled in East Jerusalem (along with several residences of heads of mission — both those whose representations are based in Ramallah and in Jerusalem itself). The latter are clustered around the relatively opulent Sheikh Jarrah neighborhood.

Last but not least, Jerusalem, like most world capitals, is home to a smattering of honorary consulates usually only noticeable by an errant plaque and national flag atop a private residence.

Honorary consulates are quasi-amateur diplomatic missions usually helmed by an unpaid individual who serves as a bridge between the countries (in Israel such individuals tend to be Jewish immigrants, whether first or second generation). The honorary consul is typically vested with some diplomatic responsibilities — such as issuing emergency passports — but is neither typically a paid professional nor do they enjoy the full diplomatic privileges granted to professional diplomats under the Vienna Convention. 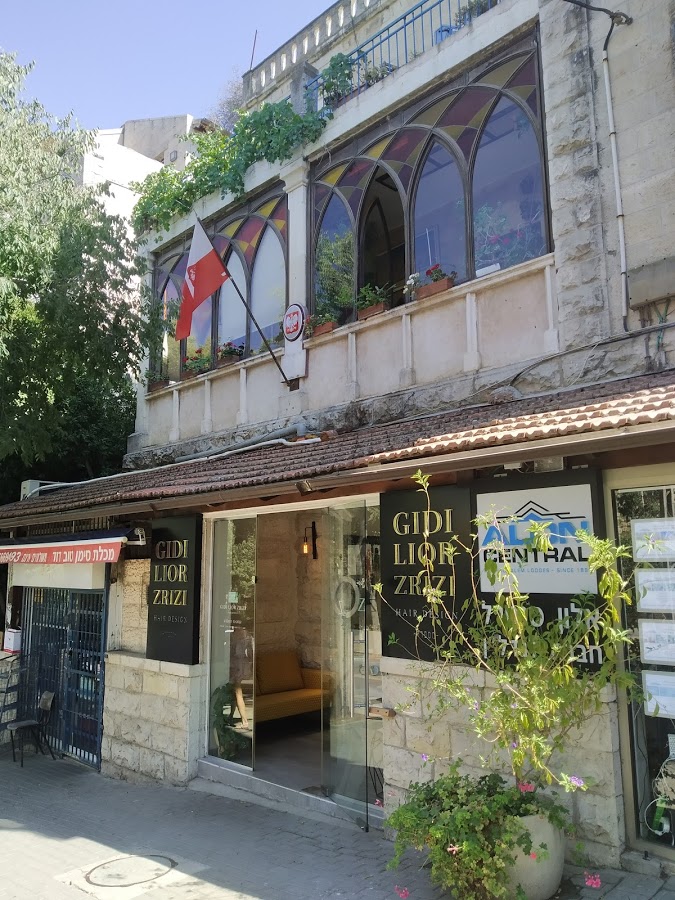 A flag and seal mark the location of Poland’s honorary consul in Jerusalem, located somewhere in the Rehavia neighborhood. Source: Author.

Where Will Jerusalem’s Diplomatic Quarter Be? 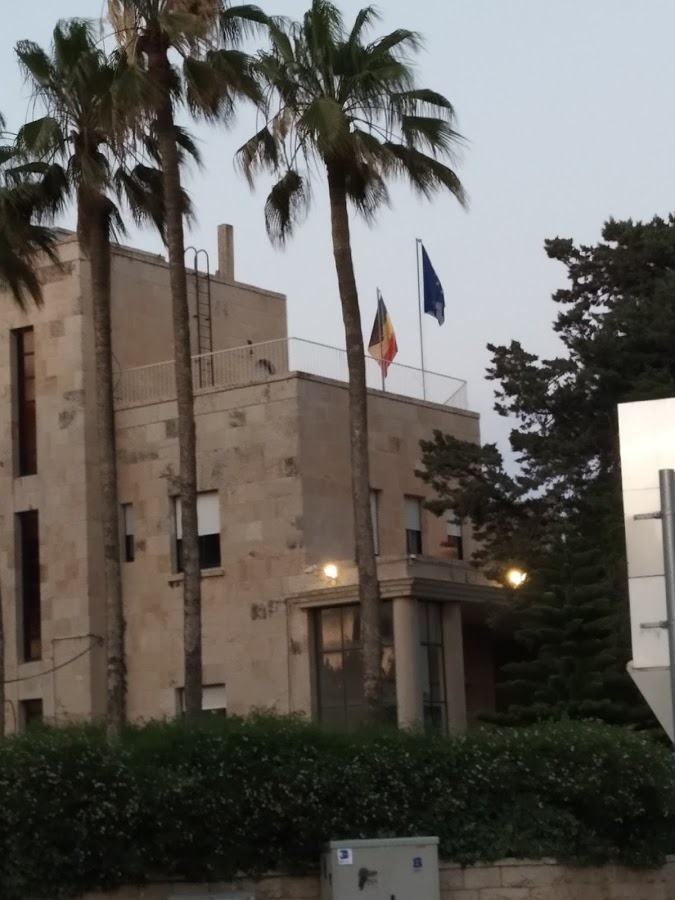 The residence of Belgium’s Consulate in Rehavia. Source: Author.

Undoubtedly, Israel is strongly committed to encouraging the nations of the world to move their embassies from the coastal cities of Tel Aviv and Ramat Gan to Jerusalem — and, despite the doubts of some, that dream appears to be slowly becoming a reality. Signs of the encroaching foreign diplomatic presence in the city are subtle. Last year, Australia opened a Trade and Defense Office in Jerusalem. It’s tucked away, somewhat incongruously, in the city center WeWork, sharing floor space with freelancers and tech entrepreneurs. Last year, Hungary opened a trade office in the city. The Hungarian PM was keen to emphasize that the mission was to enjoy “diplomatic status.”

Encouraged, no doubt, by these small advances, Israel continues to do its part to make its dream of the dawn of the embassy era in Jerusalem a reality — although almost undoubtedly more lobbying for this takes place behind the scenes than in front of them.

As a means of pressuring nations to avoid using backdoor methods to obtain diplomatic representation in Israel’s capital, the Foreign Ministry has said that it will refuse to accredit any new honorary consuls in Jerusalem. Given that, in the space of a month, Israel has struck a normalization accord with the UAE and three embassies have committed to moving to Jerusalem it no longer seems so crazy to ask: “where are they all going to go?”

And if they do all move to Jerusalem, the question looms as to how they will all fit into a city that is notorious for its overcrowding and complicated politics?

Will major Western countries opt for power plays like the United States or make do with more modest surroundings, as is the case with many missions in Ramat Gan? What neighborhood will be Jerusalem’s Embassy Row (Washington DC’s embassy neighborhood)?

While that question might depend upon the arrival of a critical mass, the property developer’s rosy prognostics about an impending wave of embassy arrivals mightn’t turn out to be far wrong.

Although only 85 countries currently maintain embassies in Israel, there are more than 190 UN member states. The discrepancy between the two is due to the fact that some smaller countries maintain relations with Israel through their embassies in other countries (such as Cyprus; this practice is known as maintaining non-resident ambassadors). Additionally, Israel does not have diplomatic relations with a variety of nations including, up to recently, the UAE. Both situations are theoretically fluid. In other words, it is conceivable — if unlikely right at this moment — that more than 100 countries might one day move their missions to Jerusalem.

Today, that thought might still have a ring of fanciful speculation. But given the pace at which events are changing, change is on the horizon. As a a firm believer in crowdsourcing, I asked my favorite Jerusalem-based Facebook group where people thought a diplomatic district could emerge in the city. After all, embassies tend to cluster together — and usually base themselves in more affluent parts of capital cities. Where in Jerusalem fits the bill?

Here were some suggestions floated, including my own:

The influx of embassies to Jerusalem that Netanyahu could bring a small influx of international diplomats and visitors to the city. It could be a return to Jerusalem’s previous embassy era — times 10 — filled with missions who are actually there to represent their countries to the State of Israel.

If and how that might happen will be an interesting process to observe.