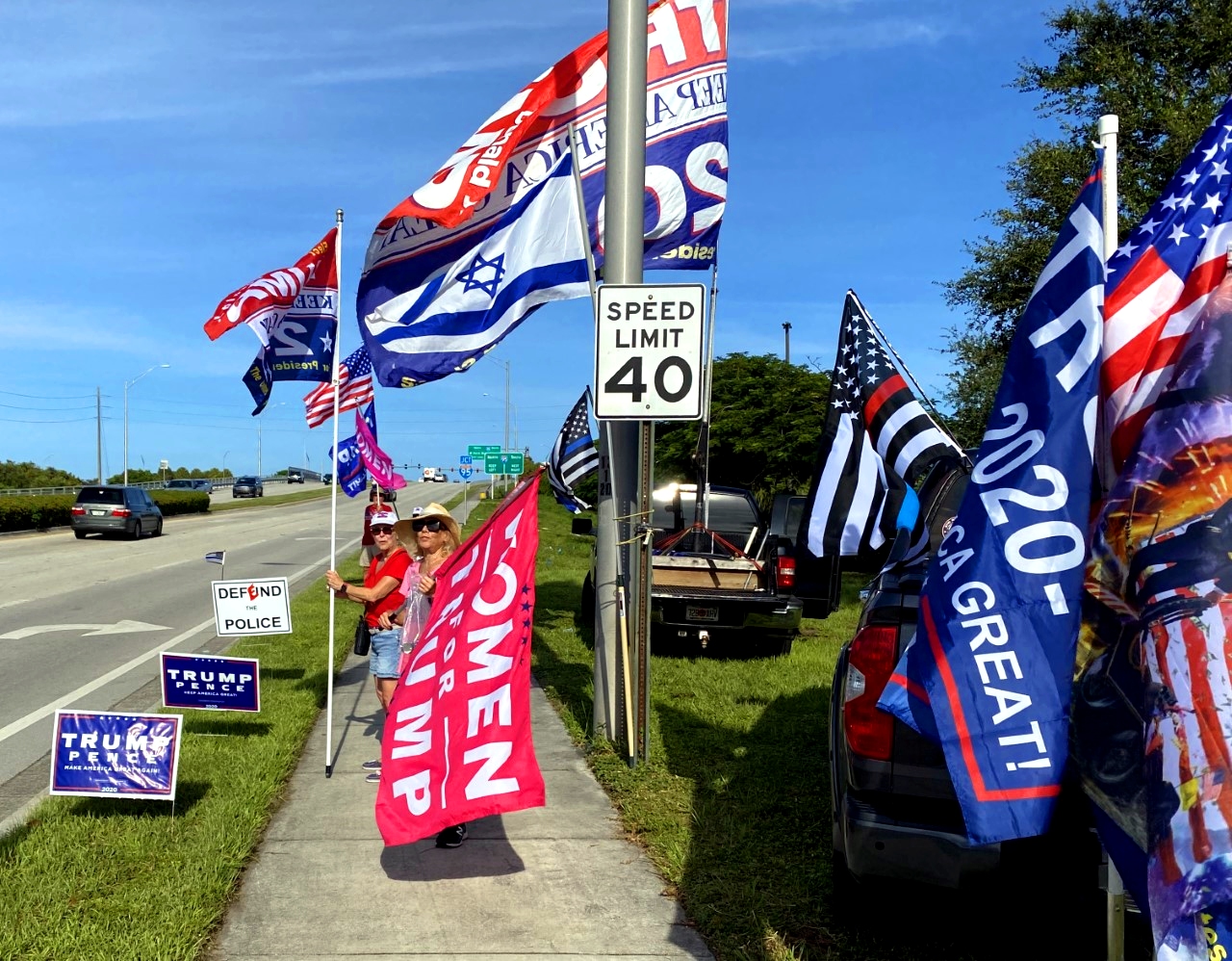 Enthusiastic, flag-waving Trump rallies are getting to be more and more common.

Where are the Biden Rallies?  The media solidly informs the election is over. Trump will lose.  Pollsters confirm their samplings, amplified by academically refined algorithms, Biden never has to leave his basement to defeat Trump. The flag-waving street corner rallies of the Trumpsters are the flailings of the end.

The lights change and another wave of cars drive by. The flag-waving, the cheering, and waving to drivers pick up.  Horns honk, thumbs go up, cell phone cameras record the enthusiasts with approving amazement.  They are out there.

All was not approval.  About a ¼ of the cars driving by honked and saluted with their Middle Finger wave of derision.  A few slowed to roll down their windows and scream – “Black Lives Matter.  You are all horrible Racists.”

Jews have been slaughtered in the U.S. by anti-Semitic monsters.  Antisemitism, disguised as Anti-Zionism, is blossoming on College Campuses, formerly bastions for freedom of ideas, speech, and toleration. Where is Jewish Lives Matter?  Where are the Jews, if not now, then when?

The majority, by far, of American Jews are anti-Trump.

Trump has withdrawn from the disastrous Nuclear Iran Deal. A nuclear-armed Iran, without a doubt, would mean death for Israel, for the Jews.

Trump continues to impose, even if alone, sanctions on Iran, the world’s number one State sponsor of Terrorism.

He moved, not just promised to move, the U.S. Embassy to Jerusalem.

He signed the Taylor Force Act. U.S. funds may not be used to pay terrorists to maim and murder Americans and Israelis. The current Pay for Slay Palestinian policy.

He recognized Israel’s sovereignty over the strategic Golan Heights.

He stopped funding UNWRA for enabling, promoting, and teaching terror. He closed the PLO office in Washington, D.C.

He has appointed the most pro-Israel U.S. Ambassadors to the U.N. in decades. Trump stands by Israel, unflinchingly against the world haters in that body.

He refuses to bend the knee to BDS supporting Members of Congress.

He declared Israeli settlements in Judea and Samaria legal under International law.

Trump has done the incredible.  He brokered a peace between the United Arab Emirates and Israel. He opened the door for broad Arab-Israeli peace. He should get the Nobel Peace Prize for bringing peace, not just hope.

The Palestinians, if they will read the writing on the wall, peace, and justice for them, can be achieved by negotiation, not missiles, suicide bombers, and terrorism.

Perhaps the most important of all, Trump affirms again and again, Israel’s absolute right to self-defense.

Ironically in the United States, the right of Americans to self-defense against rioters, left-wing fascists, and anti-Semites is being canceled with calls to de-fund the police. Justly, Jews are in the front lines of justice for Black lives. Where are the Jews for Jewish Lives Matter?

A Trump flag-waver on the street told me, “you have to keep an eye out.  The hatred of some for Trump supporters could accidentally cause them to lose control of their cars.”

“Don’t threaten us with cutting off your aid. It will not work. I am not a Jew with trembling knees. I am a proud Jew with 3,700 years of civilized history. Nobody came to our aid when we were dying in the gas chambers and ovens. Nobody came to our aid when we were striving to create our country. We paid for it. We fought for it. We died for it. We will stand by our principles. We will defend them. And, when necessary, we will die for them again, with or without your aid.”

I am confused.  The majority of American Jews will, obviously, confirm I am confused or worse.