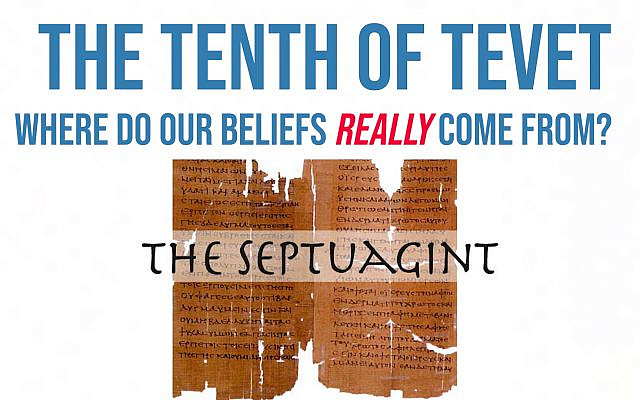 Today, the 10th of the Hebrew month of Tevet, marks the day when the Babylonian armies in 425 BCE laid siege to Jerusalem, the first in a chain of events that ultimately led to the destruction of the Temple in Jerusalem. This is the primary reason we fast today, but there is another less-talked-about reason why we fast: we are mourning the translation of the Torah into Greek – what was called the Septuagint. The Egyptian-Greek emperor Ptolemy gathered 72 Torah sages, had them sequestered in 72 separate rooms, and ordered each of them to produce a translation which they did.

But why is this a reason to mourn? Are we not supposed to be a “light upon the nations”? What better way to spread the light of the Torah than to make it understandable and accessible to other people? The Jewish Sages however consider the translation of the Torah into Greek at this time to be an exceedingly dark event, one of the reasons the Jewish people are meant to fast on this day!

It seems as though the Greek interest in translating the Hebrew Bible was not to expose the world to the genius and wisdom of the Torah, but to use it to further Hellenize the world. The Hellenists had their own philosophy which centered on physicality. They denied the existence of the supernatural or the spiritual and believed only in what could be perceived by the five senses. This is why in the Chanukah story the Greek Hellenists required Jews to bring sacrifices to the Greek gods of Zeus and Hercules, figures with perfect physiques. They worshipped the body and anything physical. The Jewish Sages were concerned the Greeks would use their newly translated Torah to further their already existing ideology, and not present the Torah for its own unique outlook on existence.

This is a relevant point for us modern Jews: we look at the Torah and readily accept those parts that fit into our preexisting sense of right and wrong, but we often dismiss the verses or ideas that seem to conflict with our already accepted beliefs. The Torah was ultimately given to help us formulate those beliefs to begin with – not to simply confirm what we already believe or reject that which seems counter-cultural. This can be a difficult challenge because there is thankfully a lot of overlap between what the Torah views to be moral and true and what we have been raised to believe in Western civilization. But there are certainly parts of Judaism and modern Western culture that clash, and what then becomes our attitude? In those moments we are forced to ask ourselves: where does our ideology and outlook on life actually come from? Does it emerge from other cultures and ideologies to which we have been exposed or are they rooted in the Torah – an expression we believe of divine wisdom.

The Greeks, it appears, were trying to squeeze the Torah into their own preexisting belief system. Today on the 10th of Tevet, we ask ourselves whether we are guilty of doing more or less the same thing: are we trying to fit our Judaism into a preexisting lens to view reality or do we aspire to use the Torah as the very lens itself?

Wishing you a meaningful rest of the fast.

About the Author
Rabbi Mark Wildes, known as The Urban Millennials' Rabbi, founded Manhattan Jewish Experience (MJE) in 1998. Since then, he has become one of America’s most inspirational and dynamic Jewish educators. Rabbi Wildes holds a BA in Psychology from Yeshiva University, a JD from the Cardozo School of Law, a Masters in International Affairs from Columbia University and was ordained from Yeshiva University. Rabbi Mark & his wife Jill and their children Yosef, Ezra, Judah and Avigayil live on the Upper West Side where they maintain a warm and welcoming home for all.
Related Topics
Related Posts
Mark Wildes