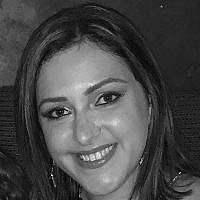 The Blogs
Natanella Har-Sinay
Apply for a Blog
Please note that the posts on The Blogs are contributed by third parties. The opinions, facts and any media content in them are presented solely by the authors, and neither The Times of Israel nor its partners assume any responsibility for them. Please contact us in case of abuse. In case of abuse,
Report this post.

When we say “never again,” it’s not just a catch phrase. What we’re saying is that never again will we be silent while others spread false narratives and use us as scapegoats. Never again will we hide our faith out of fear. Never again will we walk peacefully to our slaughter. Never again will we wait patiently and for way too long for someone else to rescue us. Never again will we allow others to exterminate us just for being Jews. Don’t fool yourselves — that is exactly what is happening now: an attempted extermination of Jews. The rockets being aimed at Israeli cities are not discerning or strategic; they are aimed at Jews. They are not aimed at military facilities or even government offices; they are aimed at my father, my siblings, my family, and my friends. Regardless of your opinion on the Israeli government’s policies, a blanket attack on all of Israel’s citizens and on Jews around the world is pure antisemitism just as the Holocaust was. The difference is that this time, we’ve learned from history’s mistakes and are prepared to defend ourselves.

Since the days of Abraham, Isaac, and Jacob, people have not wanted the Jewish people around. The Babylonians exiled many of us but we came back (see Babylonian Exile). The Persians tried to kill us but we prevailed (see Purim). The Syrian Greeks tried to wipe us out but we survived (see Hanukkah). The Romans exiled most of us and renamed Judea as Palaestina to erase the Jewish connection to the land. The Europeans didn’t want us (see Crusades, Edict of Expulsion, French Exile, Spanish Inquisition, Soviet pogroms, ghettos, Holocaust). While trying to escape the genocide in Europe, many were turned away by the rest of the world (see M.S. St. Louis, Exodus 1947). Post-war, almost 1 million Jews fled their homes in Algeria, Egypt, Aden, Syria, Libya and Morocco to escape persecution (see Operation Magic Carpet, among others). In the 1970s, 150,000 Soviet Jews and thousands of Persian Jews were forced to flee persecution and institutionalized brutality (see…my parents). Currently, while Jews make up only 2% of the US population, we warrant 60% of all religion-based hate crimes (see FBI 2019 Hate Crime Statistics Report). That’s an increase of 41% since 2015, and the stats in the rest of the world are not far behind. The silence of the world is deafening. There are no marches for us. There is no outrage for us. There are no movements for us. Everywhere we go, we’re not wanted. Everywhere we walk (from personal experience, even the Upper West Side of NY), we hear “f***ing Jews” and “go back where you came from.”

So, dear world, if you tell us to “go back where we came from” and then tell us that we have no right to be in Israel, where exactly would you like us to go? Perhaps “from the river to the sea” isn’t just a catch phrase either…

About the Author
Natanella is an American Jew and the daughter of Russian and Persian-Israeli immigrants. She is a graduate of Hofstra University and Brooklyn Law School, and is a life-long Zionist with dreams of one day making Aliyah.
Related Topics
Related Posts
Comments