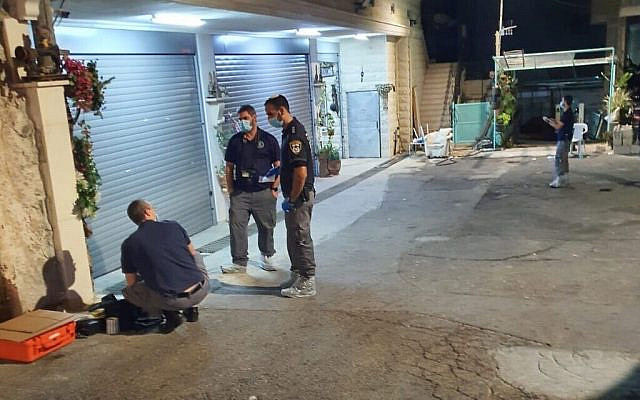 Police at a fatal shooting in the Galille town of Bi'ina, October 4 2020. (Courtesy of Times of Israel and Israel police).

Ahmed Hijazi, 22, was a nursing student studying for his final certification exams when he heard a gun battle raging outside his house, in Tamra. He went to the window, to see what was happening and was killed by a stray bullet. Nimr Suleiman was sitting in his house in Reineh with some friends, when the front door was shattered and armed gunmen sprayed the room, killing him instantly. Apparently one of his friends was the target. These stories have become a common occurrence in Israel’s Arab towns. 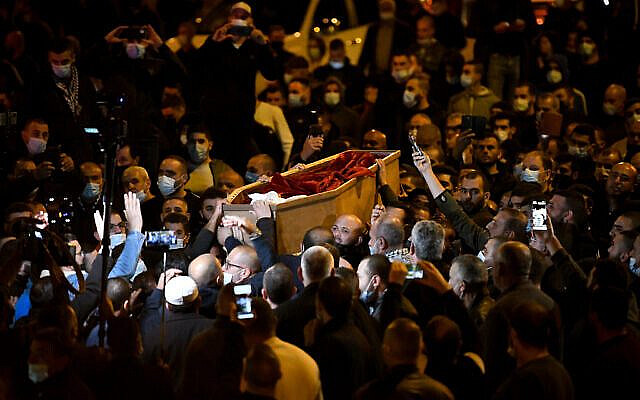 When the Bennett-Lapid government took office, it inherited many problems left unaddressed by the previous government. Over 250,000 unemployed, the lack of a national budget, and a budget deficit of over 160 billion shekels are not the least of them. But it is the “landmines”, problems not immediately visible and lying just below the surface, that threaten to throw the country into chaos.

One such landmine is the violence and organized crime in the Arab Sector. Left unaddressed for a decade by the previous government, which swept the problem under the carpet, it has become so deeply embedded in Arab society, that one cannot even contemplate how to start to deal with it.

Like a neglected garden left untended, and the weeds take over, so has violence and crime in the Arab sector been left to burgeon until it has become almost impossible to control.

The first signs of an upsurge of deadly violence were in 2011 when 67 people were killed in one year. For the next eight years, it averaged 64. 2019 saw a dramatic increase in deaths when 85 Israeli Arabs were either gunned down or blown up. In 2020, it reached 113 and as of now, 52 people have already been killed this year alone.

If so many Jews in Israeli cities had been killed, a task force would have been established long ago, with the Police, Shin Bet, and the Committee for National Security all cooperating to rid us of the scourge. So, why has nothing been done – for ten long years?

If it was that the Police and the Netanyahu government didn’t know about it, perhaps they could claim mitigated responsibility. But they chose not to do anything about it. They chose to neglect the violence threatening the lives and livelihoods of 1.9 million Israeli citizens. I find that grossly irresponsible – even criminally negligent. Perhaps they thought that it wasn’t a priority, that it was an “Arab problem”, for them to deal with? The fact that only about 22% of homicides in the Arab Sector have resulted in indictments, as compared to 53% in the Jewish Sector, would seem to support such an attitude. How else can one explain such a disparity, if not that the police are more motivated to solve crimes in the Jewish Sector than in the Arab Sector? And, if this is so, it reveals endemic racism in government and the police.

Facing criticism about the impotence of the police in clamping down on the violence, the new Police Commissioner, attempted to deflect some of the criticism away from the police by revealing his considered opinion that the major culprits for the violence in the Arab Sector are former Shin Bet informants who have been resettled, and who are “carving out their territory”. If this is true, and if the Shabak protects them, effectively giving them immunity from prosecution, it would explain why the Arab sector’s criminal gangs are seemingly allowed to act with impunity and without fear of arrest. But, while this could be true, I don’t think it provides a full explanation for the police’s inability to contain the problem.

Some might try to provide the explanation that the police are stymied by a lack of cooperation in the community, where they are viewed with suspicion, probably because Arabs have been the victims of racial profiling and prejudice for so long. They might add that the police are reluctant to enter Arab towns and villages to enforce the law, for fear that they would be overwhelmed by residents rioting, like what happened in Dir el Assad three weeks ago. However, I find such that inconceivable. If the country’s police force concedes that there are “no go” areas where they fear to tread, they have capitulated to Organized crime in the Arab Sector. I don’t know which is worse; the endemic racism that effectively says that some citizens’ lives are worth less than others, or the fact that the police admit that they cannot rein in the violence in the Arab communities.

Others point to the easy and unlimited access to illegal weapons. They would seem to suggest that if only we could eradicate the availability of guns, crime in the Arab Sector would decline dramatically. Perhaps, but guns are not the cause, they are the means. And, for as long as Organized Crime, protection, and drug dealing are allowed to flourish, unfettered by law enforcement, other means of intimidation and enforcement will be found. Besides which, as ambitious a project as that may be, it would probably be impossible to make a real dent in the availability of weapons without the full cooperation of all the Arab communities.

Meanwhile, while people are providing excuses for why nothing is being done, people are being killed, among them innocent bystanders, young and promising individuals, caught in the crossfire, like Ahmed Hijazi.

The tragedy is that violence has become a part of the way of life in Arab communities. While it may not be “accepted”, or “tolerated” by the majority, it is recognized as a constant presence in their lives with acquiescence. It should be noted that although we highlight the vice-like grip that gangs seem to have on life in Arab towns and villages, on many levels, violence is culturally ingrained in Arab society. Honor killings still occur regularly, and however hard the police try to suppress the phenomenon, it has not been able to do so. Inter-clan rivalry (known as Hamullas) and the vendetta culture remain a part of Arab society’s tapestry, despite efforts to break the deadly cycle. Most attempts to do so are thwarted, as the families cling to their own traditional dispensation of justice. And then, of course, there is domestic violence which takes its toll. 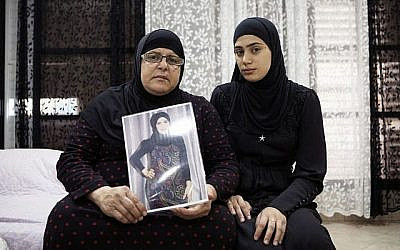 Duaa Abu Sharkh’s mother holds up a picture of her daughter. Duaa was killed by a masked gunman, suspected to have been hired by her ex-husband. (Courtesy of Times of Israel, AP Photo/Dan Balilty).

Up until now, violence in the Arab Sector has to be seen as “an Arab problem”. Now, too late, we are waking up to the fact that it is a national problem that threatens us all. Not only because the violence has begun to overflow into the “Jewish Sector” and Israeli cities, but also because the presence of such forces with seemingly unlimited access to weaponry threatens the safety of all Israelis. Not to mention the possible nightmare scenario of an armed insurrection, if clans and organized crime in the Arab sector form an alliance, an axis, with terrorist elements in the Palestinian Authority. Is there redemption? Not if the government continues to refuse to recognize the accepted Arab leadership. For any plan to work, the government will have to cooperate with the Arab High Follow-Up Committee and the National Committee of the Heads of Arab Localities – and these bodies will also have to break their policy of rejectionism and work with the government. It is a bitter pill to swallow, for both sides, but if we don’t work together the time bomb that is violence in the Arab Sector will explode and we will all bear the responsibility for the breakdown of our society.

About the Author
Paul Mirbach (PEM), made aliya from South Africa to kibbutz Tuval in 1982 with a garin of Habonim members. Together they built a new kibbutz transforming rocks and mud into a green oasis in the Gallilee. He served in the infantry during his army service, serving in both Lebanon and the West Bank, including on reserve duty during the first intifada. Paul still lives on Tuval with his wife and two sons.
Related Topics
Related Posts
Comments
Advertisement