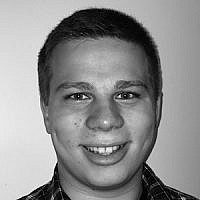 The Blogs
David G. Strinkovsky
Apply for a Blog
Advertisement
Please note that the posts on The Blogs are contributed by third parties. The opinions, facts and any media content in them are presented solely by the authors, and neither The Times of Israel nor its partners assume any responsibility for them. Please contact us in case of abuse. In case of abuse,
Report this post.

With daylight savings time upon us seeing the sun has become more of a luxury rather than just being an after thought on a beautiful summer day. Especially to those of us in the northeast, United States, that have been barraged by snow in recent times. With Hannukah not being to far away, the talk of light is everywhere, but yet with all the news of the violence in Har Nof , the atrocities ISIS is committing daily, and the shooting at Florida State University, I pose the question where is the light?

I had just returned from staffing an event for United Synagogue Youth’s (USY) METNY region when I had heard about what happened in Har Nof. Having spent much of my life as a USYer and now as a staff member the importance of community has always been a core value of my persona. Many were hit so hard by the news of the attack in Har Nof because the attack happened in a synagogue, not that any form of violence is tolerable. The word synagogue does not do enough justice to what the place really is, the word Beit Knesset, a house of gathering only begins to reflect the importance of such a place. A Beit Knesset is a place where I, and many of you, go for hundreds of youth/community events, for weddings, for funerals, our own bar-mitzvahs. Some of the greatest moments in many of our lives happen in the place that can loosely be translated to English as “a house of gathering”. The people that were brutally killed in Har Nof began a tefilah that ultimately would meet no end as their neshamot were brutally separated from their bodies. These people had children, wives, brothers, friends, they were just like anyone of us.

The synagogue in Har Nof that would usually be filled with tefilot and kavana were instead filled with blood and sinat chinam (senseless hatred). However even in the midst of such a terrible killing one light remained lit in a house full of darkness. The ner tamid, an ever lasting light that is within just about in every synagogue in the world. Regardless of if you are from Russia, Argentina, or Ireland, or consider yourself Reform, Conservative, Orthodox, or just a follower of your own Jewish beliefs the ner tamid remains eternal. I’m sure many of us, myself included, often don’t take the time to even acknowledge the ner tamid when we walk into shul. Even when we do take the time to look at the ner tamid we probably don’t spend very much time thinking about it as we are likely more focused on davening, self-reflection, or talking to a near by neighbor.

Whether we consciously recognize the presence of the ner tamid or not, the important thing is that no matter what the light remains lit. The question I first posed, “where is the light?”, is not simply answered by saying the ner tamid is in every synagogue. I believe that the question is answered by the notion that the physical manifestation of the ner tamid we have seen in many batei Knesset is just an external representation of the ner tamid that is within each of us. While we may be at a loss for words for what is going on in the world now in cases such as the Har Nof killings and whatever matters are present in our personal lives, the light within continues to burn while the external ner tamid reminds us of that.

As you gather and rejoice in Shabbat in the coming days, and then Hannukah in the coming weeks, recall that though candles are lit and go out, the flame of the ner tamid and neshama does not. May the memories of those taken from us in Har Nof and all others places be forever remembered by us in order to keep the ner of the Jewish people tamid.

About the Author
David Gertz Strinkovsky is an Technology Associate at KPMG working out of Montvale,NJ. He is a proud Syracuse University Alumni where he is majored in Information Management and Technology and studied Public Communication Studies for his minor. In his free time David has devoted much of his time to United Synagogue Youth having served on various boards, been a youth coordinator, and having lead USY pilgrimage groups all over Europe and Israel. Being trilingual (English, Russian, and Hebrew) has taken David far both professionally and Jewishly as he has studied at the Conservative Yeshiva in Jerusalem, worked in Moscow, and looks forward to every new cultural learning experience that will come his way.
Related Topics
Related Posts
Comments