Tel Aviv’s “White Night,” unlike its siblings “Nuit Blanche,” “Notte Bianca,” “La Noche en Blanco,” “Noaptea Alba,” and so on, carries a powerful message to many who still have a hard time accepting Israel as a vibrant civilization. It says: “we are here, well and kicking, in spite of media distortions, outright ignorance and ages-old anti-Semitism. We, the people, young, old, men, women, straight and gay, secular and religious, Jews, Muslims, Christians and atheists, enjoy life and contribute to culture and any way we can.”

“White Nights” festivals were born in Saint Petersburg, Russia, on the weeks around the summer solstice. In its high latitude, sunsets are late and sunrises are early. Darkness is never complete. Tel Aviv’s Layla Lavan (Hebrew for “White Night”) first festival was first held in 2003, to mark UNESCO’s awarding of World Heritage status to the White City, Tel Aviv internationally renowned collection of over 4,000 Bauhaus or International Style buildings. Tel Aviv’s slogan as “The City that Never Sleeps” becomes, once a year, a city where nobody sleeps.

The festival is spread throughout the city. I counted at least eighteen areas, from the City Harbor, the University of Tel Aviv and the Haaretz Museum in the north, to Jaffa in the south, from the beaches in the west to the new Sarona development area in the east. They included dancing, theater for adults and children, artworks, music, public singing, magic, image projections, DJ’s stages, art events, poetry readings, exhibitions and street performances.

My video covers only a fraction of what went on, an approximately ten-kilometer walk along Rothschild Blvd., the Habima Square, Dizengoff Street and Rabin Square. 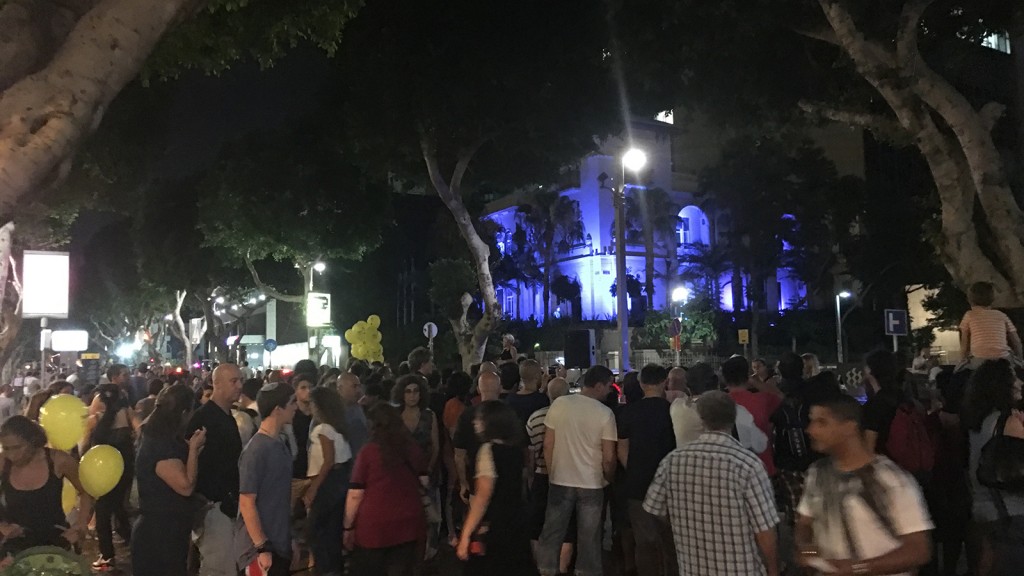 I can see what’s coming up in the next decade. According to the City Engineer, there are now under permitting process eight million square-meter of new construction (to get an idea of its meaning, a twenty-story high condominium on the Wilshire corridor has approximately twenty thousand square meters.) New construction will include multiple high-rise buildings. On one of the zoning areas, “the minimum” height is forty stories, including a ninety-story high tower.

Cities are not compilations of buildings, streets and open spaces; they are – or they are supposed to be – places where people can increase their chances of self-realization as happy human beings. Tel Aviv is on the way of becoming one of the world’s great cities.

About the Author
Rick / Reuven Meghiddo is an architect and a filmmaker of architecture documentaries. To date, he has produced over ninety architecture documentaries. Many can be seen in www.archidocu.com and www.architectureawareness.com As an architect, he practiced in Israel, California and Italy. Born in Argentina, Rick studied at the Technion and married Ruth Meghiddo, also an architect, in Jerusalem. He has a Master of Architecture from UCLA and a Dottore in Architettura from the University of Rome. He is also a LEED Accredited Professional and is licensed as an Architect and as a Real Estate Broker in California and Israel.
Comments