One day, Itamar walked into a candy store. It was an old store, about 75 years old, but it was well-kept and tidy; The glass of the counters and containers was cleaned every day and everything was organized and in its place. He was with his friend Bezalel. His kippa was askew, his glasses slipped halfway down his nose and his shirt, the buttons straining at his stomach, barely managed to stay tucked into his trousers. With his thumb, he stroked a limousine’s emblem that he had once stolen and kept in his pocket as a reminder. Looking around, his eyes grew wide in wonder at the vast array of goodies on display. There were so many possibilities, and so much he wanted.

Behind the counter was a portly old man with a crooked smile and purple-dyed grey hair, parted on the left, that was raked over his scalp to hide his baldness. Itamar turned to the man and started pointing. “I want that, and that, and that”, he said. And then he thought, “what the hell, I want more”. “Oh”, he said, “and also give me that over there, and that there on the shelf.”

“But you only have six shekels,” the old man said.

“But without those six shekels, you can’t keep the store open,” retorted Itamar.
Without hesitation, the old man, who was desperate to keep the store, relented and said “take whatever you want.” And Itamar promptly did and started raking everything he wanted into the sack he had brought.

Then, he turned to his friend who sported an uncouth beard, and asked, “Hey Bezalel! Do you want anything?” Bezalel stopped playing with his toy truck, which looked like a petrol tanker, and said, “Well, since the old man wouldn’t allow me to be in charge of the security firm that guards the store, I want the keys to the cash register.”

The old man handed him the keys, pleading in his eyes, hoping he wouldn’t ask for anything more. But it was not to be; Bezalel turned to him and said, “You know that other store you keep next door but that isn’t really yours? I want to run it.

And the old man, nicknamed Bibi, from a time when he was once a courageous soldier – and he had the scars to prove it – now a shadow of his former self, gave him the keys to the other store as well.

From behind Itamar came a voice. “I like this store,” he said, “so I want to decide who can enter it. And any expansion or renovations? I want to be in charge of that, too.”

The old man looked at the man behind the voice. He was an old accomplice from before. His name was Aryeh. He had a grey beard and a black hat that looked like a cowboy hat, and he wore a tattered orange jumpsuit, upon which he had scribbled with a black marker, the word “Zakai.”  Bibi knew this man – and knew that without his partnership, he couldn’t keep the store. So he agreed.

They all smiled and shook hands.

Rather pleased with himself that he had managed to placate his customers and would be able to keep the store open, even if it was ransacked, and all the tidy counters were now in disarray, Bibi reached for the phone to tell his supervisor, Boujie that he had done it.

But before he could dial, Itamar pointed outside. Outside, were two rather unsavory, uncouth individuals. Two B’s; Baruch and Benzi. They both had bushy beards and wore kippas. They were thugs, and they were trouble. In the past, they weren’t allowed to enter the store, because they intimidated other tenants and their unruly behavior always left so much debris and damage in their wake.

“I want you to allow these friends of mine in as well.” “They’re my friends, and if you don’t allow them in, I’m keeping my six shekels and you can kiss your lease on the store goodbye!”

And Bibi, already beaten and exhausted from all the effort to keep the store, said “t’Fatdal.” “Sure. I’ll change things around so they can be allowed in.” “We will have to take that pillar down, which will make the ceiling a bit unstable, but I can do it.” “Just let my name be the one on the lease, and let me keep the keys to the store.

And so they all agreed, and Bibi phoned Boujie.

Remember when Bibi mocked and berated the Bennett-Lapid government, saying that it was beholden, held hostage by Mansour Abbas, an *Arab* party, with “connections to the Muslim Brotherhood” that never were?

Well, this is where we are.

Bibi might be in the driving seat, but he is just the taxi driver. It is those in the back: Ben Gvir, Smotrich, and Deri (as well as Gafni), who are telling him where to go, and he is giving them whatever they want. 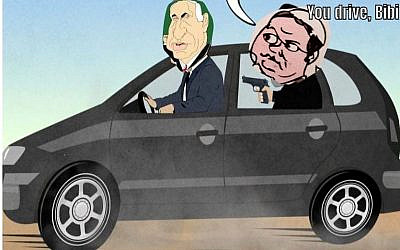 He might hold the position of Prime Minister, but it is these people who control the government and will set its agenda. We already have a titular head of state. His name is Yitzhak Hertzog. We really don’t need another, to act as a fig leaf for these extremists.

Two years ago, Ben Gvir was a “muktze”, and an undesirable element, on the outer fringes of our political spectrum and unacceptable. Bibi opened the door for him. Now, he is arguably the most powerful man in the country, with not only the police under his command as his own private army, but he also controls the government’s legislative agenda as alternate head of the government’s legislative committee with the power of veto. Bibi opened the door for Ben Gvir, and ben Gvir is now opening the door for fellow racist and supremacist thugs, Marzel and Gopstein – and others.

Deri, twice convicted for crimes of embezzlement and abuse of trust and power, has demanded that the country’s penal code be modified so that he can be a minister, making his sentence meaningless, and he will have veto powers over government decisions.

I am punch drunk by now. I feel like a boxer on the ropes, staggering, trying to stay up – and then another punch to my abdomen leaves me unable to breathe and reeling back on the ropes, as every day, we are made aware of another nightmare revelation about the coalition agreements. Every day another important tenet of our ordered, democratic society is being removed, as the extremists, who really are in control, use their majority’s raw power to change our country’s ethos and character.

And the Likud, a supposedly “responsible, ruling party”, a supposedly “democratic” party, with 32 seats, is ominously silent. It is the sound of complicity.

The results of the election were legitimate. But the legitimacy of the government is determined not by who sits in the government, but by what they do with the mandate they are given.

And this government with fascist senior partners in it, its tyrannical use of its majority, and its legislative agenda to fundamentally and radically change the core character of our country, turning it into a grotesque mutation of what it was, IS NOT LEGITIMATE. It is not working to serve the people, but rather to serve the political agenda of the extremist, sectorial parties in it.

About the Author
Paul Mirbach (PEM), made Aliya from South Africa to kibbutz Tuval in 1982 with a garin of Habonim members. Together they built a new kibbutz, transforming rocks and mud into a green oasis in the Gallilee. Paul still lives on Tuval. He calls it his little corner of Paradise.
Related Topics
Related Posts
Paul Mirbach