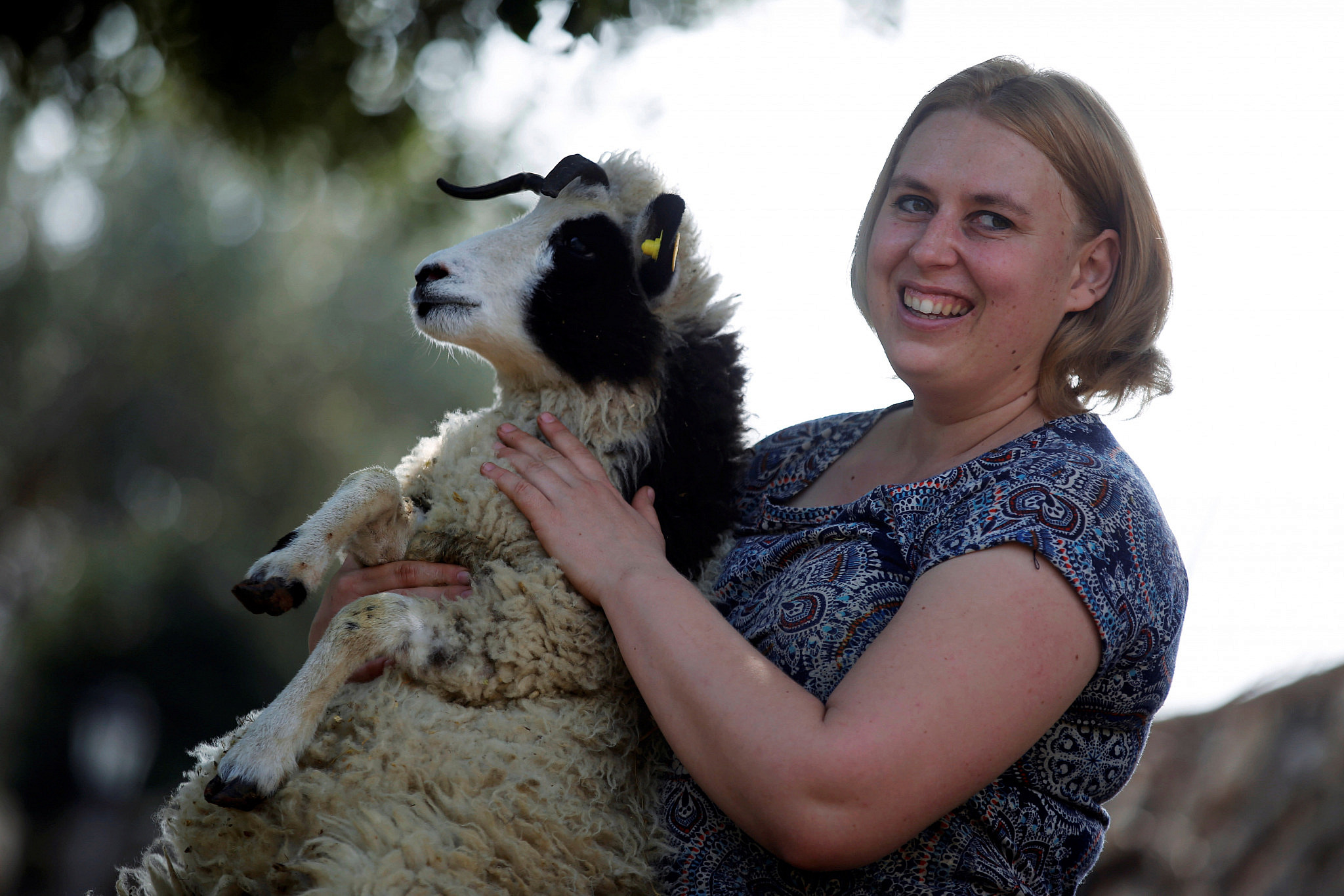 Jenna with one of her unique Jacob’s Sheep. (Courtesy Jenna Lewinsky)

Jenna Lewinsky is panicked, rightly so.  She’s facing eviction.  But its not a bank forcing her to give up her home.  She’s not done anything wrong.  In fact, she’s done everything right.  Many people have helped her to get where she is.  Jenna’s problem is unique.

Jenna is panicked because all her years of devotion to bring home and preserve a biblical species of sheep to the Judean mountains south of Jerusalem risks being pulled out from under her.  It’s not just about her physical efforts, or (emotional) commitment and devotion.  Her passion is driven biblically, and symbolic of so many things even bigger than she is.

Jacob’s Sheep are a distinct species mentioned in the Bible (Genesis 30).  Jenna discovered the sheep in Canada.  She investigated how they had been dispersed from the Land of Israel during the biblical exile of the Jewish people, and had become cherished around the world for their uniqueness; spotted and speckled just as in the Bible, with some having as many as five and six horns.  Jenna worked tirelessly to overcome bureaucratic challenges and raise the funds to bring them home for the first time in thousands of years.  She succeeded, and has been breeding them in the Land of the patriarchs and matriarchs, giving the lambs biblical names to connect them with the people to whom God promised Land. Today in Israel they are considered an endangered species.  Her flock is the only one in Israel.

The threats facing Jenna are not from enemies. They are not because of a pandemic. The threats are from friends.  The Israeli army.  Jenna is appealing the threat of eviction, not just on principle, but because she was given only days to pay for the security she needs, leave, or risk everything she’s worked to build being bulldozed.  Even without the sheep, packing and finding a place to live could well take more than a few days, especially with one of those being Shabbat, the day of rest when all work is suspended.  But moving the sheep requires extra steps to transport them, space to house and care for them, and permits.

Eviction often carries the stigma of doing something wrong.  Jenna’s problem is more basic. Simply, the army says that in order to remain where she is, she needs to provide security for herself and her baby which she has not yet done.  For most of the time on her farm, she was covered by security from those on an adjacent farm.  But the others have left and she’s now alone.

Indeed, the army is looking out for her, and being practical.  Perhaps it’s not reasonable for the army to provide resources 24/7 to protect her individually when it has a job to protect a whole country.  Or maybe, it’s a matter of priorities and allocation of resources.

Either way, because much of her support and financial recourses come from tourists, and tourism is non-existent now, as a single mother she does not have the resources to provide the security that she needs.

Bureaucracy has also gotten in the way because the very community leaders that put Jenna and the sheep on the isolated mountaintop overlooking Bethlehem, and who praised, celebrated, took credit for, and even raised money to support her, have (as of this writing) not stepped up to help prevent, or at least put off, her possible eviction. 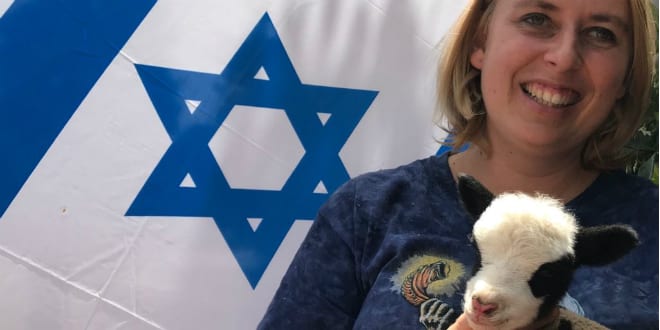 Jenna sees her work as a blend of modern Zionism and Biblical prophesy. (Courtesy Jenna Lewinsky)

In addition to being responsible for relocating a flock of biblical sheep, and her infant son, Jenna is feeling let down by the people who placed her there.  Hers is not just a biblical story, the literal return of lost sheep, but a modern Zionist story.  Indeed, the land that she was given on which to set up her farm is slated to become part of a large neighborhood that’s part of Efrat, a community of some 11,000 residents.  Jenna’s leaving, she says, “will make the mountaintop not just empty again, but will effectively cede the land upon which Efrat is zoned to build a neighborhood that will have it potentially 20,000 additional residents. That’s anti-Zionist.”

Does Jenna feel cheated, like the patriarch Jacob did with Laban, his father in law?  “No.  I’m thankful for the concern for our safety. But that’s never been my motivation.”  She’s been selfless in her mission, living without running water or electricity. It’s not as if she’s looking for something for herself.  She notes that “even in the pandemic, I’ve taken no government funds. Rather than asking for a handout, I’m able bodied and have two hands, and can work.”

Nevertheless, now, she can’t help but wonder if she and her sheep are simply caught in the crosshairs of something bigger that would have Israel scale back building in Jewish communities in Biblical Judea and Samaria in order to placate Arab nations and neighbors toward peace agreements.   She wonders if she’s become expendable because there is no tourism to Israel now, so the people who facilitated her being on the abandoned mountaintop don’t see a (short term) benefit in her being there by attracting tourists who once came to visit and volunteer.

Jenna believes that once she is gone, “Palestinian Arab shepherds and others who have intruded, making their presence well known to intimidate if not threaten me outright, will practically be able to take over the evacuated land.”  Her presence there, she says, prevents that.

In her mind, that’s not good for her, the sheep, and certainly not good for Israel.  The peace agreement with the UAE changed the paradigm of “land for peace” to “peace for peace.”  But she wonders if that’s true, and wonders if those who once helped her have not ceded the land in their minds, if not officially.

Jenna would like to stay where she is, with her sheep in the Judean mountains where they belong. But providing security alone is nearly an additional $5000 per month.  She is appealing to anyone who will listen and can help, at least to give her a reasonable period of time to relocate, given the expense and bureaucracy of doing so. Perhaps there’s still time to avert the evacuation by coming up with the money needed for her security. If not, the funds will at least help pay for her relocation somewhere that she and the sheep can be safe and thrive.

If you’d like to help Jenna and to protect and preserve Jacob’s Sheep, please click here to donate and share with others to do so, or for other information and updates please email jacobssheepgenesis123@gmail.com. 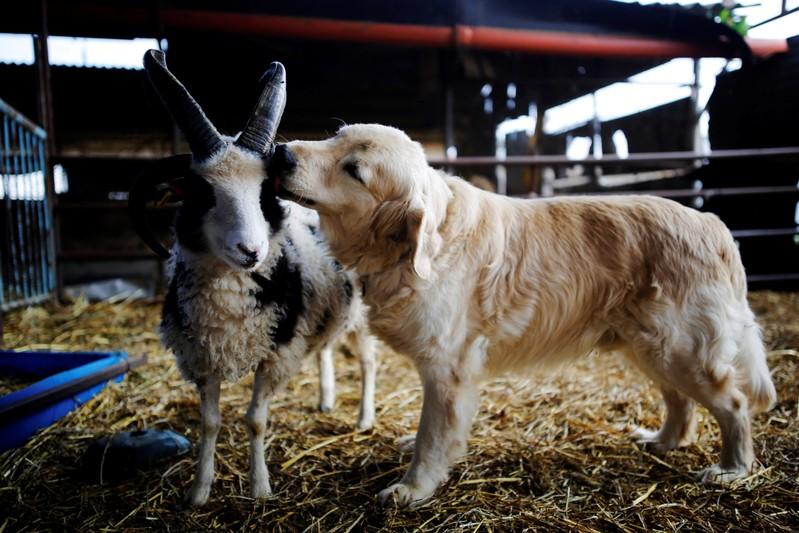 Jenna also has four legged helpers guard the sheep and her farm. But since they are not armed, they dont count. (Courtesy Jenna Lewinsky)
About the Author
Jonathan Feldstein made aliyah in 2004, married and raising six children in the Judean mountains. He is a long time Jewish non-profit professional. As president of the Genesis 123 Foundation he works closely with many Christians who support Israel, building bridges in ways that are new, unique and meaningful.
Related Topics
Related Posts
Comments