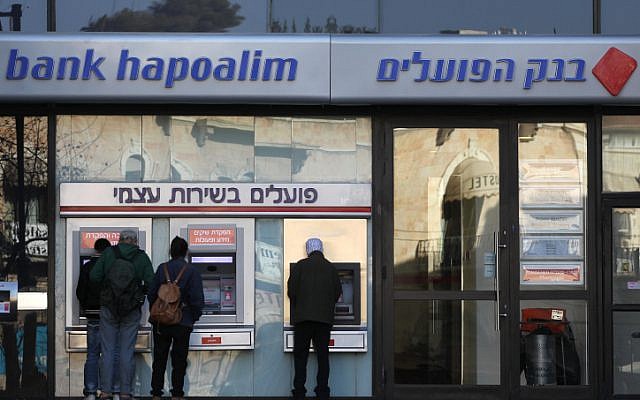 I’ll tell you a secret about one of my fetishes:

One of my favorite things to do when I go back to LA is this:

It’s air conditioned. The floors are clean. It’s quiet. It smells like paperclips and envelopes and organization.

“Oh darling, you already have!”

The banks in America are just the best. I sit in one of their little armchairs, and I just… relax. Because I know that all is well with the world, and my money is safe — especially because I don’t have any — and I am safe, and then I get a little bit bored and I doze off.

But rules are rules, and I have to leave.

First of all, when you go to the bank in Israel, you’ll see some guy snoring in one of the little metal chairs. You can tell how long he’s been there by how much drool has pooled on the floor by his feet.

There are usually two people reciting psalms. And another guy with prayer beads.

And the whole place reeks of cigarette smoke, sweat and desperation.

It’s like the shuk, only without the fresh strawberries, and with more yelling.

It’s especially hard if you’re an immigrant because #Hebrew

You have to prepare yourself three days before.

Drink a lot of water, and maybe call your doctor for some Xanax, because if you think the roads here are tough, you have never waited in line at Discount Bank on a Thursday afternoon.

I know I’m not the only immigrant who feels this way.

1. Because no one likes bureaucracy.
2. Because even if you like bureaucracy a little which is kind of weird, you will HATE it in another language.
3. Whoever said that Jews control the banks has never been to Israel.

They have never been told “you can’t make a wire transfer at this branch. You need to go to the branch in Atidim, but they’re closed,” and THEN, they have never stood in that very same bank where they were told they couldn’t make the wire transfer and called the bank’s main number only to be connected on the phone to the very same person who had told them “no” only five minutes before.

Whoever said that Jews control the banks has never tried to make a sizeable withdrawal only to be told “Sorry, you have to talk to Pinchas, but he isn’t here today,” or “Only Yafa can open the safe, so you’ll just have to come back Tuesday.”

Whoever said that Jews control the banks has never been told “It’s Thursday, kapara, and you won’t have the money in your account until Sunday — maybe Monday,” and then started crying even though you aren’t a cryer, because you literally have MINUS 12 shekels in the bank.

Everything will be OK my ass.

Doing it on the phone is even worse.

Why? Because Moti who probably majored in the Mosad starts grilling you over your identity to make sure it’s really you — (“When was the last time you took out money?” “Uhh… yesterday?” “How much?” “Not enough…” “Ok, what was your Bat Mitzvah Torah portion, Baruch Hashem…”)

And it gives me panic attacks to transfer money from dollars to shekels because even when you press 3 for English the transaction is always in Hebrew — or Russian (which I do not speak) — and I’m always afraid something will be lost in the translation.

Even the rubles I do not have.

Anyway, this morning, I was giving myself a pep talk about transferring money from dollars to shekels.

Closeup. I’m still in bed, tangled in my sheets and rocking the bed head.

“Kind of” (Emily is my middle name. And one of my secret identities. She smiles a lot and tends to her roses and minds her own business.)

“What’s up, girl! It’s your friend Keren from Israel Discount Bank — we see you received a transfer into your dollar account. Do you want us to just go ahead and move it over to shekels for you?”

For HELL YEAH please press ONE.

Now, there’s a chance that they charged me a thousand million shekels for this transaction or something, but I don’t care.

In fact, she gave me a glass of water during my last meltdown at my local branch. And she called me in the middle of the morning, to take some of the stress off of me.

Even if she thinks my name is Emily.

And this how it is Israel.

And it’s still true: The banks here are a mess. The lines are long here, and you best be in fighting mode with your nails did if you want to transfer money, and you better have a Xanax in your wallet, and there will always be some guy snoring in the corner.

Because the banks here are also HUMAN in all its glory. For worse… and for better.