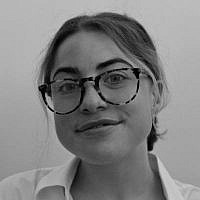 The Blogs
Peri Feldstein
Apply for a Blog
Please note that the posts on The Blogs are contributed by third parties. The opinions, facts and any media content in them are presented solely by the authors, and neither The Times of Israel nor its partners assume any responsibility for them. Please contact us in case of abuse. In case of abuse,
Report this post.

Almost every night at 9 p.m. we turn on our TVs and await further instructions from an all-male Israeli public health team, detailing protocols intended to maximize our safety. But just whose safety are we looking out for? The news has been overtaken with the enactment of endless security measures, but none address the specific concerns of entire segments of Israeli society who are routinely left behind in the name of national security.

The particular security concerns of women, especially marginalized women, are going unaddressed in Israel. Instead, at a time where they are the most vulnerable, women are being told that the protection of their rights and the easing of their fears are distractions from the crisis at hand. Somehow, it has become common practice to ignore certain civil, social, and human rights that affect the most at-risk during crises. We see it during every military operation, and we’re seeing it now in the struggle against corona.

We are repeatedly being told these days that the safest place to be is at home, but for women with violent partners, home is far from a safe place. Between increased access to family members, a near-total breakdown of support services, and added tension in the home, this pandemic has made abuse easier, and much more prevalent.

Women’s issues never seem to mandate immediate attention. They’re discussed as if they are tangential and unimportant. In actuality, according to media reports and data from the Ministry of Labor, Social Affairs, and Social Services, over 200,000 women are isolated in their homes with their abusers in Israel; and according to the Head of the Police Division of Community and Volunteers, there has been a sharp increase in emergency calls and police reports of domestic violence since isolation began. Battered women’s shelters are reportedly reaching maximum capacity and are struggling to stay open.

Whereas Scandinavian states have increased all essential social services with the understanding that in times of emergency, the strain on the most in-need is immense and the demand for aid is higher, the Israeli government has reduced the capabilities of violence prevention services.

Where does that leave us? Multiple young women have been murdered at the hands of family members lately, including 19-year-old Zamzam Mahamid in Umm al-Fahm. Israeli mothers are taking on an increased and imbalanced burden of childcare, many of them having to give up working to take care of their children at home. Those who have lost their jobs, especially single mothers, are struggling to pay their rent and support their families. Women living in poverty who rely on school lunches for their children’s nutrition have had to leave them hungry since schools were closed. Women who often elect to stroll busier streets for fear of their safety in public space are dreading their strolls and grocery-runs on now-empty streets. The list goes on.

These implications of the virus should mandate a serious policy debate, but instead have been completely ignored by policymakers. The message is clear: women’s security — occupational, economic, private, and public — does not warrant national attention.

The assumption of our mostly male decision-makers is that social issues have to wait, and there is always a “good” excuse as to why. But for many Israeli women, these measures define their security, and we can not afford to ignore them. Any plan that neglects the concerns of half the population is a failure.

Our inability to conjure solutions that are sensitive to gender, class, legal status, national origin, religion, and to the environment is creating consequences we will all regret. The UN has set seventeen goals for sustainable development by 2030 — goals like strong peace and justice institutions, clean and affordable energy, and gender equality. Good policy interventions are those that synergize co-benefits between them rather than create trade-offs. As we deal with corona today, we must take into consideration gender and socioeconomic related symptoms.

Because beyond health security, the corona crisis is affecting women’s safety in countless unique ways, and no amount of Alco-Gel is going to erase that.

About the Author
Peri Feldstein is a lawyer-to-be and a Fellow at Itach-Ma'aki: Women Lawyers for Social Justice
Related Topics
Related Posts
Comments