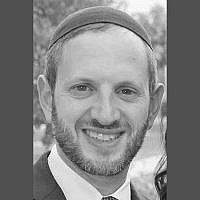 The Blogs
Judah Goldberg
Apply for a Blog
Advertisement
Please note that the posts on The Blogs are contributed by third parties. The opinions, facts and any media content in them are presented solely by the authors, and neither The Times of Israel nor its partners assume any responsibility for them. Please contact us in case of abuse. In case of abuse,
Report this post.

Though I emigrated from the United States to Israel over five years ago, I find myself unable to stop thinking about the recent U.S.  presidential election.  And I ask myself why.

Why do I care so much about the politics of a country that I no longer call home?

Is it because I know that American foreign policy has profound implications for Israel in general, and perhaps even more so for the West Bank settlement in which I live?

Is it because I continue to work part-time in the United States, and American tax policy could affect my family and me?

Is it because of our relatives and friends, as well as the millions of other Jews, who continue to reside there?

Or is it out of simple nostalgia and a persistent attachment to the land in which I was born and raised?

I think all these things are true, but after some soul-searching, I’ve concluded that none of them quite explain my obsessive thoughts.

In a striking statement, Maimonides argues that the rise of false messiahs, and, ultimately, Christianity and Islam, can be seen as steps along the long, winding path of history towards redemption:

Nevertheless, the intent of the Creator of the world is not within the power of man to comprehend, for His ways are not our ways, nor are His thoughts our thoughts. Ultimately, all the deeds of Jesus of Nazareth and that Ishmaelite who arose after him will only serve to prepare the way for the Messiah’s coming and the improvement of the entire world, motivating the nations to serve God together.

How so? Maimonides continues:

The entire world has already become filled with the mention of the Messiah, Torah, and mitzvot. These matters have been spread to the furthermost islands and to many stubborn-hearted nations. (Laws of Kings 11:4)

Furthermore, even though the other monotheistic faiths reject many premises of the Torah, they have succeeded in familiarizing huge swaths of the world population with its substance and spirit, thus bringing humanity ever so slightly closer to a time when the truths of our revelation are universally recognized.

In other words, according to Maimonides, the nations of the world matter. What they do and think, and how they act, matters, and the spread of Jewish concepts and values to them, through alien and even heretical ideologies, can be seen as playing some role in the redemptive process.

And while Maimonides’ perspective might be primarily practical, in terms of laying the groundwork for the Messiah’s arrival, I am inspired by his words to believe that the influence of a Judeo-Christian ethic in our world, both Jewish and non-Jewish, carries supreme spiritual import.

And that’s why, for me, America matters. Not because it is powerful, but because it has always stood for values that are not only enshrined in Judaism and the Abrahamic legacy but that are ultimately seen by our Sages as genuine reflections of godliness – justice, truth, charity, respect for human dignity, and many others.

The United States of America, collectively, has been one of the loudest and most consistent spokespersons in the world for these values over the course of modern history, and, as such, I think, has directed a certain reflection of godliness upon the entire world.

That doesn’t mean that there haven’t been egregious missteps along the way or that there aren’t fundamental differences between rabbinic values and America’s Judeo-Christian ethic. But just as Maimonides could appreciate certain positive aspects about the development of Christianity, so too would I like to see the rise and influence of the United States of America as some sort of step towards universal knowledge of the Divine – at least in the sense of “understand and know Me, for I am God, who exercises mercy, justice, and righteousness upon the earth, for in these things I delight” (Yirmiyahu 9:23).

And so America matters, and its choices matter.

They matter for the moral fabric and climate of the country and for the messages that they send to the rest of the world.

They matter to anyone who believes, as did Abraham, in God’s essential goodness and righteousness and wants to see His ways reflected as broadly as possible in and upon humanity.

In the wake of the election results, there are clearly many previously disenfranchised Americans who feel that their plights have been recognized and that they have been afforded new representation.

At the same time, it seems that in America, the line between truth — God’s “insignia” — and fiction has been irreparably blurred and that the abuse of women, contrary to any claims otherwise, will indeed be overlooked and tolerated.

Morally, was that a worthwhile trade-off? That question is what plagues me right now.

For when it comes to Israel’s future and the impact of American politics upon it, I can always deepen my faith in God and His providence.

But when it comes to the moral consequences of our choices, I have to remember that “All is in the hands of Heaven, except for [matters of] the fear of Heaven” — that we own our choices, and that what America chooses matters.