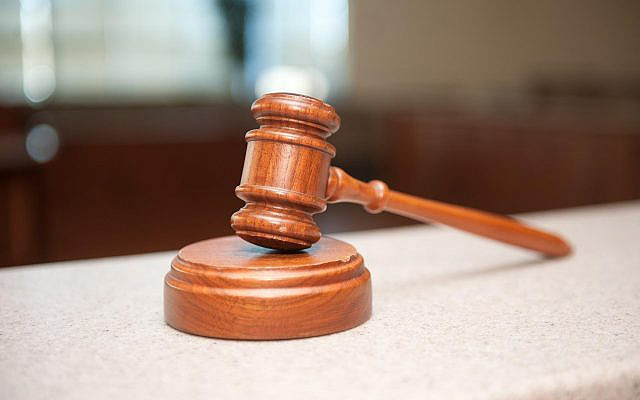 At the beginning of the book of Devarim, Moses reviews the history of the Israelites’ experience in the wilderness, starting with the appointment of leaders throughout the people, heads of thousands, hundreds, fifties, and tens. He continues:

I charged your judges at that time: “Hear the disputes among your people and judge fairly, between one person and another, whether the case is between two Israelites or between an Israelite and a foreigner residing among you. Do not show partiality in judgment: listen equally to the small and the great. Do not be intimidated by any man, for judgment belongs to God. Any case that is too difficult for you, bring to it me and I will hear it. (Deut. 1:16-17)

Thus at the outset of the book in which he summarised the entire history of Israel and its destiny as a holy people, he already gave priority to the administration of justice: something he would memorably summarise in a later chapter (Deut. 16:20) in the words, “Justice, justice, shall you pursue.” The words for justice, tzedek and mishpat, are repeated, recurring themes of the book. The root tz-d-k appears eighteen times in Devarim; the root sh-f-t, forty-eight times.

Justice has seemed, throughout the generations, to lie at the beating heart of Jewish faith. Albert Einstein memorably spoke of Judaism’s “pursuit of knowledge for its own sake, an almost fanatical love of justice, and the desire for personal independence – these are the features of the Jewish tradition which make me thank my lucky stars that I belong to it.” In the course of a television programme I made for the BBC, I asked Hazel Cosgrove, the first woman to be appointed as a judge in Scotland, and an active member of the Edinburgh Jewish community, what had led her to choose law as a career, she replied as if it was self-evident, “Because Judaism teaches: Justice, justice shall you pursue.”

One of the most famous Jewish lawyers of our time, Alan Dershowitz, wrote a book about Abraham,[1] whom he sees as the first Jewish lawyer, “the patriarch of the legal profession: a defence lawyer for the damned who is willing to risk everything, even the wrath of God, in defence of his clients,”[2] the founder not just of monotheism but of a long line of Jewish lawyers. Dershowitz gives a vivid description of Abraham’s prayer on behalf of the people of Sodom (“Shall the Judge of all the earth not do justice?” [Gen. 18:25]) as a courtroom drama, with Abraham acting as lawyer for the citizens of the town, and God, as it were, as the accused. This was the forerunner of a great many such episodes in Torah and Tanach, in which the prophets argued the cause of justice with God and with the people.

In modern times, Jews reached prominence as judges in America – among them Brandeis, Cardozo, and Felix Frankfurter. Ruth Bader Ginsburg was the first Jewish woman to be appointed to the Supreme Court. In Britain between 1996 and 2008, two of Britain’s three Lord Chief Justices were Jewish: Peter Taylor and Harry Woolf. In Germany in the early 1930s, though Jews were 0.7 per cent of the population, they represented 16.6 per cent of lawyers and judges.

One feature of Tanach is noteworthy in this context. Throughout the Hebrew Bible some of the most intense encounters between the prophets and God are represented as courtroom dramas. Sometimes, as in the case of Moses, Jeremiah, and Habakkuk, the plaintiff is humanity or the Jewish people. In the case of Job it is an individual who has suffered unfairly. The accused is God Himself. The story is told by Elie Wiesel of how a case was brought against God by the Jewish prisoners in a concentration camp during the Holocaust.[3] At other times, it is God who brings a case against the Children of Israel.

The word the Hebrew Bible uses for these unique dialogues between heaven and earth[4] is riv, which means a lawsuit, and it derives from the idea that at the heart of the relationship between God and humanity – both in general, and specifically in relation to the Jewish people – is covenant, that is, a binding agreement, a mutual pledge, based on obedience to God’s law on the part of humans, and on God’s promise of loyalty and love on the part of Heaven. Thus either side can, as it were, bring the other to court on grounds of failure to fulfil their undertakings.

Three features mark Judaism as a distinctive faith. First is the radical idea that when God reveals Himself to humans He does so in the form of law. In the ancient world, God was power. In Judaism, God is order, and order presupposes law. In the natural world of cause and effect, order takes the form of scientific law. But in the human world, where we have freewill, order takes the form of moral law. Hence the name of the Mosaic books: Torah, which means ‘direction, guidance, teaching,’ but above all ‘law.’ The most basic meaning[5] of the most fundamental principle of Judaism, Torah min haShamayim, ‘Torah from Heaven,’ is that God, not humans, is the source of binding law.

The Written Torah is min ha-shamayim, “from Heaven,” but about the Oral Torah the Talmud insists Lo ba-shamayim hi, “It is not in Heaven.”[7] Hence Judaism is a continuing conversation between the Giver of the law in Heaven and the interpreters of the law on Earth. That is part of what the Talmud means when it says that “Every judge who delivers a true judgment becomes a partner with the Holy One, blessed be He, in the work of creation.” (Shabbat 10a)

Third, fundamental to Judaism is education, and fundamental to education is instruction in Torah, that is, the law. That is what Isaiah meant when he said, “Listen to Me, you who know justice, the people in whose heart is My law; do not fear the reproach of men, nor be afraid of their insults.” (Is. 51:7)

This is what Jeremiah meant when he said, “This is the covenant I will make with the house of Israel after those days, says the Lord: I will put My law within them, and I will write it on their hearts; and I will be their God, and they shall be My people.” (Jer. 31:33)

This is what Josephus meant when he said, nineteen hundred years ago, “Should any one of our nation be asked about our laws, he will repeat them as readily as his own name.” The result of our thorough education in our laws from the very dawn of intelligence is that they are, as it were, engraved on our souls. To be a Jewish child is to be, in the British phrase, “learned in the law.” We are a nation of constitutional lawyers.

Why? Because Judaism is not just about spirituality. It is not simply a code for the salvation of the soul. It is a set of instructions for the creation of what the late Rabbi Aharon Lichtenstein zt”l called “societal beatitude.” It is about bringing God into the shared spaces of our collective life. That needs law: law that represents justice, honouring all humans alike regardless of colour or class; law that judges impartially between rich and poor, powerful and powerless, even in extremis between humanity and God; law that links God, its Giver, to us, its interpreters, the law that alone allows freedom to coexist with order, so that my freedom is not bought at the cost of yours.

Small wonder, then, that there are so many Jewish lawyers.

[3] Elie Wiesel, The Trial of God, Schocken, 1995. The story is believed to be fictional, although on one occasion Wiesel said that it happened and that he was there.

[4] On the subject in general, see Anson Laytner, Arguing with God: A Jewish Tradition, Jason Aronson, 1977.