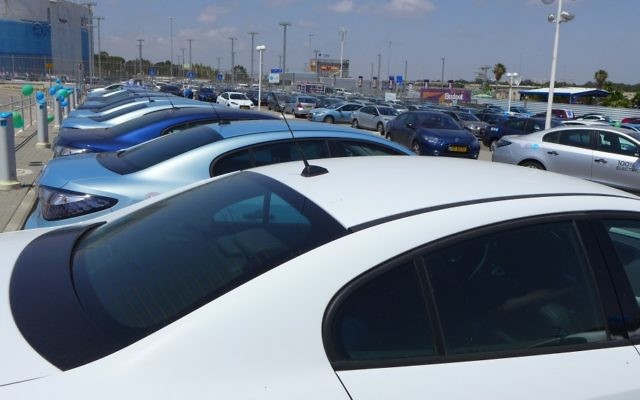 More than 150 Better Place customers gather before a convoy through Tel Aviv - Photo: Brian of London

It’s been two weeks since electric car service provider Better Place, one of the most famous icons of Israel’s “Startup Nation” culture of high tech innovation, declared bankruptcy and called in the receiver.

The court appointed receiver has guaranteed most operations until June 13th: so far all systems for around 900 drivers of Renault’s Fluence ZE battery powered sedan have continued to operate as before. Owners charge their cars at home for daily use and switch batteries in robot stations when necessary to drive the length and breadth of Israel in a car that can travel around 120 km on a full battery.

Currently the receiver is trying to run the company as efficiently as possible. She is more tightly constrained than a new owner would be. This week she closed four battery switching stations (the newly formed owners association managed to affect this decision when she tried to close the station at the entrance to Jerusalem). The receiver will soon release a large data pack and then invite public tenders: selling it as a single entity or breaking it up depending on the tenders given.

More than 150 Better Place customers gather before a convoy through Tel Aviv – Photo: Brian of London

Better Place spent huge amounts of money trying to conquer the entire world before proving their system could operate anywhere. Their execution of an automated system to swap batteries in electric cars in under five minutes, however, is astonishingly good. It really works: the question is could it ever have justified more than $850m of investment capital that seems to have evaporated.

Those customers who have received the service for up to 14 months absolutely love it. The press has been looking for the story of upset customers jumping for their lawyers but they really haven’t found it.

What they have found is a new organisation to represent the interests of owners. This was formed before the failure of Better Place and initially intended to lobby on behalf of all electric transport in Israel. It’s transitioned to representing owners of Better Place cars that remain the only significant number of electric cars in Israel.

This association “Go Electric” is also working with charismatic entrepreneur, Yosef Abramowitz, known as “Captain Sunshine”. He’s built large scale solar power in the Arava, navigating the labyrinthine halls of Israeli government bureaucracy successfully. Something Better Place notably failed to do. He, rightly in my opinion, points out the company should be running now as a lean start-up rather than a giant General Motors as it was before the crash.

But why do I think Better Place can operate the same service I receive today when it burnt through $850m to get here?

There are a number of acute operating problems today:

The switch station rents are completely outrageous. It would appear Better Place paid Tel Aviv apartment prices for dusty patches of dessert in the middle of the Negev. When they negotiated these locations, more than three years ago, Better Place was enormously rich and landlords knew it. The situation is very different today and one hopes all these leases can be re-nogtiated down dramatically.

Better Place also built an operation control room that looks like something NASA should have. I’ve been to mission control in Houston and I can assure you what Better Place built looks pretty similar. This may have been needed if it were to operate a million cars, but it is too large for the foreseeable future.

Battery stations are where owners can switch a depleted battery for a full one in under 5 minutes. There were 37 open to customers and 4 have been turned off to this point by the receiver. In the centre of Israel stations see a lot of use. Out at the edges in the north and south they are visited much less frequently. All stations are cooled by large air conditioners to a pretty chilly 16℃ to 18℃. This helps when batteries are fast charged after being removed from cars.

There is probably no real reason why lesser used stations are cooled so dramatically. It’s possible that turning the thermostat up at these stations would save a considerable amount of money.

Almost all owners would agree the service they were receiving from Better Place was truly outstanding. Even if service levels degraded somewhat, it would still be great. The current levels of maintenance staff and response times to failures are unsustainable. All the stations have been operating unattended since January with very few problems and speaking with company insiders its pretty clear they know it could be operated much leaner.

Today there are 1500 cars in Israel: 950 with customers, 200 owned and already used by Better Place and 350 unsold or waiting to go to customers. If we put all this together it’s possible that with only another 1000 cars on the roads this service could break even.

Which brings us to the role of Renault who were partners but had no direct investment in Better Place. Renault makes the only battery switchable car: the Fluence ZE sedan. They do have a brand new, smaller compact electric car on sale in Europe but it hasn’t been brought to Israel and nobody knows what they plan to do. Renault is a major creditor of Better Place and, uniquely, their debt is tied to the batteries already in each owners’ car and in the switch stations.

We don’t know the commercial terms under which Better Place received the cars. We don’t know if Renault will continue making the Fluence ZE with the battery drop system (Renault actually owns the patents specifically related to this part of how Better Place operates). All communication with Renault is met with coordinated responses clearly drafted at a high level by the company’s legal team.

Another key variable is the real value of the batteries that are owned by Better Place but sit in each of their customers cars and with an extra 300 or so within the switch stations. Arguably out of the cars and with no working switch stations they aren’t very valuable. The costs of collecting them to ship out of Israel would be high and as there are more batteries than cars, who would want another? Their value, therefore, is only realisable if the network continues and if drivers keep driving.

While estimates vary, its possible, with a modest investment of working capital, Better Place could be profitable in Israel with a few more cars on the road. Only Renault can decide whether this will happen.

There is also a large network of public slow charging spots: it’s very hard to value these. The public spots are occasionally useful but there is no guarantee they will be available to an electric car driver when he reaches one.

The public spots are not protected from being blocked by internal combustion engine cars. EV drivers call this problem “being ICEd” and the receiver mentioned this at the Knesset Economics Committee meeting as an example of the government’s lack of support for EVs in Israel. In some parts of Europe and the USA these spots are protected with penalties just like the disabled driver spots we’re all familiar with.

The upshot of this is without switch stations, most owners won’t rely on these often unavailable charge spots to travel beyond the range of their cars. In my case I can drive to Jerusalem and if I charge slowly in a parking lot for 2 hours I’ll make it home. If the charge spots are all blocked, I have a problem. I won’t make this journey electrically if the switch stations close and I wouldn’t pay to subscribe to a system that offered me only public slow charging without battery switch stations.

In the background Better Place still has some astonishing intellectual property though it seems some of this may be owned by a Swiss company. This is not bankrupt and the receiver is trying to include it in the break up.

To conclude, for the service I and other drivers appreciate so highly to continue, someone has to make a commercial bid for the assets that includes enough working capital and skilled management to take the operation to profitability.

If a bid like this can be put forward, and if it offers enough to the creditors to keep the breakup vultures from destroying Better Place, there is a chance to keep the dream of practical, countrywide, electric car driving continue in Israel.