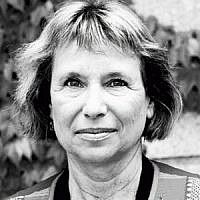 The Blogs
Fania Oz-Salzberger
Apply for a Blog
Advertisement
Please note that the posts on The Blogs are contributed by third parties. The opinions, facts and any media content in them are presented solely by the authors, and neither The Times of Israel nor its partners assume any responsibility for them. Please contact us in case of abuse. In case of abuse,
Report this post. 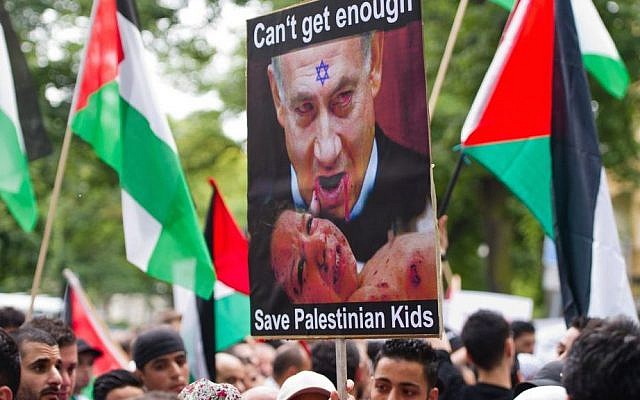 It is extremely difficult, these days, to be a politically moderate Israeli. As I publish and post my views on the Gaza war in newspapers and social networks, the amount of hate messages I receive, from both right and left, pro-Israelis and pro-Palestinians, is astounding.

For more than ten years I have been writing and speaking on European-Israeli dialogue, often in the context of the Israeli-Palestinian conflict. I am by now experienced in distinguishing between criticism of Israeli policies (which I often accept), sympathy for innocent victims of the conflict (which I strongly share), and stark, ignorant, generalizing “Anti-Israelismus” which easily lapses into full-fledged anti-Semitism.

The current war in Gaza has let all the demons out of their bottles once again. Peace-loving Israelis – and there are many of us – are caught between scylla and charybdis. Let me show you how this is acting out online, in my Twitter and Facebook accounts, and in comments to my articles.

As hostilities broke out I wrote that I grieve for all innocent Gazan victims of this conflict, especially the children, without any excuses, “buts”, or symmetries. Many people took my point at face value. Others, Arabs and Europeans, told me that my tears are crocodile tears and that Jews are performing genocide against Palestinians.

Jews. Not Israelis. The millions of Jews living outside Israel are as “uninvolved” as Gazan civilians, but they are currently accused, threatened and physically attacked for being Jews, hence guilty by association. An American or a Syrian can walk safely in the streets of Paris, Rome, and Berlin despite the killing of many civilians by the US army in Iraq or by Assad’s troops in Syria. A Jew wearing a kippa can no longer do that. If this is not anti-Semitism, what is?

Genocide. Not a bad, dirty war. Not a standoff between a regular army defending its civil population and a terrorist militia shooting from amidst a massive, poor and unprotected urban hub.

Make no mistake: the Israeli army certainly used excessive force and killed hundreds of innocents while trying to target militants and missiles, but Hamas made sure that its militants and missiles are placed right in the midst of its civilians. Those hapless civilians have no bomb shelters (the Gaza aid money went elsewhere, and construction materials were used to build attack tunnels), and they are often forced by Hamas to stay put when pre-warned by the Israeli army to move out.

These are the facts. Dirty war indeed. Even just wars – and I strongly believe that Israel had a casus belli for responding to the barrage of Hamas rockets launched on Israel in the last month – can become dirty wars. Jus ad bellum does not ensure jus in bello. But Genocide – no.

This couplet, “Jews” and “Genocide,” is becoming ever more popular these days in the hate-speech of certain Arabs and certain Europeans, who are eager to undo the Holocaust memory (mistaken by many of them for an invented Israeli alibi for aggression), and turn the Jews into mass killers. I would like to think that no German accepts this excuse for dimming and eradicating the real Holocaust, but I know that some Germans do.

Did anyone in Gaza, I wonder, ever get away with opposing assaults on innocent Israelis? Go unpunished for expressing sorrow for the dozens of Israeli children slaughtered by Palestinian suicide bombers in the last ten years? No need to wonder: the answer is no. Any Gazan opposing the Hamas war against Israelis, or merely questioning the wisdom of this war in view of the unfolding Gaza calamity, is punished as a traitor. Hamas silences its own people by execution.

Being moderate, as Aristotle already noted, does not mean being in the exact middle. Reality is never symmetrical.

For one thing, Hamas is far worse, as a government, than any Israeli government has ever been. The militants of Hamas and Islamic jihad in Gaza are far more brutal, on the ground, than the Israeli army. They surround their fighters with children, store their arsenal in schools and hospitals, including UNRWA institutions, and threaten or kick out any journalists who dare report it. They deliberately aim their rockets at Israeli kindergartens and clinics. If they had Israel’s air force and artillery power, the ensuing massacre of Israelis would dwarf anything we see in Gaza today. When I write these truths, some commentators brand it as Israeli propaganda. But I’d make a lousy propagandist. As a critical member of civil society, I never accept the official reports of my government and army wholesale, but truths are truths whatever their source.

Since Hamas is, fortunately, too weak, civilian suffering is asymmetrical too. Gaza is a disaster area. Israel is partially responsible. Saying this, with the crucial addition that Hamas is far more blameworthy, will remain true regardless of denials on either side. If Hamas and Hezbollah had the firepower and knowhow that Israel today has, I would not be writing these words. I’d be dead. Some “pro-Palestinians” would not mind that, for sure.

Let me be crystal-clear: I am pro-Gaza, wishing it peace, freedom and prosperity. I am anti-Hamas, wishing it to go to hell.

But what about the imprisonment of Gazans in their sad, crowded, battered strip of land? Years ago, I published an article in a German newspaper using the metaphor of the neighbor who sits on his balcony, his baby on his lap, shooting into your children’s bedroom. Would you shoot back at him? Yes, you would. My father, Amos Oz, has recently borrowed my metaphor (our family allows such borrowings) to describe the current round of violence.

My own article was intercepted, misquoted and attacked by Israel-bashers. How can I relate to the Gazans as “neighbors” when they are in fact Israel’s prisoners? Typically, the hate-responses ignored the rest of my article, which clearly said that this “neighborhood” situation is far from equal. Misreadings and misquotations are an integral part of anti-Israeliness and anti-Semitism these days. Historical facts are conveniently forgotten. Nuances are not part of the game.

Let me insist: History and nuances are crucial. Gaza’s 1,800,000 residents include many refugees of the 1948 war and their descendants. That war was started by Arabs, who rejected the UN resolution to divide the land into a Jewish state and a Palestinian state. Israel won. Palestinians fled, and some were driven out. For many years, Egypt ruled Gaza and did not allow its refugees to leave or to rebuild their lives. Since 1967 Israel and Egypt share the responsibility for this bad situation. But Israel pulled out of Gaza in 2005, only to see Hamas taking power and putting southern Israel under a barrage of rockets. Why not negotiate peace? Because Hamas wants Israel demolished and all Jews killed; its Charter says so explicitly. Also, to be fair, because Israeli governments and the Israeli public have grown more hawkish, abandoning hope to reach an agreement even with the relatively moderate Mahmoud Abbas in the West Bank.

But why bother delving into history? Today’s anti-Semites who masquerade as “anti-Israel” are not interested in history. They want the Holocaust to disappear, and the Jews to be guilty and remain guilty. This is a “new anti-Semitism” indeed, for it targets Israel as its big, bad, mega-Jew. But it is also a timeless, ageless anti-Semitism, because it is meta-historical, powered by psychology rather than facts.

Religion, I’m afraid, often plays an irrational role in this story. The Israeli-Palestinian conflict has never been about Judaism and Islam, but about territory and sovereignty. Today, fanatic Islamists have highjacked the Palestinian cause, while extremist orthodox Jews insist on settling every part of the biblical Israel at the expense of compromise. Some radical Christians are entering the fray too, unhelpfully theologizing their unconditional support for one side or the other.

Which is why moderate atheists like myself needs all the support we can get from moderate Muslims, Christians, and observant Jews. The dividing line in the current battle is not between the three religions, nor is it between the religious and the irreligious. It runs – this time it’s my turn to borrow a phrase from my father – between all fanatics and all moderates.

So why bother to raise a moderate voice, look closely at the tragedy of both sides (including the incomparable tragedy in Gaza’s ruined streets), and invoke historical facts, relevant truths, complexities and nuances?

Because I do not believe that most Europeans, or even most Arabs, are willing to be fed by lies and watered by hatred. Because as a scholar of the Enlightenment and a political liberal I believe that rational dialog, twinned with human compassion, is bound to win. Because as a humanist Israeli Jew, and a Zionist believer in the two-state solution, I expect that hope will win.

But only if we help hope win.

This essay was originally published on Christ & Welt and is republished here with permission. A German translation is online in Die Zeit.

About the Author
Fania Oz-Salzberger is an Israeli historian and essayist. She is Professor at the University of Haifa's Faculty of Law. Her last book, "Jews and Words" (Yale University Press) was co-authored with her father, novelist Amos Oz.
Comments