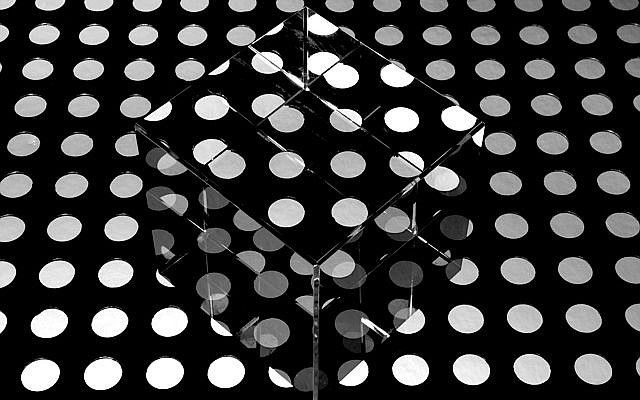 Keep a Very Open Mind: Most Things are Not as They Seem!

My wife and I recently visited the Paradox Museum — a museum of illusions that cleverly manipulates our eyes to see things that don’t make sense. It’s quite fascinating to test the limits of our own perception.

And then it dawned upon me that such illusions surround us everywhere we go. We’re constantly inundated by experiences that seem negative, but actually are positive.

When holding my toddler tightly so the doctor can inject her arm with a shot, a tear wells in my eye as she gazes at me with a look of shock and confusion that screams: “Tatty, I thought you loved me! How could you do this to me!?”

Without the opposing winds, an airplane would never be able to take off the ground and without headwinds, the sailing ship would barely progress. The athlete would never break his record if not for the strength of his opponent and, in hindsight, it was actually the fears you faced from the competitors that spurred you on to dizzying heights of success that you never dreamed of! The 19th-century German philosopher Friedrich Nietzsche was onto this deep truth when he famously declared that “what doesn’t kill you makes you stronger.”

This principle is a deep spiritual truth that lies at the core of our faith. As Jews, we fiercely believe in one G-d. This means that He alone has power over us, no one else. Not your doctor, lawyer, politician, competitor, or illness. G-d is Almighty—only He controls everything that happens to us. And since He is pure good, He only wants the very best for us. Thus, our Kabbalists declare that “no evil descends from above” (Shaloh 106:2).

Like my 4-year-old feeling angry and betrayed as we head home from the doctor, we too feel enraged and abandoned when we don’t understand G-d’s behavior towards us. But when we have the courage to stop and reflect on the bigger picture—how this world is truly one of the illusions and that what we see is not what we get—we can slowly approach a state of higher consciousness as we courageously reframe our setbacks into comebacks!

Perhaps this truth is reflected in the fascinating anatomy of the human eye, which sees everything upside down! Because the front part of the eye is curved, it bends the light, creating an upside-down image on the retina. The brain eventually turns the image the right way up. The retina is a complex part of the eye, and its job is to turn light into signals about images that the brain can understand. Thus, every single thing we see is literally upside down! In much the same way, our perception of reality is exactly upside-down: This peculiarity within our anatomy seems to be a built-in warning from our designer to be cautious of believing what we see!

With this proper perspective on reality, we can approach our personal struggles as well with purpose and poise. We saw this idea at play when we commemorate one of the saddest days of the Jewish calendar—the Tenth of Teves. On this day in 588 BCE, the Babylonian Emperor Nebuchadnezzar laid siege to the walls of Jerusalem and brutally starved our holy capital city of its vital needs for two and a half years until the walls eventually were breached and the Temple was destroyed on the Ninth of Av.

In recalling this event while exiled in Babylon, the Prophet Ezekiel uses a surprising term. In his prophecy (Ezekiel 24:2) he proclaims, “on this day the King of Babylon supported the walls of Jerusalem.” Why would he describe this catastrophic event as “supporting” the city? Seemingly he should have used a more negative term such as “destroyed” or “vanquished”! Ezekiel’s puzzling choice of wording seems to imply that the Babylonian conqueror was somehow aiding and assisting his Jewish victims.

In a magnificent sermon delivered on Sunday, December 26, 1982, the Rebbe explains that indeed, nothing happens in this world without G-d’s authorization. Anti-Semites are not private contractors. They cannot harm us if that was not G-d’s intention. Since G-d is good, the objective of our obstacles is to bring out the best in us, nothing else. He explained that G-d doesn’t send us troubles, He sends us opportunities. The siege of the holy city was not a destruction, but a construction of what was to come.

Quoting the Talmud in Gittin 55b, The Rebbe explains that Jerusalem was destroyed only because of the disunity that was rampant amongst the Jews— “For the sin of baseless hatred was Jerusalem destroyed.” When facing a greater challenge, warring factions tend to unite in order to fend off the attacker. G-d sent the Babylonian conquerors to the Holy Land to force our fractured nation to come together as one, but tragically we failed to get the hint. As a result, the Temple was indeed destroyed and we were sent into an exile from which we have yet to fully recover, 2500 years later. Straight roads don’t make skillful drivers.

Though our ancestors failed to get the coded message two and a half millennia ago, the ship has yet to sail. It’s not too late—instead of blaming them for their inactivity, let’s apply it now! Though we’ve suffered through twenty-five hundred years of persecution since the Tenth of Teves, it’s up to us to finally apply the inner message of the destruction.

The Code of Jewish Law (Beit Yosef, Orach Chaim 550) tells us that this particular fast is so important that it would even override the Shabbos, were it to fall out on a Saturday. Perhaps the reason for its being so paramount is because of precisely this message, which we’ve been missing for all these years! This catastrophe and its silent whisper heralded the template for all the anti-semitism of the next 2500 years!

Once the student graduates, the teacher is dismissed. The purpose of our troubles has never been addressed. It’s time for us to settle this once and for all! If we can finally learn this lesson, then there will be no further need for anti-Semitism. You and I can fix the error of our ancestors 2500 years ago and finally close the circle of our nation’s history!

Click this link to watch the 2 minutes video: https://JewishGardens.com/4098684

When a group of New York women attended a Ladies’ Convention in Detroit, they planned their trip to return home early Friday morning to be able to spend Shabbos with their families. They were deeply concerned to learn of a snowstorm that shut down the Detroit Airport, severely delaying their flight and making it impossible for them to be back with their families in time for Shabbos.

Out of desperation, Mrs. Miriam Popack called the Rebbe’s office for a blessing. When she explained the problem to the Rebbe’s secretary, Rabbi Binyamin Klein, she said that they were ‘’stuck at the airport.” He put her on hold for a minute and then came back on the line saying that “the Rebbe doesn’t understand what ‘stuck’ means?”

As she proceeded to elaborate, Klein stopped her and explained that the Rebbe speaks perfect English! “He doesn’t understand how you can be stuck because a Jew is never stuck! If you are in the Detroit Airport it’s because there’s something you need to do there!”

The ladies got the message! They immediately sprang into action and began sharing Shabbos candles with all the Jewish ladies in the terminal. Years later, some of the women they met that day, still light the Shabbos candles!

Nothing happens for no reason. G-d always has a plan, even when we don’t see it. There’s no need to go to the Paradox Museum to see distorted reality. You’re already in it as this entire world is an optical illusion, where we’re challenged by our designer to rise above our superficial perception and perceive that seeing is not believing!

About the Author
Raised in South Africa and educated in some of the finest Yeshivas in Israel, England, New York, and Australia, Rabbi Dovid Vigler strives to share the beauty and depth of Judaism in a clear, conversational, and down-to-earth manner. Whether in private counseling, relatable sermons, weekly email broadcasts, or in his popular Torah classes on social media, he reaches out to every Jew with unconditional love, patience, and compassion. His inspirational talks and uplifting messages can be found on YouTube.com/JewishGardens and Facebook.com/JewishGardens
Related Topics
Related Posts
Dovid Vigler