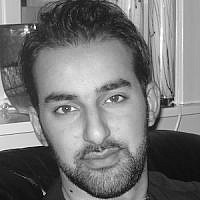 The Blogs
Waqas Sarwar
Apply for a Blog
Advertisement
Please note that the posts on The Blogs are contributed by third parties. The opinions, facts and any media content in them are presented solely by the authors, and neither The Times of Israel nor its partners assume any responsibility for them. Please contact us in case of abuse. In case of abuse,
Report this post.

It has been one week since the terrorist attack in Copenhagen that killed Dan Uzan, a Danish Jew. He was standing guard outside the city’s synagogue during a Bar Mitzvah gathering when a terrorist shot him dead in an act of unprovoked and blind killing for no other reason than Uzan being a Jew.

A week later and just across the sea, in Oslo, the Shabbat will be marked in a rather unusual way. A group of Norwegian Muslims have decided to take upon themselves the task of organizing a human “chain of peace” around the synagogue in an act of solidarity. The gesture will be carried out on Saturday on the completion of Shabbat.

The organizers are comprised of eight Norwegian Muslims; all of Pakistani origin except for one ethnic Norwegian convert. One of them, 17-year-old Hajrah Arshad, told a Norwegian newspaper:

We have taken this initiative not just as fellow human beings but also as Muslims to show that Muslims are opposed to the hatred Jews have to face.

Representatives of both the Jewish and Muslim communities have welcomed the gesture.

Abo Barirah, a Norwegian-born imam educated in England, writes: “Let us show what real islam is, not the Islam represented by ISIS/al-Qaeda or the way SIAN and Pegida have percieved Islam and Muslims. Hope for mutual respect for all people.”.

Similarly, Anne Sender, former head of the Oslo Synagogue, wrote, “This is a strong symbolic act that can impact future dialogue. You the youth are saying no to violence, hatred and conspiracies about what Jews are. You are trying to break down prejudices. We are both minorities in this country and have a responsibility to build a good community, and together we are much stronger.”

The first known mention of Jews in in Norway dates from the years following the inquisition when a group of Sephardic Jews were allowed entry to Norway. When the Norwegian constitution was formulated in 1814 a general ban was imposed on Jewish entry, lasting until 1851. The darkest time for the Jewish community came during WWII when Norway was occupied by Nazi Germany. From being a community of around 2,000 Jews before the war, the community was reduced to a fourth of its size in 1945. Presently there are around 1000 Jews in Norway represented by two synagogues, one in the capitol of Oslo and the other in city of Trondheim.

Muslims on the other hand have a population of more than 100 thousand and came mostly as job-seeking immigrants and refugees from the Seventies and onwards. While the first generation of Muslim immigrants typically took on jobs in factories and service industries, the second generation is typically aiming for higher education and has established themselves in various sectors.

Nevertheless we are both minorities and to a certain extent face many of the same challenges in practicing our religion. Both have been vocal supporters of halal/kosher slaughter and the permissibility of circumcision. While the Jewish community unfortunately has to struggle with anti-Semitism, the Muslim community is witnessing a huge increase of Islamophobia.

Through our faiths we also share a common history and heritage. The Jewish religion hails from a land admired also by Muslims. Just like Jews pray towards Jerusalem, every Muslim dreams of praying in al-Aqsa.

So let’s just face it. Destiny has bound us together. We must learn to live together in peace and harmony, recognizing each other’s religion, history and cherishing whatever we have in common. There is no other option. That’s why I and many of my fellow Muslims will show up on Saturday to protect our Jewish brothers and sisters.

About the Author
Waqas Sarwar is a Norwegian Muslim of Pakistani origin. He has a BA in Peace and Conflict Studies, is a social activist and aid worker and has a curious eye on politics.
Related Topics
Related Posts
Comments