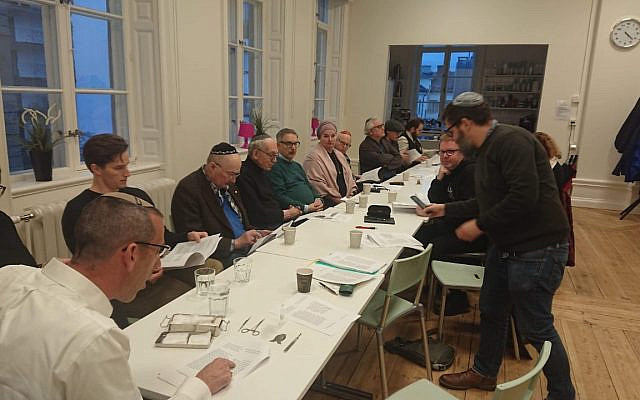 As I stood in the halls of the Swedish Parliament, I marveled at the responsibility that had been entrusted to me. The Jewish community here had brought my organization, Magen HaBrit, to work with local leaders to advocate for Brit Milah because once again it was under attack. About six months ago, Sweden’s Center Party proposed a bill outlawing all medically unnecessary circumcisions for individuals under the age of 18. The Jews of Sweden were understandably concerned, for as we all know, this is one of the ways things began in Nazi Germany. But the visit was not grim. In fact, I left feeling inspired and hopeful. Well, at least for a time.

The trip began with meeting members of the Green Party, whose fundamental platform is children’s rights. A member of the party had reached out to the Jewish community to be educated about why the ritual is so important to us. She feared her party would quickly follow the lead of the Center Party and support the proposed circumcision ban.

The meeting was a resounding success. Since the members of the Green Party were already on our side, it made the meeting more of an educational endeavor. We presented a detailed source packet defending Brit Milah from a religious, medical, and ethical standpoint. They promised to take the information and pass it on to their colleagues and work hard to stop the ban from being actualized. I pray that their work is successful.

The most memorable moment of my visit came at the end of the session when one of the party members quoted something in the presentation, “So, you’re saying that circumcision must be done on the eighth day. Then there’s no way the child can wait until he’s 18 years of age.” It was as if a light had gone on above her head. She understood how destructive this legislation would be to our religious expression. I left the meeting feeling that we had really made a difference in protecting Brit Milah.

My second reason for visiting Sweden was to teach the Jewish community how to stand up for itself and for our rituals. The first hour of the session was dedicated to learning the specifics of Brit Milah; the final two hours were an open forum to discuss feelings about the practice. When I first saw the schedule on paper, I couldn’t fathom how the last two hours were going to be filled. But filled they were.

There are two major issues surrounding Brit Milah in Sweden. The first is that the country, as a whole, is overwhelmingly secular. This detachment from any religious context makes the topic of Brit Milah much more complicated. Many of those who came to the session spoke of how they don’t even know where to begin when conversing with non-Jews about the ritual.

A substantial portion of the population of the Swedish Jewish community is intermarried. This makes for family tensions about whether or not to keep the tradition. One community member spoke of how, when his son was born, he and his wife had decided to give him a Brit Milah. When he told his non-Jewish relatives of their plan, they were dumbfounded. “I thought only the crazy ultra-religious Jews practice circumcision,” he recalled his relatives saying to him and his wife. The group informed me that this reaction is widespread. But what is so inspiring is that, despite these family tensions, he and his wife pressed on and gave their son a Brit Milah.

All of this work was deeply meaningful and gave me hope of working in other communities, such as Belgium, where similar issues are cropping up. But my bubble of inspiration was quickly burst upon my return home to Israel. I was shocked to learn that Magen HaBrit’s services may soon be needed in America, of all places.

There are many challenges to Brit Milah in the United States just as in the rest of the world. But the specific matter which gave me significant pause upon my return was the recently published article in Tablet Magazine, ‘Why We Didn’t Circumcise Our Second Son’ by Yagi Morris. The article details how Morris, who lives in Madison, Wisconsin, ‘struggled’, but ultimately opted out of circumcising her newborn son. Oddly enough, the family had chosen to have a Brit Milah for their firstborn when they lived in Israel; but due to the trauma (exclusively experienced by the parents), they decided not to do so for their second son.

Morris states: “Whatever history, beliefs, emotions, and narratives the foreskin may signify, it is, after all, a piece of skin. With or without the brit, our story as a nation will remain what it was and morph into what it is to become.”

I don’t think I’ve ever read a more historically inaccurate statement. The reason we exist as a people is due to mitzvot such as Brit Milah. They have sustained us as a people throughout the millennia. Only someone who lives in the luxury of freedom from persecution could make such a claim; that’s because our freedoms are only ‘free’ so long as no one is attempting to take them away.

This is not to say that no one should ever question Brit Milah. There are Jews all over the world looking introspectively at our entire tradition. That’s what we Jews have always done. But writing an article such as this, distributed on a global scale, which calls on other Jews to forsake the most fundamental Mitzvah that binds us as a nation seems over the top.

During my time in Sweden, I met with some of the leaders of the Jewish community. Do you know how they speak of Brit Milah in the public square? It’s a completely unified front. There is almost no dissent whatsoever. This is because the greater European society is once again turning on the Jew. The Swedes understand that Brit Milah is the battleground for our existence. When the freedom to practice Brit Milah is taken from us, then everything else could soon follow.

But what most people don’t know is that the rest of the world is only one step behind Europe. The anti-circumcision lobby is growing all over the world — and fastest in America. And people like Morris, are actually driving the stampede along. It bears mentioning that there was both a Democratic presidential candidate and Knesset hopeful in Israel who were both openly opposed to circumcision. Many will argue it made no difference because neither had a shot at being in government, but these things still add up. All of this discourse normalizes anti-Brit Milah and antisemitic rhetoric on a larger scale. The language Morris used of “his body his choice” is the credo of the anti-circumcision movement. So don’t be fooled, Morris did not just ‘opt out’ of her son’s Bris, she has completely bought into the anti-Brit Milah philosophies.

What is additionally disturbing about Morris’ piece is her insistence that secular Jews who continue to do Brit Milah are failing in some way, that if they were only as strong as she, then they’d give up everything. In what universe is this a positive attribute? Would she say the same thing about having a Passover Seder, because 90% of the Jews in Israel do that as well? In fact, the exact opposite is true. Whatever we keep keeps us as a people –– especially Brit Milah. And until we realize, as the Swedish Jews have, that we’re all in this together, then the Jewish community is in grave danger from within and without.

This blog details a trip to Sweden which occurred just prior to the COVID-19 lockdown. Please God there will be a vaccine soon and we will all be able to travel freely once again and visit those we so dearly miss.

About the Author
Hayim Leiter is a Rav and a mohel in Israel , as well as an activist, and a Jewish educator. He founded Magen HaBrit, an organization committed to protecting both our sacred ceremony of Brit Milah and the children who undergo it. He made Aliyah in 2009 and lives in Efrat with his wife and children.
Comments