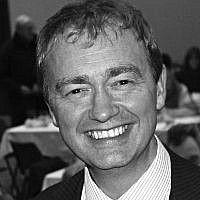 The Blogs
Tim Farron
Apply for a Blog
Please note that the posts on The Blogs are contributed by third parties. The opinions, facts and any media content in them are presented solely by the authors, and neither The Times of Israel nor its partners assume any responsibility for them. Please contact us in case of abuse. In case of abuse,
Report this post.

There is just one thing I cannot tolerate, and that is intolerance. It could be an angry twitter rant against someone who dares take a different view. Or, in its ugliest, most dangerous form, it is anti-Semitism and violence.

And with the disgraceful rise in anti-Semitism in the UK, there can be no equivocation. If it becomes your default position to, for example, use Holocaust Memorial Day to make a point about the treatment of Palestinians, you are feeding intolerance. And anyone with any historical sensitivity knows how dangerous that can be. It wasn’t so much one remark as a pattern of behaviour, a pattern I found unacceptable.

That is why I sacked David Ward as a candidate. Liberal Democrats want to build a world that is open, tolerant and united. That is why we are in politics.

With Brexit, there has been a rise in hate crime, and that disgusts me –  it is turning people against people. That is the very opposite of what the Liberal Democrats are about. It is literally our job to draw people together.

Within a liberal party you will, quite properly, find diverse views on the Israeli-Palestinian conflict.
What is not acceptable is when support for one or other side plays on anti-Semitic or racist stereotypes.

This point has been made to David Ward many times, resulting in his suspension from the parliamentary party under by my predecessor Nick Clegg. Ward always claimed to understand his offence, apologised and promised not to repeat it.

Ironically, he worked damned hard to represent his constituents in Bradford East, which is why his local party re-selected him.  But now we must find a candidate who, like me, believes in openness, tolerance and unity.