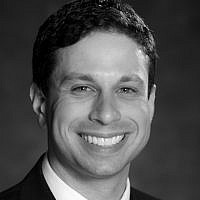 The Blogs
Daniel Cotzin Burg
Apply for a Blog
Please note that the posts on The Blogs are contributed by third parties. The opinions, facts and any media content in them are presented solely by the authors, and neither The Times of Israel nor its partners assume any responsibility for them. Please contact us in case of abuse. In case of abuse,
Report this post.

A few days ago AIPAC sent a number of emails to its 18,000 or so delegates as to which speakers we should expect to hear in Washington this coming week. Having attended Policy Conference for years, I shouldn’t have been surprised to see listed among the speakers Republican candidate Donald J. Trump. After all, it’s standard policy to invite congressional leaders, high-level US and Israeli administration representatives and, yes, major contenders from each party for upcoming elections. Hillary Clinton is coming. I shouldn’t have been surprised Trump is too. But I was. I was surprised, mostly, because of lack of any context, any mitigating language to explain why, after searching its collective organizational soul, AIPAC had determined it would approach this year’s conference as it has every other year. Because it’s not business as usual. This election cycle has been anything but.

No doubt, AIPAC has good reasons to invite all competitive candidates. It aspires to be bipartisan, and it wishes to get candidates from across the spectrum on record supporting its policies. So inviting them has been a good tactic in general, and to be sure Trump has been fairly indecisive on Israel as he has on many substantive issues and concerns. But at what point is a policy of inclusion so broad as to stand for nothing? Can an organization bolster a relationship between nations without acknowledging the human actors within and leaders of those nations? And what about the values undergirding that relationship?

Trump’s Israel rhetoric is, in his case, indicative of something much more insidious. Even as he has eschewed opportunities to denounce white supremacy and condemn violence (indeed he’s promoted it), he has fanned flames of bigotry, sexism and xenophobia. Trump wishes to be in power. And anyone who values power above principles, who will say virtually anything to get elected, won’t care whether he’s on record with particular talking points. And his supporters don’t seem likely to care either.

So yes, I was surprised to receive the email with the smiling headshot of Mr. Trump. And while I will attend the conference again this year, I’ll be skipping his speech. I’ll use the time to get a cup of coffee with a colleague or take a long walk around the Mall. Perhaps I’ll linger at the Washington monument and Lincoln memorial for a while, contemplating the legacy this country has inherited from its great leaders. I’ll think about my role as a rabbi and how best to continue to celebrate and support two countries I love. I go to Washington for Policy Conference each year to be inspired – by Israel’s miraculous survival and success, to be informed – by top-tier policy makers and thought-leaders, and to be engaged in the work of deepening the US-Israel alliance. Showing up for Donald Trump is simply not part of that agenda. Does AIPAC really believe it is?

About the Author
Daniel Cotzin Burg is rabbi of Beth Am Synagogue in Baltimore City and lives near his shul in the historic Reservoir Hill neighborhood. He serves on the boards of Jews United for Justice, The Institute for Islamic, Christian and Jewish Studies, and In, For, Of Inc. which exists to strengthen relationships between Beth Am congregants and their Central-West Baltimore neighbors. He Blogs as The Urban Rabbi at www.theurbanrabbi.org
Related Topics
Related Posts
Comments