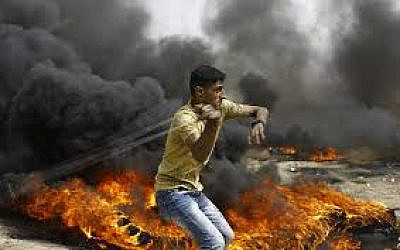 It has been obvious for a long time that Israel is lousy at dealing with the international press. In contrast, Hamas is able to get “poor Gazans” story after “poor Gazans” story published. Pictures of protesters looking valiant and dead children are particularly effective. I finally figured out why Hamas is so good at manipulating the press: Hamas always goes for the heart. Israel goes for the mind.

Then I got my second  clue. I contacted Jodi Rudoren, the head of the New York Times Jerusalem Bureau, copying Anne Bernard from the Times’ Beirut office, who had been sent to Israel to cover the Gaza war. I mentioned that the stories I had heard applied to “impacted” reporters. I received two responses from Bernard. Bernard denied that such pressure had been applied to members of her “team”, and that they were not “impacted.” She and I had a different definition of “impacted”.

The Foreign Press Association issued a statement that said, “The FPA protests in the strongest terms the blatant, incessant, forceful and unorthodox methods employed by the Hamas authorities ….  Some members of the press, including Rudoren, disagreed strongly with that statement, but it was consistent with what I had been hearing.

Rudoren was based in Jerusalem. On one occasion, she reported from an eastern suburb of Tel Aviv. I don’t know from where Bernard reported; but I don’t believe that it was inside Gaza. The Times got Gaza information from a Palestinian reporter who lived with his family in Gaza. I am certain that he knew exactly what happened to reporters who published stories that were NOT consistent with what Hamas wanted. The information obtained from him was relayed to the reporters in Jerusalem. From there, it was reported as news by the Times all over the world. No similar information was reported from the Israeli side of the border. Clearly, the New York Times Gaza reporting is, literally, one-sided.

I wasn’t able to put the clues together until 2018, when Hamas led the “Great March of Return.” Israel has a reasonable policy of not letting Israeli reporters into Gaza, where they could be kidnapped. Israel does allow foreign reporters in. A European  reporter who went into Gaza frequently explained how it works.

Foreign reporters are permitted to drive to Gaza, but they must leave their cars outside and walk into Gaza. There, they are met by a Palestinian driver who takes them where they want to go. I don’t know if the Palestinian driver is approved by or is a member of Hamas. I would be astonished if the driver were not. I do know that the driver is genuinely helpful.

Hamas tries hard to be helpful to the foreign press, even hiring Palestinian reporters to assist them. At least one such reporter is first rate, always sounding reasonable and likable. Her English is perfect.

The European reporter gave me an example of Hamas being helpful. One Friday before the weekly “Great Right of Return” protest, Hamas assembled members of the press to hear Yaha Sinwar, the head of Hamas in Gaza, talk to them. He is the lovely fellow who said “We will tear out their [Israeli’s] hearts.” Sinwar told the members of the international press to make sure that they got as close as possible to the barrier which separates Israel and Gaza. He also suggested that the members of the press not wear their press vests when they did so.

The European reporter, not wanting to be a human shield, wore her vest and helmet, but went as close as possible to the border. I had two reactions, neither of which I voiced. The first was, “Do you really think that because you were wearing your helmet and vest that you were not being human shield?” The second was, “He really WANTS you to get your head blown off. Of course, it makes a much better story if you are wearing a press vest, but since Israeli soldiers try very hard NOT to shoot members of the press, the odds of you getting your head blown off go way up, if you are not wearing a vest. Besides, without-a-vest makes a terrific story, too.

Getting the press close to the barrier allows Hamas to get the most pro-Hamas pictures possible. To its credit, the IDF, which does not want to see their heads blown off, does not let the press anywhere near the Israeli side of border.

In contrast to the way in which Hamas goes for the heart, Israel goes for the mind. The IDF is fighting an international image that they are tough, strong. unfeeling, and militaristic. Because Israel does not allow the reporters to go near the border, it provides interviews to members of the press. The person giving the interview is always an IDF soldier in uniform. Like all soldiers, he is trained to look strong and tough. As a good soldier, he reports facts objectively, aiming for the mind not the heart. Israel could hardly reinforce the bad-guy image more, if it tried. An example of the contrast in styles can be seen here: https://www.youtube.com/watch?v=1SlmBqgONmY

No wonder Israel gets clobbered in the foreign press.

About the Author
After spending an adulthood as a lawyer in Colorado where much of my practice involved the public interest, I made aliyah. As I child I was told by my mother, a German, Jewish refugee, that Israel was a place for her and her child. When I came here, I understood what she meant. Though I am retired now, I have continued my interest in activism and the world in which I find myself.
Comments