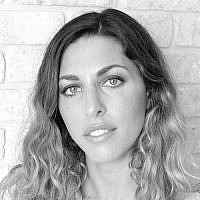 The Blogs
Lia Ciner
Apply for a Blog
Advertisement
Please note that the posts on The Blogs are contributed by third parties. The opinions, facts and any media content in them are presented solely by the authors, and neither The Times of Israel nor its partners assume any responsibility for them. Please contact us in case of abuse. In case of abuse,
Report this post.

When I’m scrolling through my Facebook newsfeed, nothing sickens me, or catches my eye more than a new sex abuse scandal in the Jewish world. There’s something so invasive, so humiliating, and so abhorrent about a religious Jew committing such a heinous crime. I feel a certain embarrassment reading the details, “Oh no! Not that community! My friend from camp lives there!” I skim through the article with a dread that at any moment I might see a name of someone that I know. The truth is, when it’s Jews, especially religious Jews involved, it’s personal. It’s mishpacha. And here’s the bottom line — there is something very sick happening in our mishpacha, and only we can change it from within.

Children are sexually abused everywhere — and to assume that within the G-d fearing Jewish community, the risk is lower is not only naive, it’s extremely dangerous. The days of teaching children about “stranger danger” are over. We now know that 90% of childhood sexual abuse is committed by someone who the child knows, and not a stranger, which is more uncomfortable to believe. It’s worse to think that someone we trust, someone in our religious circle is capable of violating and damaging a child.

But it’s the truth.

When we see how horrifically these cases have been dealt with – that victims were pressured to stay quiet, or that abusers were circulated throughout different communities instead of being reported to the police, many of us will proclaim “Those terrible leaders!” And yes, they are terrible. Anyone who protects a child-abuser over a victim is terrible. But it is the cultural discomfort with the subject that fuels this evil fire. Our leaders represent us, and it’s up to us to make our children the priority. At the expense of an abuser’s anonymity, at the expense of a Yeshiva’s reputation, and most importantly, at the expense of our illusion that sex abuse doesn’t happen in the religious community.

Last week I had the privilege to attend a Jewish Community Watch event about childhood sexual abuse, brought to Israel by Magen. In the past I had avoided these types of events. It’s uncomfortable, it’s unpleasant, and it’s downright depressing. But you know what? I left the event, and instead of feeling down, I felt invigorated. I felt angry and passionate and excited. I realized that we are on the verge of a huge break-through in Jewish history. The incredible people behind organizations like JCW and Magen are leading a revolution. Why are we complicating something so simple? Why are we protecting the guilty, and shaming the innocent? Why are we, the light unto the nations, allowing child molesters to live their dirty secret lives amongst our own vulnerable brothers and sisters, while our abused are left to live their lives in self-hatred, feeling abandoned by their own people?

JCW is pushing back. With the Wall of Shame, in which unrepented child-molesters are featured, JCW is sending out a very clear and very simple message: If you molest a child, you get no protection from us. In Israel we call it protexia – “knowing the right people” – well from now on, the child has full protexia. Their message is a beacon of hope for the hundreds and hundreds of Jewish abuse victims who have lost faith in both our community and G-d.

So why go to these events? Why not just get the “relevant” information online so that you can make sure your own kids are educated? Why sit through such an “uncomfortable” two hours when “it’s not your problem?” Because, as uncomfortable as it might be for you to endure accounts of sex abuse, imagine how the survivors feel, facing an audience of a hundred strangers, sharing their darkest and most private part of themselves. They are putting their pain, their shame, their fear on public display. Why? Because they believe that they can make a difference. That they can save someone else from suffering the same horror. Don’t we at least owe them two hours of our time to listen? To be moved, and feel their pain, and decide that no more innocent children should have to endure it?

If there is an event coming up near you, I implore you, take the time. Make the trip. Get the babysitter. And start talking about childhood sex abuse. Say it out loud to yourself in the bathroom mirror if you have to. It can’t be a taboo phrase anymore! This is a new era – one of justice in this world, as well as the world to come. It is our children at stake.

URGENT: THE LAST EVENT OF THIS JCW TRIP IN ISRAEL IS TAKING PLACE SUNDAY, MAY 3 IN EFRAT. SEE DETAILS BELOW. 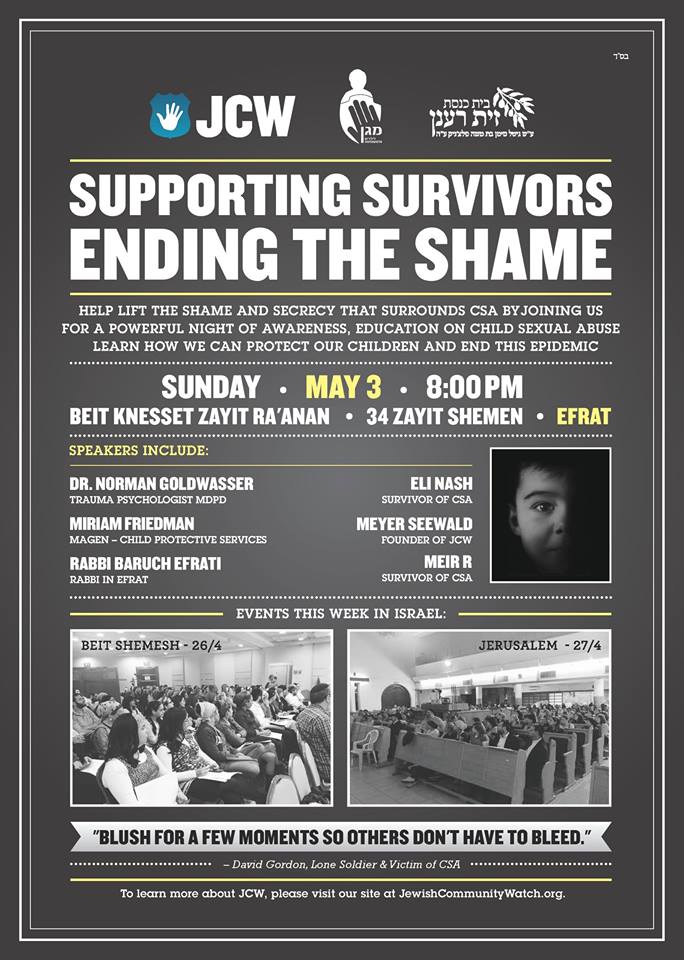