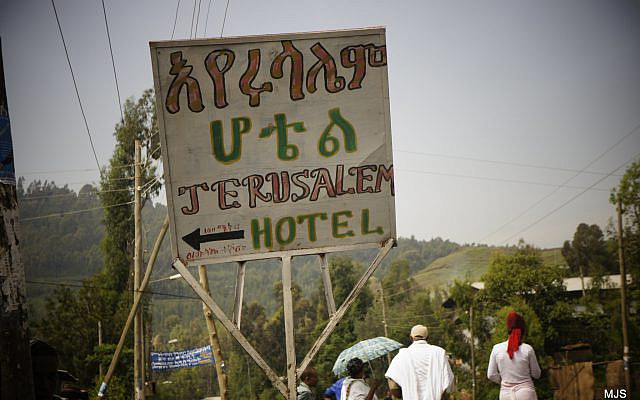 I am trying to save Jewish black lives. Not just me of course, it’s me and a few other Ethiopian Jews. But we are trying to save lives, directly. Not from a threat of police, but from imminent death of COVID. There are nearly 2000 elderly Jewish people in a village near Addis Ababa. Kechene is a small village with nearly 80,000 people living in near abject poverty because of persecution. They are Jewish or descendants of Jews and therefore are stuck in this modern-day ghetto, without the ability to move anywhere else. And while Addis Ababa has tall buildings, malls, cafes, highways, electricity, and toilets in most buildings, Kechene does not. This community is not yet recognized by Israel or the US for various political reasons, and so the community has no one. When COVID arrives, according to statistics in developed countries, 80% of the infected elderly will die. Considering there is no PPE, or running water or medical help, that figure will be much larger.

And yet, when I ask for donations, I am conflicted. On the one hand, the question becomes, why do Jews only help Jews? They don’t only help Jews and I’ll explain why. The other question is, why should I help Jews, they are rich. They are not, and I’ll get to that as well.

Do Jews only help the Jews? No. If you look at the work done by ADL by Jewish Family Service and Israel, Jews are very quick to help non-Jews with money and with resources. JFS in San Diego helps the poor with food, with counseling services, with finding work. It helps settle refugees and helps those at the border who seek asylum. ADL helps Muslims and Christians and people of all backgrounds. So Jewish agencies help non-Jews along with many other agencies but who helps the Jews? No one. This is why Jews seem to help the Jews all the time because no one else helps the Jews. No matter what happens in any country where Jewish people live, Jewish people are on their own. And Jewish people know this. This is why we spring to help. We know that if we do not help other Jews, there will be no one to help us.

Then there is the second question, why should Jews be helped when Jews are rich. It is true, some Jews are rich, but the vast majority are not. The median income in the US of a Jewish family is only $54,000. The average net worth is around $2 million which sounds high but that is because the average is offset by the few outliers and the fact that the average age of American Jewry is pretty high and older people generally are wealthier. Most Jews in America are solid professionals and middle class. This is accessible to most Americans except for black people who have been redlined into areas with poor schools for generations.

This antisemitic idea aside, the vast majority of Jews in the world are not rich. In fact, Israel is one of the poorest OECD countries. This idea that only Jews should help Jews and that wealthy Jews have an obligation to pay for Jews is part of the antisemitic ideas that go back thousands of years, where a few select Jews who acquired wealth, often were forced to spend it to buy out the Jews, because a Jew was never truly a citizen of a country, the country never really owed equal amount of obligation to the Jew as it did to other citizens.

And thus today, I am acting in the age-old tradition, of working to help Jews and asking people for help to help the Jews of Ethiopia, because after living in Ethiopia for over 2000 years, Jewish people there are still Falasha, foreigners, without the ability to depend on their government or anyone else, except another Jew.

Follow the link to the GoFundMe page to raise $10,000 for the Kechene COVID Fund.