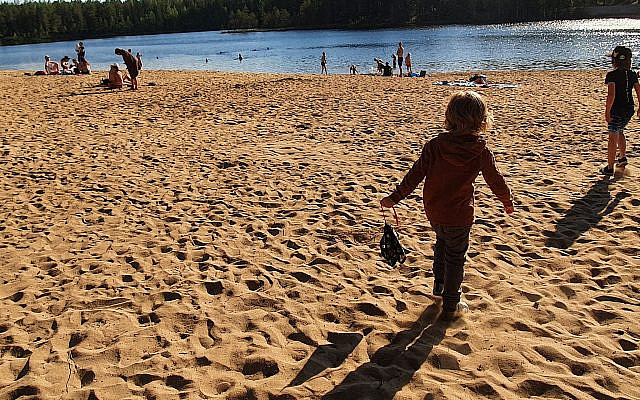 I get that question every now and then, from friends and relatives. Instead of answering that question, I want to argue on why I will stay in Sweden.

First of all — Sweden has its own problems. Rampant anti-Semitism in the city of Malmö. Borderline racism against the migrant influx of 2015. A party with Nazi roots in the parliament. Just to name a few…

But my life, where I live in the northern part is a completely different story.

First of all I live in a social democracy with a strong social security net available for all. The high taxes paid from your salary (29 – 34%) pays you back the day you put your kids in pre-school, visit the doctor or need to be airlifted by an ambulance helicopter.

My kids attend the public school — where every kid gets their own development plan tailored for your kid. They get a healthy and filling breakfast, lunch buffet and an afternoon meal. If you work shifts they can sleep at a “Nattis”, which is like a 2nd home. All kids gets an iPad where they do everything — there are no books.

There are no fees or tuitions for higher education at all. You actually get a subsidy for studying. You can choose to study on distance and you can combine it with a job – you can cut down working hours or cancel them for your studies and still have a job you can return to after you are done.

You get 480 paid maternal-/paternal-leave days per kid you produce and you are free to distribute them until they turn 12 years old. As a father you have an extra 120 days in order to encourage dads to be at home so your partner can return to work. This also covers LGBTQ parents where you get to choose what “role” is most suitable.

The collective agreement adjusts the salaries of all employees yearly – where the union and the employer agrees on a percentage raise. You have the right to negotiate an extra raise or bonus if you have a special skill or education too.

A full-time job is 40 hours per week, those hours include coffee-breaks and lunch. Your effective working time is then 32,5 hours/week.

You pay high taxes, because those are distributed to those who are less fortunate. One day, you will be there as well. It all evens out in the end.

Where I live, we don’t lock our doors. We leave the car keys in our car(s). We leave them on when its cold so they stay warm, and the same goes for when the temperature is high in order to keep them cool. Outside the supermarket, the pharmacy or wherever. I was a bit surprised first and it took me a long time to accept it — but now its natural. I had a discussion with a neighbor where I said “I need to lock the door, what if something happens?”, on which he replied “Yeah what IF something happens and I need to enter your house?” Mind-bending.

I live in the most equal country in the world, gender-wise and income-wise. My wife has a better salary than I have. It’s thoroughly expected that you receive all your rights as a citizen, but also do your duties as required.

I don’t tell about my job here, but a guy who holds a higher position is from Bosnia – while his boss is Somali. We are as equal as we can be. That leaves little place for civil unrest. Anyone can strike, demonstrate or do what they want – but the consensus is that we do it peacefully. There are exceptions as always – but those are rare when compared to other countries.

I live in a parliamentary democracy with an electoral threshold of 4%  — still there are 8 parties currently represented and spread out on 349 seats. That effectively eliminates the need for re-elections.

The army drafting is universal – everyone attends, no matter what religion, gender or country you identify with. If you are a citizen with a passport – you do your duty.

The economy is well-managed and the spending is scrutinized to the last krona (no, we don’t have euros). A right-wing coalition ruled for 8 years recently, they left a mess behind and the finace minister, Magdalena Andersson did a thorough clean-up in combination with strengthening the social security net.

Where I live, there are no homeless people. Kudos to the social workers for that.

Finally – I embrace, rather than disdain or being afraid when meeting the government – be it the police, the army, the tax agency or when registering sick days – which can be abundant. That’s right – if you are sick you stay home with a payment until you are healthy again.

That’s why I love Israel, but I choose to live here. Because I can marry anyone I love – there are no borders and no reactions to that. You can do it at the local council house or just filling in some online form and send it to the tax agency. You can also have the full show with a church, a rabbi or Ronald McDonald if you are up for that.

And yeah – the water is free, electricity is cheap and the recycling plants are serious. And Volvo, SAAB, Scania, Ericsson, Bofors and the Facebook servers are located here. In the start-up nation who competes with Israel yearly of who is most start-up’ish.