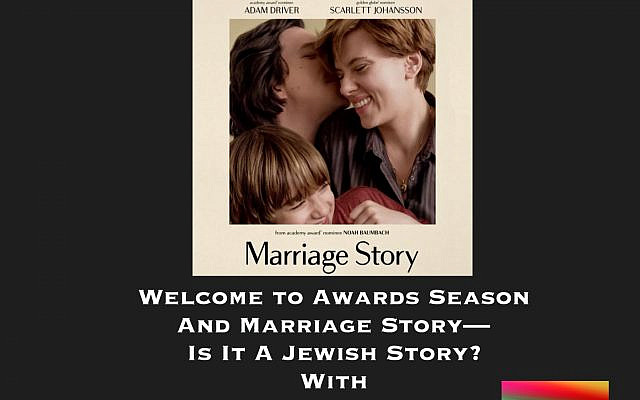 Award season for films is upon us …. and make no mistake, “Marriage Story” will be rewarded. It was actually a pretty good year in Hollywood. Several movies, all with great performances and good screenplays, will be talked about the most…and I loved each one of them. I’m taking about “Once Upon A Time in Hollywood,” “The Irishman” “Judy,” “The Farewell,” “Bombshell,” and what I considered to be the best movie of the year, “Marriage Story.”

“Marriage Story” follows the collapse of a marriage. But, it tells a much bigger tale… how a divorce destroyed in different ways, the professional and personal relationships of those involved.

It’s a hard movie to watch, not because of the great performances, not because of the excellent original screenplay, not because of the references to Stephen Sondheim and not for the great editing of the film. From the first scene, until the last closing credit, your eyes are glued to whichever screen you watched the feature. (It played in old- fashioned movie houses and was also released through Netflix) The film was art to watch.

It is painful to watch, and I still think about the messages of the film, which I saw weeks ago. Few films do that to me. That’s why it is the best picture of the year. It’s entertainment at its best.

Who doesn’t know someone who went through a divorce, or are you a child of divorce or are you divorced yourself?

Noah Baumbach wrote, directed and produced the movie which was loosely based it on his own experiences with his relationship with actress Jennifer Jason Leigh. Baumbach’s dad is Jewish, Leigh is Jewish and many of the themes of his works have Jewish overtones.

Divorce, for better or worse, is commonplace in Judaism, regardless of religious affiliations and one’s rabbi.

In “Marriage Story,” there is no mention of being Jewish, the New York location gives that “Jewish vibe”. For those who are Jewish and non-religious, the majority of men relate to the Adam Driver character. The male lead is successful professionally, and as his marriage crumbles, so does his ability to work.

Those with the best intentions to end a marriage civilly and amicably are convinced to go to war.

A proud man becomes a lost soul. A child becomes a pawn. A woman who thought divorce was a choice for fun and independence finds out life is not a fairytale and all do not live happily ever after. The only winners are the lawyers, with the assistance of a flawed court system.

Just because two people don’t want to live together, do they have to put their child through therapy, go bankrupt and change their entire life as they knew it?

For religious Jews, this movie has another meaning entirely.

Many orthodox women find life just the opposite. The flawed system of getting a get has made a woman the victim of a divorce in many situations. There are two strikes against them, two court systems. I have heard way too many times women having little to no contact with their children because they were either not the bread winner, or they were the one in the workforce and encouraging their spouse to learn, under the encouragement of a rabbi. Getting a get is impossible, even with modern prenuptial agreements.

The tables turn, and boom! Once an aishes chayil, now a community pariah.

Jewish children are put in positions of bargaining tools for money, time, and acceptance. Legal documents are filled with bogus religious requirements that were never followed pre-divorce.

In all cases, is it fair? Who is to blame?

These lyrics are written by Stephen Sondheim. They are from the musical, “Company.” They are sung by Adam Driver in the movie.

Nobody feels alive in a divorce, even the person who wants it. In the movie, the wife is portrayed by Scarlet Johansson, a Jewish actress, still hurts, as told to her lawyer.

We should want Johansson to win every award. After all, it was Scarlet Johansson who was criticized for opposing BDS and appearing in a Sodastream commercial. In January 2014, Johansson resigned from her Oxfam position after criticism of her promotion of SodaStream, whose main factory was based in Mishor Adumim.

We should watch the movie “Marriage Story” as a good piece of entertainment, but also rethink how we perceive marriage, divorce, and the current legal systems in both our civil and religious courts. It’s actually one area that all Jews, except maybe some Jewish divorce lawyers, should agree upon.

Cindy Grosz is a Jewish activist who promotes projects, products and awareness to everything Israel and of international Jewish concern. She represents celebrity spokespeople who speak up for and about Israel. She is also a contributor and Co-host on The Jersey Joe Show 710AM WOR, Sunday nights at 7 EST, or available anytime, anywhere through iHeart Radio.