One of the motivating factors to serve in the elite units of the IDF was clearly explained by Ofer Feniger (1943-1967). Feniger who was also an artist, teacher, and poet, served in the IDF as an officer in a Paratrooper reserve unit during the Six Day War where he lost his life at the age of 24 during the fierce battle of Ammunition Hill.

A book, “The Word Lived Within Me” published posthumously includes his art and a series of moving letters that he wrote over a period of years to Yael, who became his wife, describing his motivation, feelings and experiences. He sent this letter on January 21, 1963 to Yael during his compulsory military service in a paratrooper reconnaissance unit after visiting the Holocaust Museum in Kibbutz Lochamei Hagetaot (following the Eichmann trial). His conclusions were unambiguous:

I’m writing this to you because there’s no other person in the world I can tell what’s happening inside me right now… Whenever I attend our gatherings commemorating the Holocaust, I look into the eyes of those who were there and are now with us, and I see the terrible helplessness there.

From amidst all the horror and helplessness I feel a tremendous force surging up within me to be strong; strong to the point of tears; strong and sharp as a knife; calm and terrible. That’s what I want to be like. I want to know that those cavernous eyes will never again stare from behind electrified fences! For this I need to be strong! If we are all strong! Strong, proud Jews! Jews will never again be led to the slaughter! …We simply have to overcome everything.

This need, expressed by Feniger to be strong and serve in elite units to (over) compensate for the helplessness and powerlessness of the majority of Jews during the Holocaust period is a recurring theme that arises when I question the motivation of the soldiers on my Birthright trips to serve in elite units. On one of my past Birthright trips at Yad Vashem one of the Israeli soldiers, Dor, a sniper in an elite combat unit, told the group that during his high school trip to Poland he made a decision to serve in a combat unit to ensure the safety of the Jews in Israel and worldwide.

Below is the quote from the IAF pilots who flew over Auschwitz on the 60th anniversary of its liberation. Unfortunately, they were 60 years too late to stop the mass murder. However, the highly symbolic mission carried a powerful message about the times we now live in.

We, the pilots of the IAF, flying in the skies above this camp of horrors, arose from the ashes of the millions of victims, and shoulder their muted cries, salute their courage and promise to be the shield of the Jewish people and its land – Israel.” 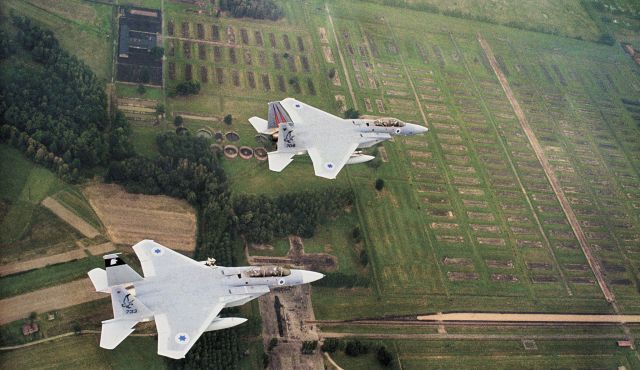 This level of motivation, inspired by the “Never Again!” motto of the post-Holocaust generations continues to be a large factor in the Israeli consciousness.   Daniel Gordis in his recent biography of Israeli Prime Minister Menachem Begin wrote that Begin ordered the bombing of the Osirak nuclear reactor in Iraq in 1981 to prevent a potential second Holocaust.

Begin was deeply scarred by his family’s experience in the Shoah, as the late Yehudah Avner eloquently stated, “the pall of the Holocaust clung to Menachem Begin like a shroud” (p.546, The Prime Ministers). The Nazis murdered both of his parents, his brother, and young cousins. He was spared from a similar fate only because he was deported to Siberia by the Soviets. Begin saw the State of Israel as the living proof that there will never be a second Holocaust as long as there is a strong Israel. He declared,

Let the world know that under no circumstances will Israel ever allow an enemy to develop weapons of mass destruction against our people. If such a threat reoccurs we shall take whatever preemptive measures are necessary to defend the citizens of Israel with all the means at our disposal.”